The ovens will once again breathe life and the fresh smell of sourdough perfume as the Village Bakery opens not one, but two new locations in the coming weeks.

Owners Patrick Lum and Teresa Gentile are on the rise, announcing the opening of a Montgomery Village cafe bakery and a second bakery at the former East Wind Bakery (3851 Sebastopol Road, Santa Rosa) in early fall.

The couple spent the last seven months quietly rebuilding both their business and their lives after losing their 3,500 square-foot production bakery and cafe in the February floods that displaced many tenants of Sebastopol’s Barlow market district.

“We had an opportunity to reinvent ourselves with a blank slate,” said Teresa, sitting in the forthcoming Montgomery Village cafe (most recently Michelle Marie’s Patisserie) that glows with warm light and nearly 60 seats waiting to be filled.

Though most impacted businesses returned to the Barlow within a few months of the disaster, the extent of their loss and Teresa’s subsequent heart condition (called Takotsubo Cardiomyopathy or “broken heart syndrome”) forced them to close their doors and lay off 60 employees. Without working ovens, they also put on hold 200 commercial accounts from restaurants like K&L Bistro and Stark’s Steak and Seafood.

It’s something that still makes Teresa feel emotional as she recovers from the cardiac syndrome thought to be caused by extreme stress and sadness. But the thought of so many of their longtime customers and friends returning, however, is the light at the end of the pastry case.

“We have so many faithful people we can’t wait to see,” she said.

The Montgomery Village location will be both a retail bakery, cafe and gluten-free baking facility; the Sebastopol Road space will feature their breads, pastries, and coffee (and a traditional bread-baking kitchen).

“We’ll have a limited number of breads at first, but for sure seeded sourdough, rye, whole wheat,” said Patrick Lum. He hopes to bring back English muffins soon as well.

The Montgomery Village Cafe, which has been in development since early 2019, will have a more extensive cafe menu that includes pastries, skillet dishes, sandwiches and other seasonal specials from Chef Zack McClintock (formerly of Beltane Ranch and Spinster Sisters).

The couple said that the shopping center’s owners, David and Melissa Codding, have been instrumental in the build-out and helping them get back on their feet. Inspired by a French country palette, the cafe features local artist Alex Cole’s artwork, which will be on exhibit (and for sale) through December 2019.

Between the two locations, the couple plan to employ nearly 30 people. They will have a kiosk with pastries and their signature heart breads at Pacific Market at the Town & Country shopping center.

“The goal now as humans is to align ourselves with good people,” said Teresa. That, and making the breads and pastries we’ve all missed so much. 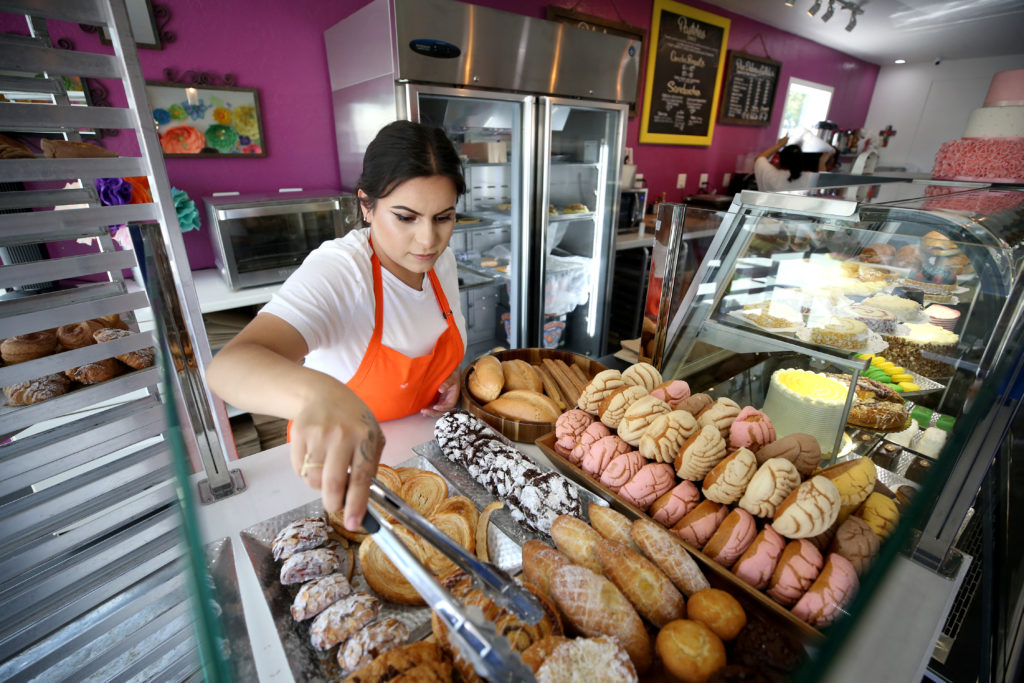