Omar Galvan’s dream isn’t to own a taco truck.

The 28-year-old food entrepreneur wants a fleet of quesabirria-laden mobile kitchens operating daily at breweries throughout the county. And he’s about to get one shiny red truck closer to that dream this month.

Galvan and his brother, Ivan, 24, own Galvan’s Eatery, a familiar sight at Shady Oak, Old Caz, Cooperage and Henhouse breweries. Known for their crispy shrimp tacos, birria grilled cheese sandwiches, loaded carne asada fries and meaty quesabirria, the young duo has a fiercely loyal following who track them through Instagram as they pop up at breweries in Petaluma, Rohnert Park and Santa Rosa.

That popularity has made it possible for the first-generation immigrants to purchase two food trailers in less than two years, at a total cost of $143,000, Omar Galvan said. The brothers bought their first 16-by-8-foot trailer for $56,000 with money borrowed from their family. They bought the second for $87,000 in cash from their profits and will add it to their schedule after they get it this month.

Omar credits a combination of book and street smarts for their fast growth. Industriously working long days, starting at 5 a.m. at their parents’ Windsor market and taqueria, helps as well.

“I have the street smarts, Ivan has the book smarts, and we’re both very detail-oriented,” Omar said on a recent broiling Sunday afternoon at Henhouse Brewing in Santa Rosa. Both brothers have business degrees (Ivan recently received his MBA) and were college athletes.

After working in tech at Paychex and Yelp in San Francisco, Omar decided to take a leap of faith in October 2020 and start a food business.

“Working at Yelp, I started understanding how small-business owners think,” Omar said. Growing up helping out at his parents’ market and taqueria, Martin’s, he has spent much of his life working in the food industry.

“We are a business-oriented family. At 13, I wanted to be a butcher at my dad’s store,” he said.

In a way, the pandemic proved propitious for the brothers to launch their first food truck. When Sonoma County COVID-19 regulations required breweries to offer sit-down, dine-in meals if they wanted to serve alcohol, food trucks had a new opportunity. Without on-site kitchens, breweries turned to food trucks to fulfill the mandate to serve food. Almost immediately, niche brewery tasting rooms became family-friendly brewpubs where dogs, kids and friends could gather at outdoor picnic tables for a pint and a few tacos.

“It just snowballed. People had to try new food at breweries,” said Omar, who launched his fledgling business in late October 2020. Galvan’s Eatery grew exponentially in the following two years.

“It’s all become very harmonious, and families are (at breweries) now,” he said. That meant adding kid-friendly grilled cheese sandwiches and quesadillas to their taco, torta and burrito lineup.

“I’m also here among the crowd, getting to know our people and what they like and don’t,” Omar said. When they’re not at the grill, the brothers chat with customers, some who’ve become new friends.

Near-constant social media communication has been a boon to their business. Their Instagram account (@galvanseatery) has nearly 8,000 followers and lists upcoming locations where they’ll appear, pictures of their customers and mouthwatering tacos sizzling on the griddle.

With their first food truck, a bright red truck they call Trailer No. 1, booked out for brewery pop-ups months in advance, the brothers purchased a replica, Trailer No. 2, that Ivan will manage. It’s slated to launch in the coming weeks, and the brothers are currently looking for two more employees to join their existing six-person team.

After the crush of afternoon orders and before evening diners arrived at Henhouse on that hot Sunday, Omar sat outside the truck and enjoyed a cold beer. He envisions the day when he and Ivan will own a large taproom with beers from all the breweries they’ve worked with and food trailers slinging birria and tacos from one end of Sonoma County to the other.

“We were destined for this,” he said.

Crispy Pancho, $4.99: The Galvan brothers named this dish for their friend, Pancho, who came up with the surf-and-turf taco combo that includes shrimp and birria, a tender braised beef. Historically, birria was made with goat or lamb but is usually beef unless specified. The meat is cooked with spices (usually cinnamon, clove, ginger and chiles) and served with consommé, a rich broth for dipping.

Carne Asada Fries, $15.99: Seasoned fries are the base for this mountain of food. They’re topped with bits of marinated steak (carne asada), mozzarella cheese, crema, pico de gallo and jalapeños. One serving is enough for a crowd. 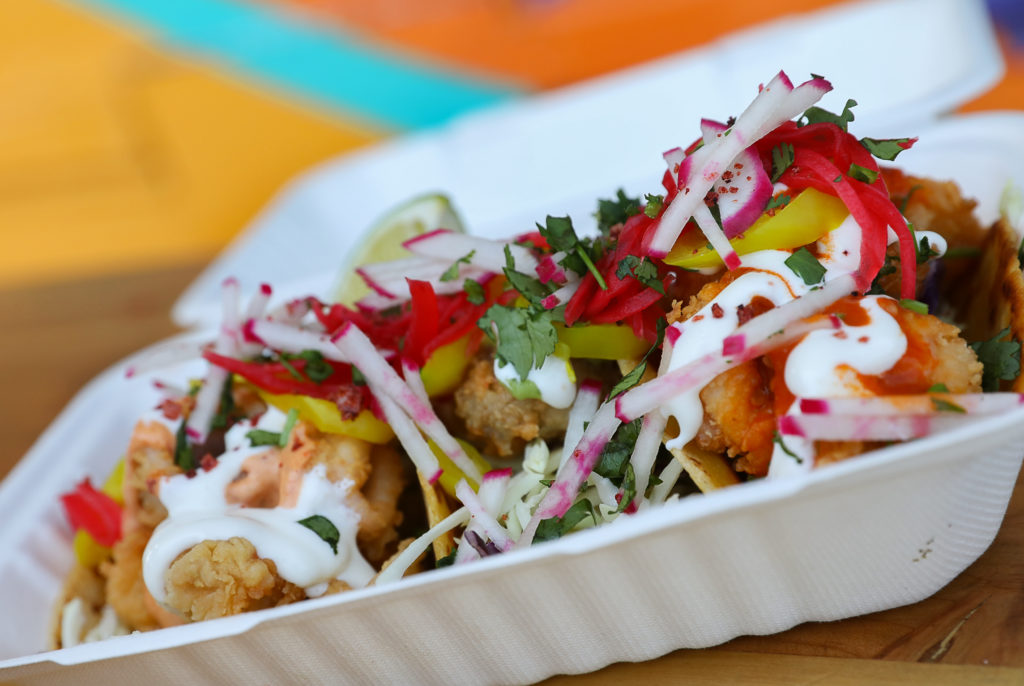 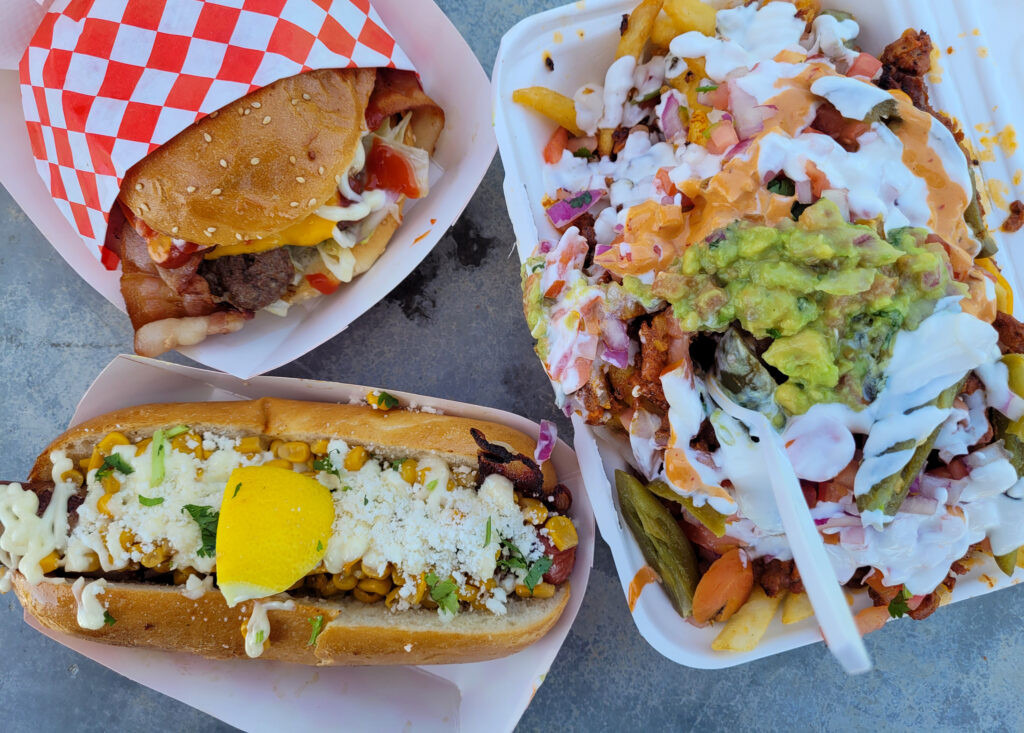 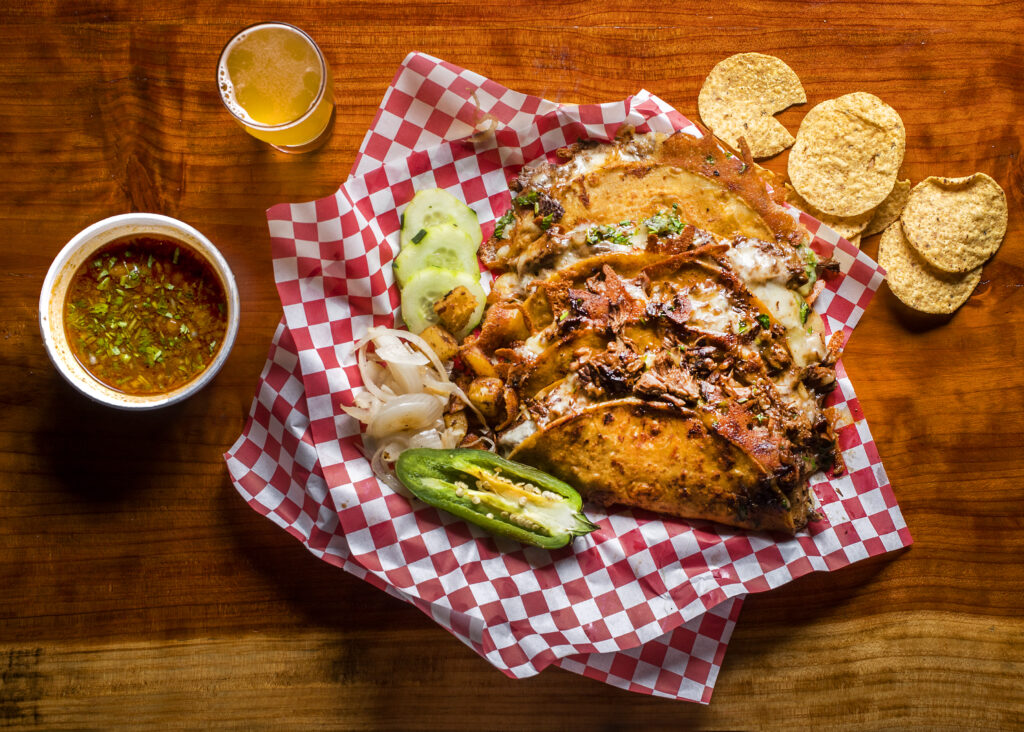