Lila Mathia runs a tight ship, or in her case, a 25-foot food truck. Her mobile business, Lila’s Streetside Eats, is currently parked, as it often is, in front of Parliament Brewing Company in Rohnert Park. She has less than one hour to finish baking her hand pies, warm the pulled pork for nachos, and make sure the hot pastrami Reuben dip is nice and gooey. Hungry beer drinkers are already knocking on the truck window asking when the food will be ready.

“We open at one o’clock,” she says brightly but firmly, closing the window and getting back to work.

Inside the gleaming stainless steel galley kitchen, Mathia and her son, Jake, do a graceful dance as they each attend their post in preparation for the onslaught. The generator whirs into action, ovens are turned on, and pilot lights lit. It’s meltingly hot, and there’s always the potential things could, well, quite literally blow up if something goes wrong.

All that, and an impatient line is already forming outside. Welcome to food truck life. The faint of heart need not apply.

Mathia is part of a new wave of mobile food businesses buoyed by the pandemic. Their social distancing friendly format and comforting, calories-be-damned menus were welcome respite from long days at home over the past two years. And now that many are out exploring the world again, their flexible, mobile offerings are even more in demand.

“It’s been a great symbiotic relationship for all of us,” says Adam Bosch, Parliament’s co-owner. A rotating lineup of trucks, including Lila’s Streetside Eats, Tacos San Juan, and War Pigs BBQ, set up outside his small brewery. “We sell more beer because there’s food. They sell more food because there is beer,” Bosch says. “We didn’t want just the same food trucks, but a rotating lineup on different days so customers could try different types of food.”

While farmers markets and breweries have always been welcoming spots to pull up to, the trucks have also been welcomed at several new food parks in the county, like the Mitote Food Park in Roseland, the Bacchus Landing tasting room collective in Healdsburg, and The Block in Petaluma. There are also burgeoning markets like The Yard in Petaluma and Santa Rosa’s SoCo After Hours. Businesses like Lila’s Streetside Eats are now booked for months in advance with a rotating lineup of requests. “We’ve already got weddings in 2023,” said Mathias, who launched her truck in 2019.

Trucks and tents are a more economically attainable pathway to a brick and mortar for many food entrepreneurs. Pop-up tents like JES Plant-Based, a vegan food business, are the first step.

“I’ve always dreamed of my food truck or brick and mortar for my vegan comfort food. It allows folks without means for a restaurant to put themselves out there and bring their business to people,” says Jes Lyons as she dishes up smoked mushroom sliders with pickled onions and cashew cream on soft buns. Her business is less than a year old, but a combination of social media posts and vegan fans looking for an alternative to meaty tacos and burgers is growing her audience.

Throughout the county, a new generation of Mexican food truck owners follows in the footsteps of traditional taco trucks by making Instagram-worthy dishes with fresh, authentic ingredients that appeal to a broadening audience of eaters.

“It’s what you would eat on the beaches of Mexico,” Mendoza explains. The concept is for “barrio” food that connects the Roseland neighborhood to the Pacific Ocean. Long lines form in front of the truck on hot days, with the bright, clean flavors of Charro Negro’s seafood dishes offering a cool respite under the communal Mitote tent.

This summer, rising prices for gas and raw ingredients, are squeezing owners’ financial margins. “It’s ridiculous. Not only meat costs, but things like mayonnaise and butter. As the cost of food rises, I get disappointed because I want to serve decent food with a cold beer. But I can tailor my menu,” says Lila Mathia. Desserts can be lower in cost to make—and they’re often top sellers, like Mathia’s brown butter chocolate cookie ice cream sandwiches.

Though the work is hardly easy, with three to four days of prep work in a commercial kitchen before spending hot, steamy days inside a truck serving food and long ago almost blowing herself up after accidentally leaving a propane tank on, Mathia says she wouldn’t trade it for the world.

“I wanted to go after a dream,” Mathia says. “It was really challenging, but I love it. I get to be a mad scientist with the food and make people happy.”

The best way by far to track Sonoma’s mobile food truck scene is on Instagram. The new @socofoodtrucks page offers daily updates in one spot.

Buns Only: Jose Cazares’ food truck is a marriage of burgers, hot dogs, and tacos. Perfectly cooked bacon cheeseburgers are among the most satisfying we’ve come across and “dirty fries” with sweet al pastor pork, guacamole, and more. Instagram: @bunsonlysr

Camachos Southern Style BBQ: Big bold, smoky goodness is their motto, and their tender meats are cooked low and slow for 12 hours or more. Ribs are a favorite. facebook.com/CamachosSouthernStyleBBQ

El Charro Negro: Home of the best ocean-to-table tacos and tostadas in Sonoma County. Hands down. No question. Aguachiles, a juicy ceviche made with raw shrimp marinated in lime, are a specialty. Instagram: @charronegrofood

El Roy’s: This family-run Mexican restaurant empire has some of the best Mexican food. They’re usually stationed across the street from the Elenita truck in Roseland or Petaluma. elroysxpressmex.com

Indian Village Eats: A Flamin’ Hot Cheetos burger with macaroni and cheese stuffed inside is just one of the items on the sort of Indian, sort of Mexican menu. Instagram: @indianvillageeats

Jes Plant-Based: From sweets to savory “pulled” mushroom sandwiches and mac and “cheez,” you won’t miss a thing in the meatless, dairy-less deliciousness. jes-plantbased.com

Sushi Shobu: It was a revelation the first time we had a sushi burrito. Run by a former sushi chef, it’s a sustainable, ocean-friendly model of Japanese cuisine. You’ll find his sushi burritos, housemade miso soup and other freshly made items. Instagram: @shoubufoodtruck 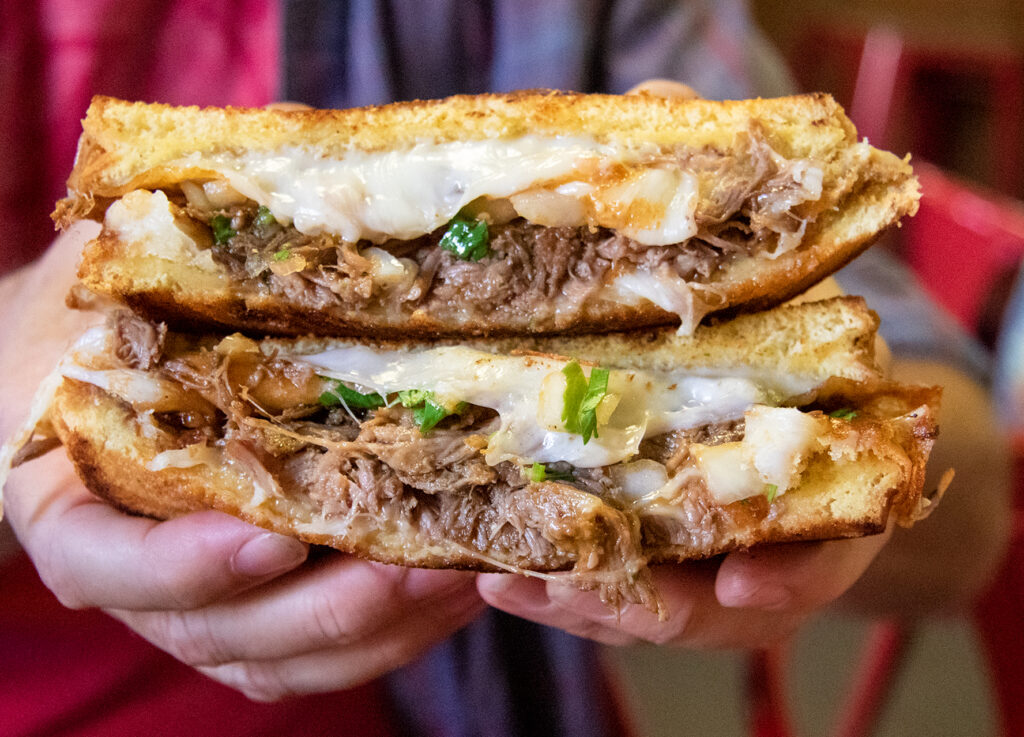 'We Were Destined for This': Local Brothers Expand Popular Taco Truck Business