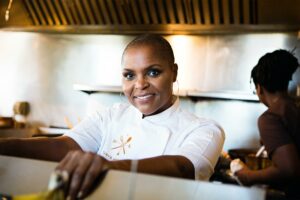 Chef Charlie Palmer has announced plans to develop a culinary-focused 93-room hotel with a 190-seat restaurant and rooftop bar in downtown Petaluma. If approved, the 66,500-square-foot, five-story luxury property would be located at the corner of Petaluma Boulevard South and B Street. The new hotel project is a collaboration between Palmer’s recently-launched hospitality group, Appellation, and EKN Development Group of Newport Beach.

The news comes just months after Appellation announced another ambitious hotel and retail project in Healdsburg with a restaurant and rooftop bar. The company, co-owned by Palmer and Christopher Hunsburger, also has projects in Pacific Grove and Sun Valley.

Calling Petaluma a “foodie destination within a foodie destination,” Palmer’s hospitality group said food demonstrations, artistic presentations and nods to the region’s sustainable farming practices would be part of the visitor experience at the hotel.

“We intentionally designed this hotel to pay homage to the integral role that food and wine play in Petaluma,” said Ebbie Nakhjavani, CEO of EKN Development Group, in a press release.

Palmer, who is a Sonoma County resident and James Beard award-winning chef with 16 restaurants from coast to coast, said that he had been looking for an opportunity in Petaluma for years as “an emerging culinary destination in the region.”

In recent years, the once-sleepy dairy- and egg-producing area has surged onto the world stage with one of the country’s most recent AVAs (American Viticultural Areas), the Petaluma Gap, and has attracted talented chefs, including Stephane Saint Louis and Steven Vargas of Table Culture Provisions, Jevon Martin of Street Social and Roberth Sundell of Stockhome restaurant. Chef Tony Najiola’s Central Market also is a Petaluma food destination.