The retail shop is open for walk-ins 8 a.m. to 5 p.m. Monday through Friday. Visit the website to browse and register for baking classes or to book a tour.

Holiday classes include The Art of Baguette with instructor Craig Ponsford on Nov. 22 and Dec. 19, Thanksgiving Pies on Nov. 26, and Holiday Rolls on Dec. 18.

Instructor Pablo Puluke Giet has his students mesmerized, as he explains kitche techniques — the zipper principle, and the knocking test — and shapes, from the long batard to a round boule. To the uninitiated, it sounds bizarre, but the German-born Giet is a graduate of the Master School of Baking in Munich, and his rapt audience is at the new Artisan Baking Center in Petaluma.

“Yeast needs some oxygen, but just a tiny, tiny bit, like a little near-death experience, because what doesn’t kill them makes them stronger,” he says in his lyrical German accent. “They multiply since they don’t want to be extinguished. But do it right – it’s easy – and your yeast water is ready to rumble.”

There is so much information to absorb, as class runs from 8 a.m. to 4 p.m. — and that’s just a taste of what it takes to be a top-level baker. Students who want to continue their studies can take an intermediate-level sourdough baking class, then the two-day Ultimate Home Baker’s Experience class, followed by the Artisan multi-day series of classes that cater to professionals.

Baking enthusiast Maja Toft has trekked from the East Bay twice for classes recently, and said she plans to attend more. As director of product research and development for Clif Bar & Company in Emeryville, she is around various flours and grains all the time, and loves to bake in her home kitchen, too. She attended a Basic Whole Grain Sourdough Baking class with six of her colleagues, and a pizza-making class with another three colleagues – and not for work.

The retail shop is open for walk-ins 8 a.m. to 5 p.m. Monday through Friday. Visit the website to browse and register for baking classes or to book a tour.

Holiday classes include The Art of Baguette with instructor Craig Ponsford on Nov. 22 and Dec. 19, Thanksgiving Pies on Nov. 26, and Holiday Rolls on Dec. 18.

“Some of us are food scientists, some are not,” she said. “It was just a spontaneous thing for us, to learn more skills and have fun.”

The Artisan Baking Center (or ABC, as its fans call it) is tucked inside the 35,000-square-foot Keith Giusto Bakery Supply/Central Milling Company in an industrial park near McDowell and Corona roads. Open for two years now, its first class was scheduled for the day after the Tubbs fire hit, and it took many months before anyone was thinking about baking breads in ovens heating up to 570 degrees.

When baker Craig Ponsford was hired in May of 2018, there wasn’t much happening with the $1.8 million academy, he said, and he immediately set out to change that.

His official title is bakery coordinator, but his contributions greatly exceed that, as he teaches most of ABC’s highest level classes. Prior to this role, he ran his own bakery, Artisan Bakers in Sonoma, for 17 years and still owns a bakery and innovation center, Ponsford’s Place, in his hometown of San Rafael.

“There are only a handful of real baking schools in the whole country,” he said, including the San Francisco Baking Institute, and the Associate in Baking and Pastry Arts degree programs off ered at the Culinary Institute of America branches in St. Helena, Hyde Park, New York, and San Antonio, Texas. “It’s not so unusual in Europe and Asia and all over the world, but not too many American bakers are actually formally trained.” 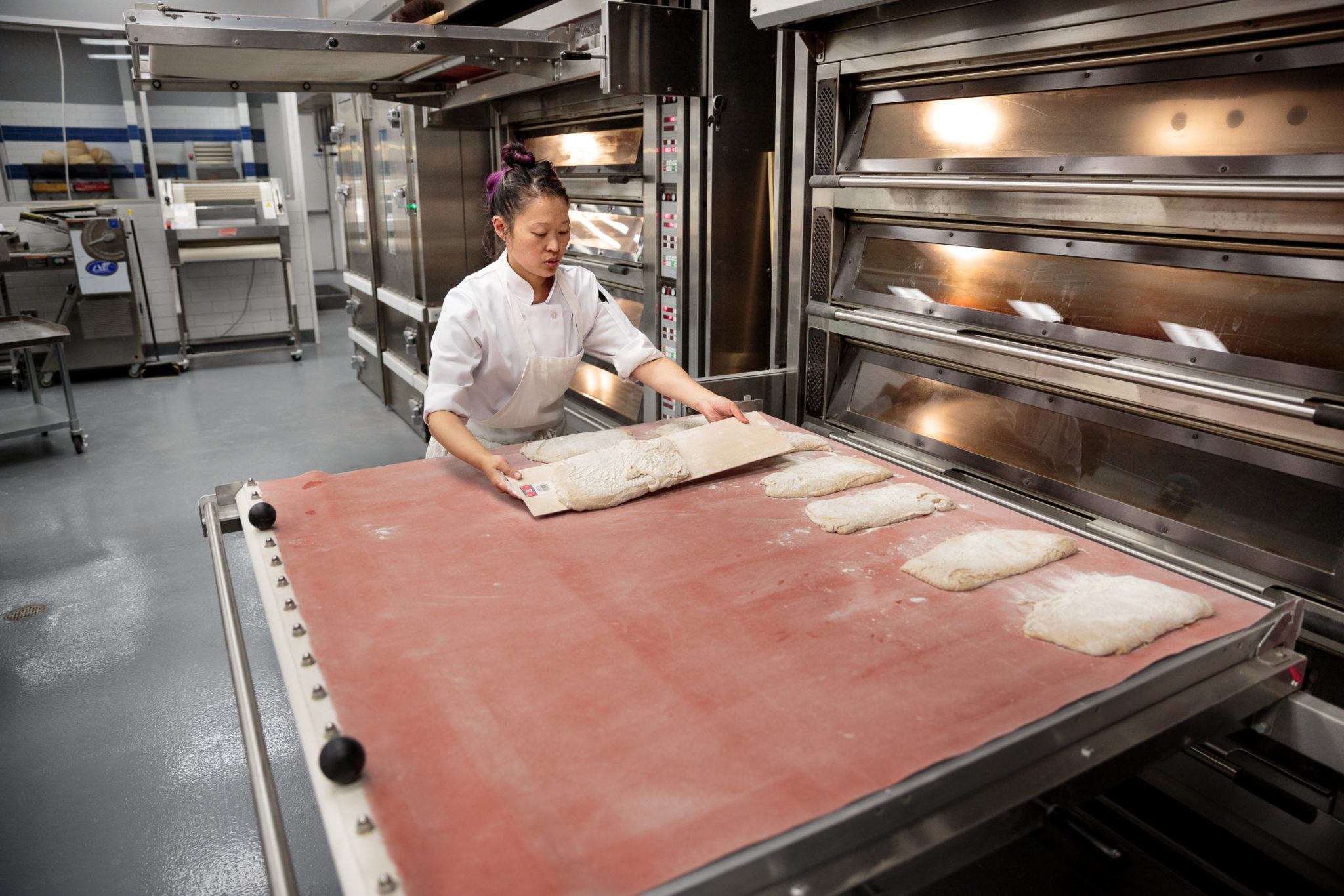 Many local bakers are self-trained, with some supplementary classes, such as Ian Conover and his wife, Tara Williams, who two years ago started their small-batch Relax and Eat Bread bakery and homedelivery service in Sonoma. In 2016, Ian left his career in the cycling industry to go to culinary school at Santa Rosa Junior College.

Then, there’s Rustic Bakery, which Josh Harris and Carol LeValley founded in 2005, after reading cookbooks and baking for family and friends out of their home kitchen. Today, their artisanal fl atbread crackers are sold at shops all around the Bay Area and across more than 550 locations in 43 states.

So it’s perhaps not surprising that these days, ABC is busy hosting about 15 classes a month, with most sold out, and more students traveling from outlying states like Utah.

Seminars can be pricey, at $195 for the basic sourdough class, and $435 for an Artisan III class. But that’s partly because, initially, many students have been bakers running their own businesses, drawn in by ABC’s parent company, Keith Giusto Bakery Supply, which distributes massive amounts of Central Milling artisanal flour and other dry goods like sugar and oats out of its sprawling warehouse next to the baking center. Every seven days, the company turns over a quarter-million pounds of product, with the bestseller being the hard, red whole wheat flour sourced from partner farms across 10 states and milled at its own Utah facilities.

“In many other parts of the world, flour companies have their own bakeries so they can teach their customers how to use their flour,” said Ponsford. “Keith Giusto Bakery Supply delivers to 500 bakeries within 100 miles of here, so a big base for us is continuing education, helping with product development, and team building for customers that are already buying flour.”

Still, ABC is unique in that it caters to customers buying truckloads of flour, but also to home enthusiasts who stop in at the retail shop in front of the school to purchase a 5-pound bag of organic spelt berries, organic pumpernickel rye meal, or organic heirloom einkorn flour made from what’s largely considered the world’s oldest cultivated wheat.

Encouraging more amateur enthusiasts, three-hour classes are available from $90 on single topics like making French baguettes with perfect crumb and crust, just waiting for slathering in artisanal butter and jam. “We’re very busy here, but if you’re a client and want to experiment with recipes, we love to see you,” said Ponsford.

“If someone needs us, our team is here with a couple hundred baking years among us,” said Ponsford. “We try our best to help everybody.”

Indeed, as chef Giet moves his class into another phase, making inoculated water for creating custom yeasts, students start peppering him with questions. He demonstrates how to combine two ripe dates, 50 grams of sugar, and 500 grams of water in a kombucha bottle to create a homemade yeast starter that he promises is superior to, and more consistent than, the traditional sourdough starter of flour and water.

Immediately, students want to know if only dates will work, and he explains, no, as long as the fruit – or even vegetable – has a good surface area and high sugar content, they’re pretty much all good starter material.

“Dried fruit looks small, but put [dried] peaches, for example, in water, and they’re the most amazing things,” he says, as students scribble furiously in their workbooks and examine the ingredients they’re about to prepare. “The next day, there’s a huge peach floating in there. And if you’re making a pizza crust, tomatoes are awesome. They make the pizza even more appealing, since you can say they came from your own garden, and there’s a little extra story.”

Kiwi and pineapple won’t work for starters because they’re too acidic, he tells one student. Papaya, no, because too many enzymes, he answers another. Grapes, yes, as he knows many local bakers who have begun making starters from vineyard grapes (Della Fattoria in Petaluma has long showcased breads made with a natural starter from the owner’s Petaluma ranch-grown grapes).

Then he stops and shares his email address, inviting everyone to reach out if they have questions at home. “I won’t reply,” he says with a laugh, “but you’ll feel better for now.”

Toft said she feels more confident now with her baking, and has made sourdough with the date-yeast water, experimenting with different variables. Her colleagues are exploring new skills, too. “We are all at different levels in baking, and it turned out classes were technical,” she said. “But simple enough that we could all understand what was going on.”

The word about ABC is spreading as bakers of all levels share their finished products in the community, and as the center attracts more and more notable names as guest instructors.

Ponsford is certainly a big deal – among many other honors, he won the first-place gold medal in the 1996 Coupe du Monde de la Boulangerie in Paris for his baguettes, the competition’s first win by an American team.

As ABC’s classes have expanded over the past year and a half, Ponsford said he has found a dedicated base of people who respect exquisite, crunchy-edged, moist crumb breads and are willing to do the hard work to make them. Yes, there’s fun, as well as delicious farm-to-table lunches to be enjoyed during the lengthy classes. But in the end, it’s all about what emerges from the oven.

“Baking is about discipline,” he said. “I have a reputation as being a drill sergeant about time and temperature. I’m having a wonderful time, really, but I’m very, very focused. We can be really relaxed, or super-intense, and it’s worth it.” 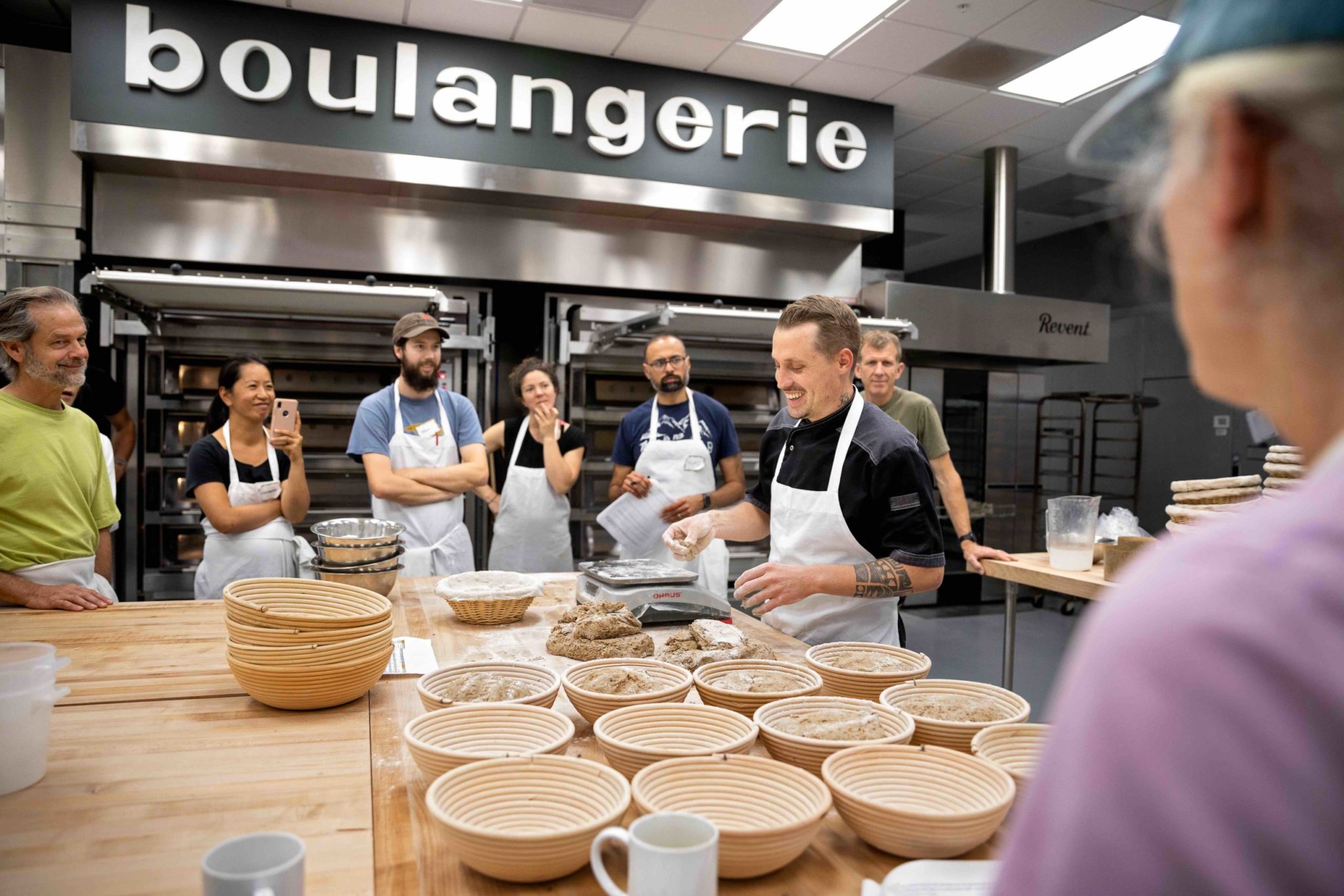 Going to a Holiday Party? Here Are 11 Fun Gifts to Bring to the Host

A bottle of fine Sonoma wine is always a hit with hosts, but why not try something a little different?