Holy knishes! Grossman’s Noshery and Bar, Mark and Terri Stark’s newish “Jew-ish” delicatessen, has finally opened with the full menu we’ve all be kvetching for. With everything from egg creams, latkes and smoked fish to chopped liver, matzoh ball soup and pelmeni, it’s a nosh-mitzvah!

One of the first victims of the shelter-in-place mandate, Grossman’s was slated for a grand opening in late March, ironically the day after the order went into effect. Though the Starks offered takeout on and off with a limited menu, it wasn’t until the first week of June that they could serve their homey, Eastern European-inspired deli menu for both dine-in and takeout.

Over the years, only a handful Jewish delis — Kosher or not — have been part of Sonoma County’s culinary scene. In the 1950s, they included Eisenhood’s, Mac’s Kosher Style and Ben’s Kosher. Only Mac’s stood the test of time, continuing to satisfy our love of pastrami, corned beef sandwiches and hearty rye bread.*

And though a good Reuben has never gone out of fashion, Old World deli staples like beef tongue, chicken liver, whitefish and even matzoh ball soup fell out of favor for healthier, more modern cuisine. In 2015, fewer than 150 Jewish delis remained in the entire country.

Fortunately, a nationwide delicatessen renaissance has sparked renewed interest in comforting, bubbe-style cooking. Grossman’s is all that and a bag of matzoh chips.

There’s plenty of familiar food like hummus, latkes, falafel, egg salad, pastrami sandwiches and a ridiculously good patty melt to love. Break out of your comfort zone and try something new, even if it’s a tasty egg cream (which includes neither egg nor cream) with vodka.

Potato Leek Latkes, $8: These are exactly like my family’s version, minus being limp and greasy. Super-duper crispy cakes, without puddles of oil and with the required sour cream and applesauce. Divine and necessary.

Chopped Liver and Onions, $9: You can’t have a real deli without a lot of chicken, and with a lot of chicken comes a lot of schmaltz and gribenes — chicken fat and skin rendered into golden goodness.

That’s the beauty of beak-to-tail cooking, which also includes chicken livers. Chopped and mixed with caramelized onions and a topping of hard boiled egg and crispy chicken skin, it’s the most heymish dish on the menu.

Veal and Shitake Pelmeni, $11: Can a dumpling be life-changing? Turns out, yes. Pelmeni and tortellini are second cousins, but these little pouches are flavor-filled with seasoned veal and earthy shitakes with a topping of sour cream and fresh dill.

The Sandwiches: It goes without saying that Grossman’s house-made pastrami and corned beef are signatures, served with fresh rye (Grossman’s features its own bakery) and deli mustard. Hence, the Reuben is also insanely good. Here are a few other must-trys.

The Weinberger Patty Melt, $14: I’ve never understood why anyone would eat a cheeseburger when you could have a griddled burger with caramelized onions on good rye bread.

This is the father of all patty melts, with the addition of pastrami, Gruyere cheese (the matured sibling of Swiss) and special sauce. Chef Matt Weinberger, executive chef de cuisine for Grossman’s, has our compliments on this beast of a sando.

Sabich Platter, $21: If you want a sampling of items, the platters — smoked meats, smoked fish or the sabich — are the way to go.

And the rest: We haven’t mentioned the fresh-made bagels, schmears, matzoh ball soup and a laundry list of other tasty treats as well as family-style meals for takeout.

There are also a great cocktail list and full bar and tasty deli pantry items for purchase.

Like any good deli, Grossman’s menu is something you explore over time, not at one sitting. Once the outdoor patio opens in a few weeks, we’ll have even more reason to sit, schmooze and feast.

* Thanks to my Facebook friends, including Gabe Meline, for sussing out some of the history of Jewish delis in Sonoma County. L’chaim! 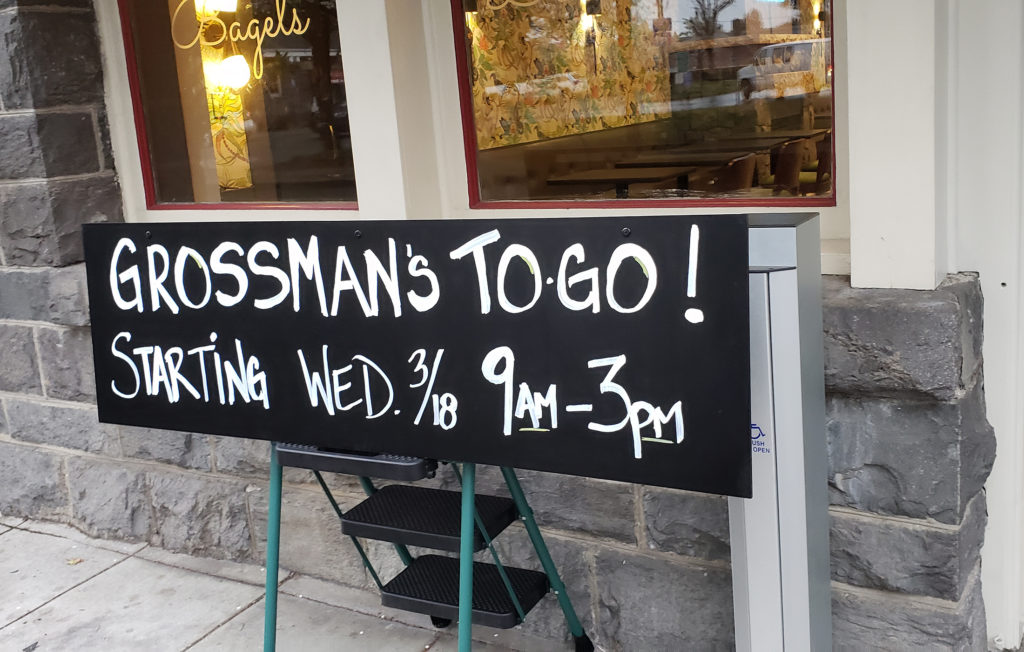 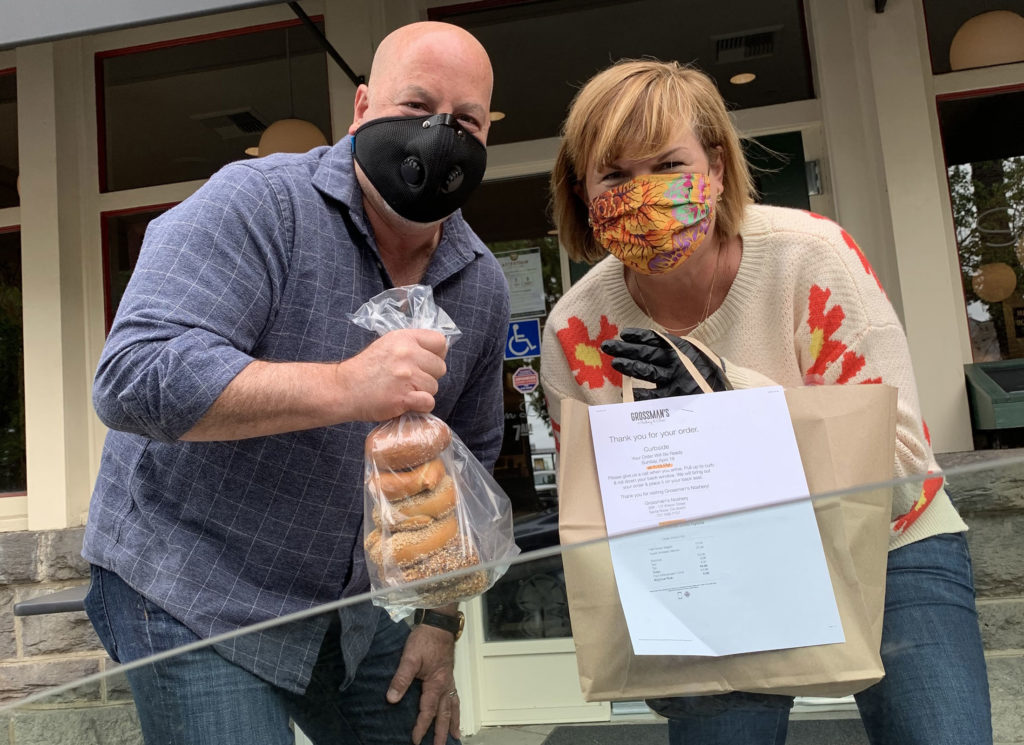 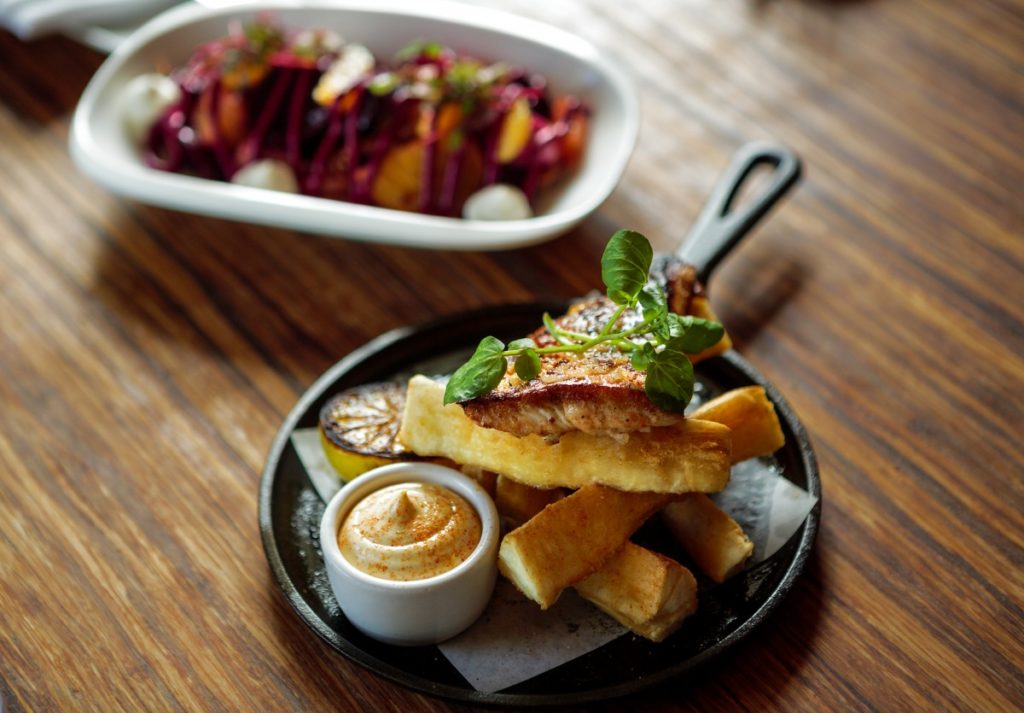 All Stark's Restaurants to Reopen Friday

‘Right Fist in the Air, Strong and Confident’: Black Women in Sonoma County Speak Out

A new initiative, combining photos and personal stories, elevates the voices of Black women and connects them during a momentous,...