From blister-charred brisket and tri-tip to barbacoa tacos from Mexico, Sonoma’s BBQ traditions run wide and deep. Here’s our guide to the county’s top spots. Plus, meet the Mississippi-raised local pitmaster whose pulled pork, ribs, and sides stack up against the very best.

Click through the above gallery for must-try barbecue dishes.

The brisket emerges from the smoker, glistening with a rich cloak of melty fat that peeks out from beneath charred edges. The aroma is mouthwatering, and Santa Rosa pitmaster Kris Austin handles the bundle gently, almost as if cradling a newborn. It’s been nearly 24 hours since Austin handpicked the slab of heritage beef, raised locally by rancher Joe Matos. By now, the brisket’s been slow-smoked some eight hours over oak and almond wood, then rested in a warming cabinet for another 12 hours before being sliced, thickly and generously, for the plate.

All in all, it’s a pilgrimage—and one for the chef, too. Born in Memphis, Tennessee, and raised in rural Abbeville, Mississippi, pitmaster Kris Austin launched Austin’s Southern Smoke BBQ in Santa Rosa in 2020. But he started working around the family BBQ pit when he was just 10 years old.

“Backyard barbecue was one of those things that our family always had around, because that’s how we spent time together,” says Austin. “Thanksgiving and Christmas and Sunday dinners were the only real indoor meals we’d eat.”

Working with a 55-gallon metal barrel they’d cut in half to make a drum grill and smoker, the family soaked up the ritual of the ‘cue. Austin’s grandfather worked as a cattleman, and his father raised hogs and chickens. For larger cuts, they built a 10-foot-by-10-foot smokehouse with an attachment to hold local oak and pecan logs.

But it was that soot-blackened drum smoker that Austin’s family looked forward to gathering around. “We used that thing for years, until the bottom burned out of it,” Austin says. “Then we made a new one and started all over again.”

Often enough, all it took was someone to announce they were hungry for the grandparents to call everyone over to their house for a big, impromptu burger party, with patties plopped on homemade buns that were always in the pantry.

“The only thing we went to the store for was milk, flour, and sugar,” Austin recalls. He caught catfish, and the family grew all their own vegetables. It never occurred to them to sell their fare, no matter how much they cooked. “We just had a big enough family, so that’s what we did for leisure activities. We were always together, and it was always one of those things you could count on.”

All that changed when Austin won a college football scholarship to William Penn University in Iowa. He met his wife on campus—and, lucky for us, she was born in Sonoma County. The couple moved to Sonoma in 2012, and Austin began working as a personal trainer. “I was kind of over the slowness of Southern life, and I was ready for something new,” he says. “I got to travel to a lot of different cities, see the pace and see the people, and broaden my horizons. And I would always eat barbecue everywhere I went.”

He bought his own 55-gallon drum from Walmart, later upgrading to a professional oset smoker, stoking his love of backyard flame between working with fitness clients. One day, a client asked him if he would cater a barbecue party for her 50th birthday. “I was like, ‘I don’t know if I want to put myself on that kind of a scale just yet,’” he says. “She said, ‘It’s not going to be that many of us, maybe 30 or 40 people,’ and talked me into it.”

The client loved his food, and he had a blast.

“It was a hustle and pressure, but I’m a people person, so it was great being around their intimate family, back in that environment with such camaraderie.”

After his personal training work slowed during the pandemic, Austin doubled down on BBQ. He got business guidance from friends, including Peter White of Sugo Trattoria in Petaluma and Maraline Olson of Screamin’ Mimi’s in Sebastopol, and started catering out of his Santa Rosa home. Last summer, he opened a pop-up at Old Possum Brewing, where he built quite a following.

This spring, he left the brewery, taking his growing business to weekly markets in Santa Rosa and Windsor. He’s also planning to teach barbecue classes and cater more events with a new custom trailer set to arrive in the fall.

There’s a real art to shaping the brisket for the smoker, explains Austin. “Aerodynamic, like a bullet. Not too thick, not too thin, to cook very evenly.” He trims the brisket to a quarter-inch of fat, then massages in salt and pepper, so the umami flavor shines.

Coaxing exquisite tenderness, just a gentle hint of smoky flavor, and that perfect pink ring is an all-day aair, as Austin nudges the temperatures up or down, depending on the mix of meats sharing the 8-foot-by-2.5foot G Stacks smoker.

“If I probe the meat and it feels tender, I pull it,” he says. “I read the temperature sometimes, but I can feel and understand texture. I know a lot of people think it’s crazy, but touching it is the old way for a lot of the great pitmasters out there. I’m not scarred up, but roughed up, for sure. It takes a lot of time to build up callouses on your hands so you can feel it without being in excruciating pain—fresh skin and nerves, yeah.”

Finally, he goes home, waking at 6:30 the next day to get his children to school, before returning to work. Then, and only then, is the meat ready to be sliced, cut into slabs, pulled, or chopped.

“Coming into the kitchen on a Saturday, my mother and grandmother would always be cooking dishes to be ready for Sunday dinner, because they always had the notion that the flavors meld and become more powerful,” he explains. “They have time to sit and love on each other.”

He mops a trace of sweat from his forehead, and smiles.

“It’s those traditions I like to keep going—and bring that Southern love to Sonoma County.”

At the Wednesday Night Market in downtown Santa Rosa, the Friday Night Live street fair in Cloverdale, and occasional Thursday farmers markets in Windsor. Plus pop-ups at the Veterans Memorial Building in Santa Rosa on July 15, July 29, and August 26— first come, first served.

More: Chef Vito trained at the Culinary Institute of America in Hyde Park, was friends with James Beard, and worked at top San Francisco restaurants. But his real love is barbecue, so now he dedicates his time to an industrial smoker parked outside his tiny kitchen, stocking it with apple, oak and nut wood and coaxing out meats imbued with a ruby hue and deep smoke flavor. There’s live music most weekends, including Michael B. Serious, a Sebastopol favorite.

More: The roadhouse structure welcomes with a saloon interior and funky, country-charm décor, and the occasional visit by horseback riders or neighboring goats. This is fine-dining barbecue from a chef who crafts his fare with Latin American and African accents. The patio’s various mesquite and oak-fired Argentine grills, and hickory fueled smokers send forth succulent stuff like Duroc heritage breed pulled pork shoulder, pork spare ribs, and a killer hand-ground, 6-ounce, all-natural Angus brisket and chuck patty, towering with shredded iceberg, pickles, smoked and grilled onions, a house cheese blend (American, jack, and cheddar), and crime sauce on a toasted Portuguese bun.

Must Try: The Moo Sandwich, a messy joy with mounds of 14-hour, cherry-wood smoked, barbecue sauce-mopped brisket¤on a toasted French roll with lettuce, onion, and tomato.

More: The Ginochios are Italian, but they are known for their first-rate Texas-style barbecue. The patio’s open roof and big windows allow for spectacular views of marina boats and, occasionally, fish-stealing seals.

Must Try: The Maui Mash of smoked pulled pork and peach barbecue sauce with diced pineapple and pickled onions on a bed of kettle chips.

A Taste Of The Islands–Jaded Toad BBQ & Grill

More: A new Southern Pride smoker was installed this year, turning out tender brined chicken, tri-tip, linguiça sausage, and the signature ribs. Mix it up with housemade sauces, such as tangy-sweet, Memphis smoky-savory, and Cajun hotspicy.

Must Try: “The Whole Fam Damily” combo, loaded with a full rack of St. Louis style ribs, half a chicken, a half-pound homemade hot link, a half-pound Texas link, a half-pound of pulled pork shoulder, and 1 pound combo cut brisket (a mix of lean and gloriously fatty meat), plus your choice of eight sides, including apple-horseradish slaw, spiced sweet potato tots, and Cajun hush puppies.

More: Follow the scent of flamefed California oak and cherry wood to the big barbecue pit out back, then make your way inside for a feast. The smoke-kissed meat comes unadorned—choose from delicious sauces like zingy North Carolina vinegar, gutsy South Carolina mustard, Hellfire, Bourbon Dijon, and Alabama white.

More: Chef Li comes from Beijing, China, and when asked what’s in the housemade meat marinade and sauces, replies, “chiles and a whole lot of things.” These meats are less about subtle smoke, and more about the vibrant seasonings. Big portions (1/3 pound) of brisket, pork shoulder, or St. Louis ribs slathered with a sweet glaze. It all works deliciously.

More: Meats emerge juicy, rimmed in fuchsia-pink after a leisurely time in the Southern Pride smoker, and the cooks work wonders with the fryer and skillets, too. Salads are fresh and filling, including a loaded Caesar, spinach salad topped with paprika-cayenne ribs pulled from the bone, and mixed greens with eggs, cheddar, and fried chicken.

Must Try: The “Porky McPorkeson” pulled pork sandwich, topped with a housemade beef hot link, slightly sweet slaw, and tart pickles on a soft, squishy bun to soak up the tangy sauce.

And some big BBQ news:

Everett and Jones BBQ, a mainstay of Oakland’s barbecue culture since 1973, is opening at Graton Resort & Casino later this summer. It’s the local chain’s first location outside the East Bay—and if you love BBQ like we do, you’re going to want to check it out. eandjbbq.com 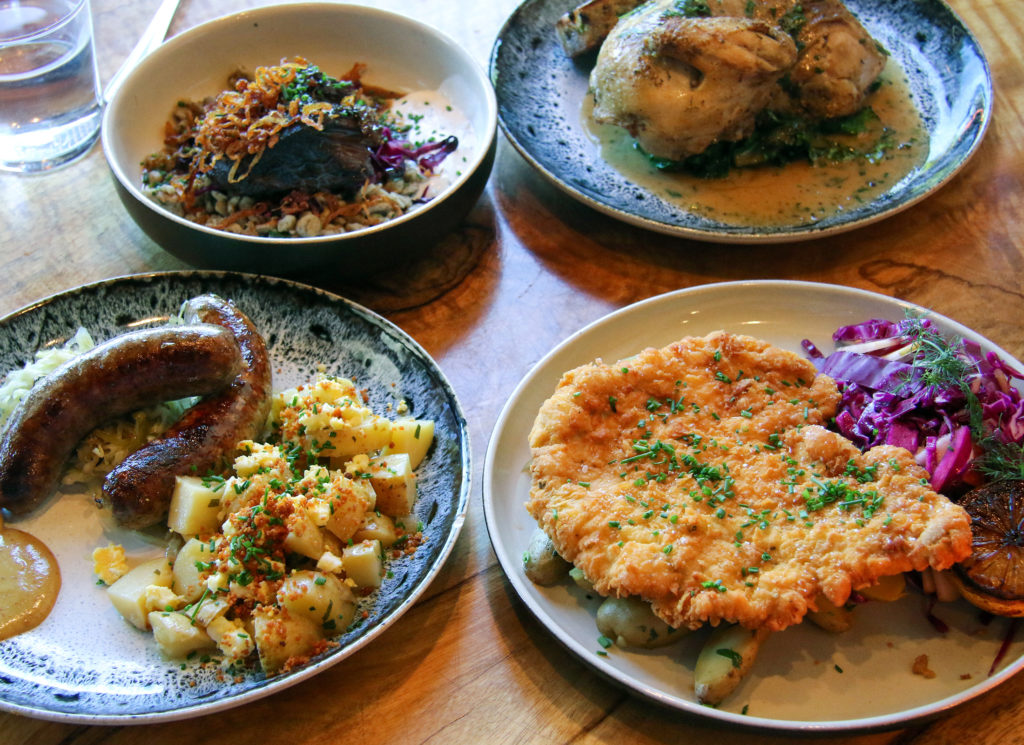 Wine Country is also beer country—with plenty of local brews and outdoor patios to park your caboose and sip an...