Returning to her family’s roots as the owners of a traditional beer hall in Wisconsin, Crista Luedtke German-style bratskellar, Brot, is mix of on-trend design, quirky charm and classic Bavarian dishes.

The name Brot translates to “bread” in German, but for Luedtke it refers to more than just a loaf of rye. It also translates as “livelihood,” something she’s been putting a lot of thought into. As the owner of the Boon Hotel, Boon Eat + Drink, El Barrio (a tequila bar) and a former partner in Big Bottom Market, Luedtke has made it her mission to bring a destination-worthy vitality to the river town.

With new restaurants continuing to pop up along the river, schwanky glamping sites, boutique hotels and shops, Guerneville is gaining the polish that Luedtke has long hoped it would. For that she’s been both lauded and demonized by longtime locals, but never counted out.

Taking over the former 3 Alarm Grill restaurant that closed in 2018, Luedtke has overhauled the interior, adding seating and adding creative touches like a wall of cuckoo clocks and creative paneling to evoke the outline of the Alps. Old German movies play silently in the background and jars of white asparagus pickle in mason jars near the beer taps. It’s cute without feeling overly precious.

The “livelihood” theme carries through to the 20% service charge that allows her to pay the staff a living wage. In these days that offer a limited pool of local staff, surging food costs and horrifying rents for commercial space, many restaurateurs find themselves providing more of a public service than getting rich.

Since opening in late May, the menu has already changed slightly, with a stone fruit salad added to the menu, a few tweaks to ingredients, a few beers added to the menu. But overall, the idea is to stay true to the comfort foods her family has eaten for generations. It’s a welcome addition to the melting pot of cuisines in town, and a testament to the fortitude that Luedtke continues to show in her adopted hometown.

Plus, her mom — who helps in the kitchen — makes some truly legit potato pancakes.

Bavarian Pretzel ($7): A trendy menu item that usually amounts to a microwaved piece of bitter dough slathered in mustard. This gets it right with a bit of snap on the outside, but soft bready goodness inside. Served with butter and mustard for dipping and just enough black salt to season — but not overwhelm.

Flammkuchen ($14): An Alsatian-style flatbread smeared with fromage blanc, red onions, speck (a type of ham) and Emmentaler cheese. A cracker crust and plenty of aromatic cheese make this a perfect pairing for a stein of beer and house pickles.

Potato Pancakes ($9): Everyone has an opinion about potato pancakes. Thick, thin, big, little, shredded or mashed, our tastes bend to familiarity. These thin, uniform patties are crispy at the edges and soft at the center without the greasiness that often weighs down this iconic dish. Sides of thick apple butter and creme fraiche slathered on top elevate these to epic status. With a side of smoked Mount Lassen Trout, they’re even better.

Obatzda ($9): Soft cheese mixed with butter, paprika and onions. It’s beer cheese at its best, and the official Oktoberfest dip, dontcha know. Served with crunchy pretzel chips and a few slices of radish so you can pretend you didn’t just eat a ball of cheese and butter.

Käsespätzle ($9): Spätzle mixed with all the cheese. If you’re new to spätzle, it’s a lot like pasta, but fluffier. Egg batter is poured through a sieve to create tiny dumplings. Mixed with cheese and breadcrumbs, its essentially German mac and cheese.

Fischplatte ($17): Brot has two “boards” — a cured meat “charcuterie” board and a fish board. If you’re a seafood fan, the combination of smoked trout, cured salmon and creamed herring with pickled vegetables is a taste of the old country. Having lived in Germany as a child, the herring awakened a sensory memory of eating pickled fish and sour cream while watching Sesamstrasse (Sesame Street).

Broasted Half Chicken ($24): Though it wasn’t quite what we expected — broasted means different things in different places including fried with some sort of crust — this was the most flavorful roasted chicken we’ve ever had. The meat, through and through, was tender and juicy and flavored with tarragon and other herbs. Served on the bone with wilted greens and a bread dumpling (that frankly seemed a little tacked on). A must-try.

Pork Schnitzel ($22): Too many restaurants are attempting schnitzel when they really shouldn’t. It takes an experienced hand with both the meat and the breading. We tend to be squeamish in the U.S. about using veal, which is the more traditional and more tender meat for schnitzel. Pork unfortunately tends to dry out, though this version, with a grilled lemon and potatoes is laudable.

Sauerbraten ($27): One of the best dishes on the menu. A hunk of braised beef that falls apart faster than a jealous bridesmaid, topped with crispy shallots and pickled cabbage.

Black Forest Pot de Crème: My dad ate all the Luxardo cherries as we shared this dish around the table. Ugh. Rude. Otherwise, a creamy, cool, delicious chocolatey treat.

Stone Fruit Salat ($10): They may have jumped the gun a couple weeks on the stone fruit, since our nectarines were a little crunchy, but the idea of mache greens with herbed quark (similar to cream cheese) and toasted buckwheat, dressed in riesling wine, is the essence of summer.

Red Cabbage Kraut: We like our kraut funky. Cabbage salad is fine, but it isn’t kraut. Sweet-sour, red kraut is one of my favorite things in the universe, and I was sad not to have more of it. Red cabbage salad kept falling off my fork and making me even more sad.

It would be thoughtless to not include the incredible list of German beers on tap. Luedtke has gone to great lengths to have not only the proper glassware, but traditional wheat beers, lagers and pilsners, many of which come from Bavarian brewmasters Schneider Weisse.

German wines are well represented with riesling, Gruner Veltliner, Spatburgunder, Rotburger and bubbles. It’s rare to find German reds, and they’re worth a try. Aromatic whites are a special find. 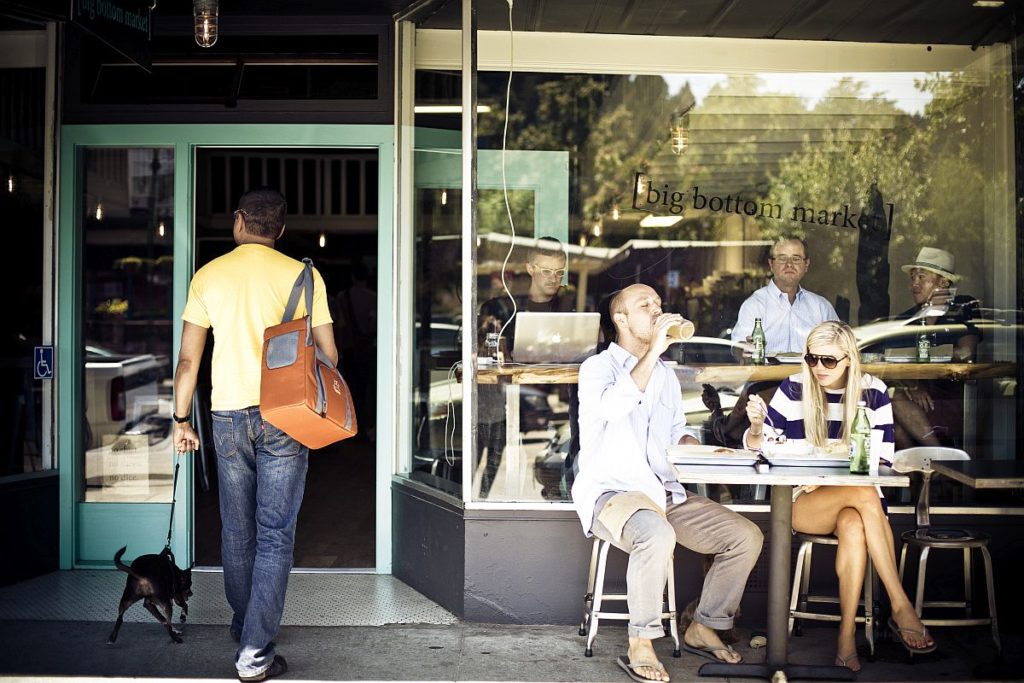 A Day Trip on the Russian River, Inspired by Guerneville's Michael Volpatt

One thought on “Brot Restaurant Brings German Dining to Guerneville”

Vive La France! Where to Celebrate Bastille Day in Sonoma

What better way to celebrate all things French than with fine wine, food, friends and live music? You can do...