As the sun drops toward the dusty horizon on a sweltering August evening in Nevada’s Black Rock Desert, it catches the eye of the coyote. 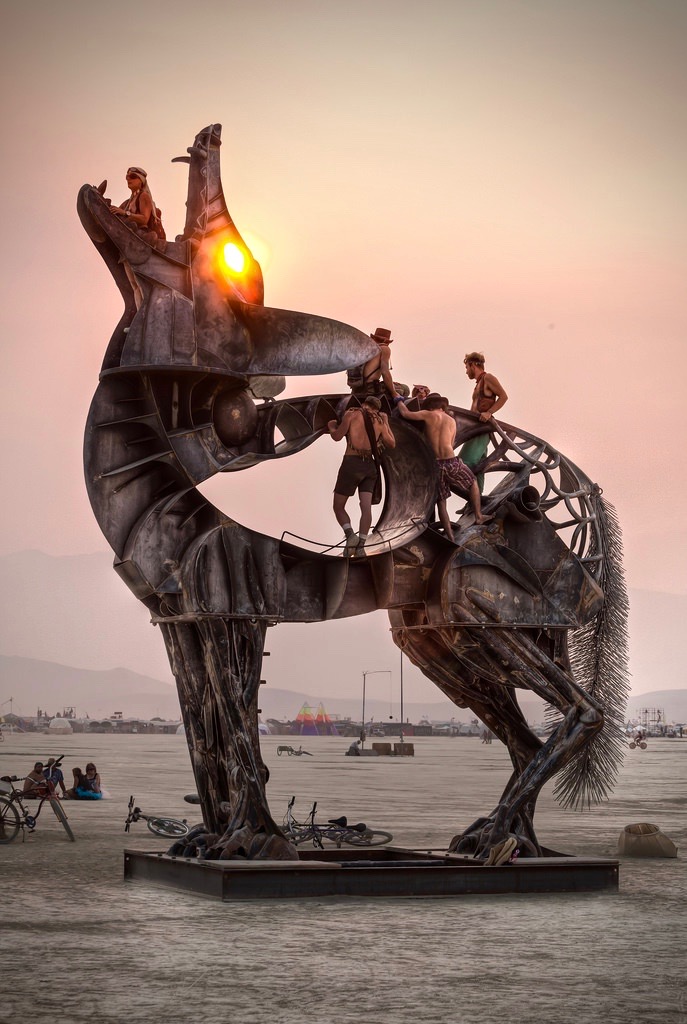 The modern bacchanal of Burning Man is in full swing, and many of its revelers have congregated around a 26-foot-high steel coyote crafted by Glen Ellen artist Bryan Tedrick. The moment when the sun shines directly through the space that defines the coyote’s eye has the feeling of an eclipse: it lasts for just a few moments and seems to cast an otherworldly spell over those who observe it.

The Burners — some climbing on the coyote, one in its upraised jaws — howl. A photographer looking west takes a photo — featured prominently in the pictorial book “Burning Man: Art on Fire” — that becomes one of the defining images of the 2013 festival.

The coyote, forged from seven tons of steel, is just one of Tedrick’s works to grace Burning Man’s desert plateau in northwest Nevada. The weeklong festival, a celebration of alternative art and culture, is the ideal exhibition space for Tedrick’s art, which is far too large to fit in most galleries.

Tedrick, 60, first attended Burning Man in 2005. His initial reaction: “Whoa, there really is a lot going on,” but he wasn’t impressed with much of the art.

“It’s essentially an unjuried show, so anybody can bring anything out there,” he said. “But there were a few pieces that were monumental in scale and really well-done, so I thought, ‘Oh, there are some people out here who are doing good work, and they’re the ones getting grants.’” Submitting a drawing of a pair of wings with a 6-foot-diameter ring in the center, 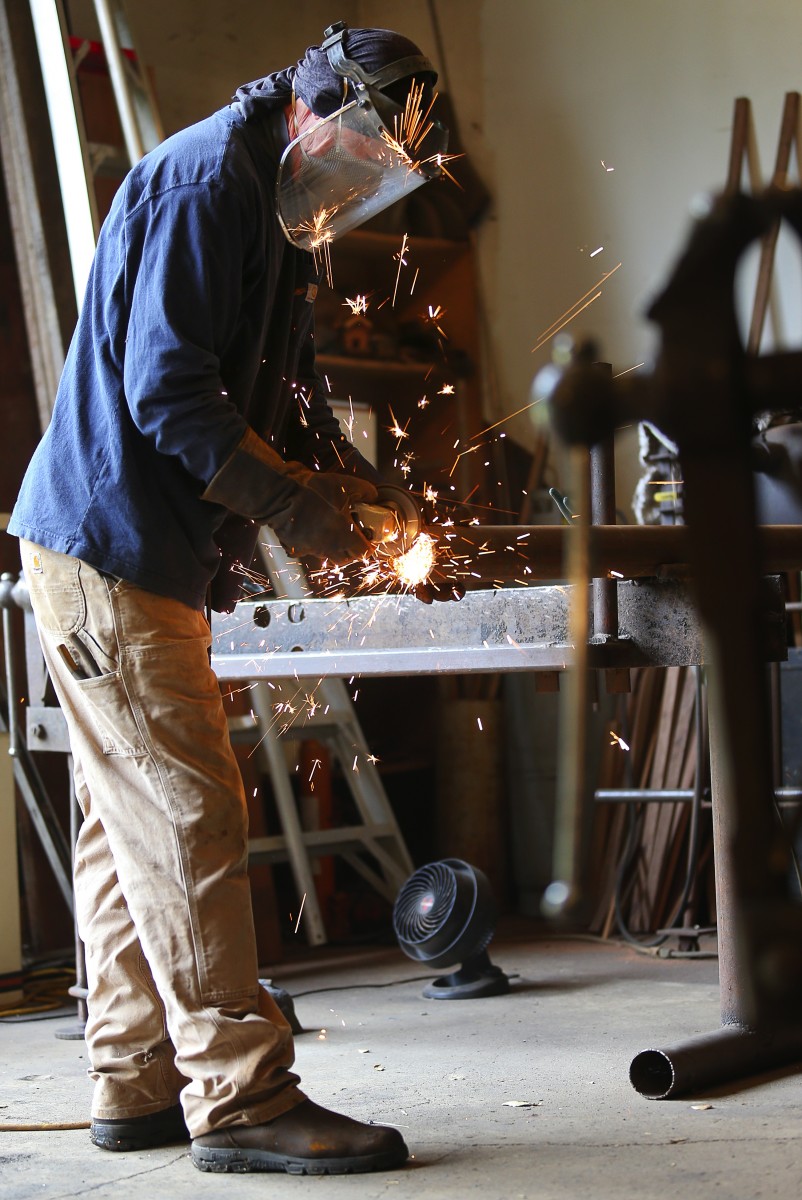 Tedrick applied for a 2008 Burning Man grant. He was the last artist funded that year, he said, receiving $10,000. The sculpture, previously installed next to The Kenwood Restaurant, is now located at the Wine Country Garden Design Center, just south of the Sonoma plaza on Highway 12.

According to Tedrick, grants vary, but $25,000 and under is typical, with the expectation that artists will do additional funding on their own. The 2016 budget for funding art is approximately $1.2 million. If a work is sold, Burning Man collects 10 percent of the sale price, not to exceed the original grant amount.

Tedrick said when he delivered “Spread Eagle” to the playa, festival administrators “looked at me sideways and said, ‘You need to apply every year because we love your work.’” He enjoys fabricating immense works that Burning Man attendees can climb, constructing them in ways that encourage people to become part of the art. With “Spread Eagle,” the ring was just the right size for an adult to stand in, arms outstretched like Leonardo da Vinci’s “Vitruvian Man.” 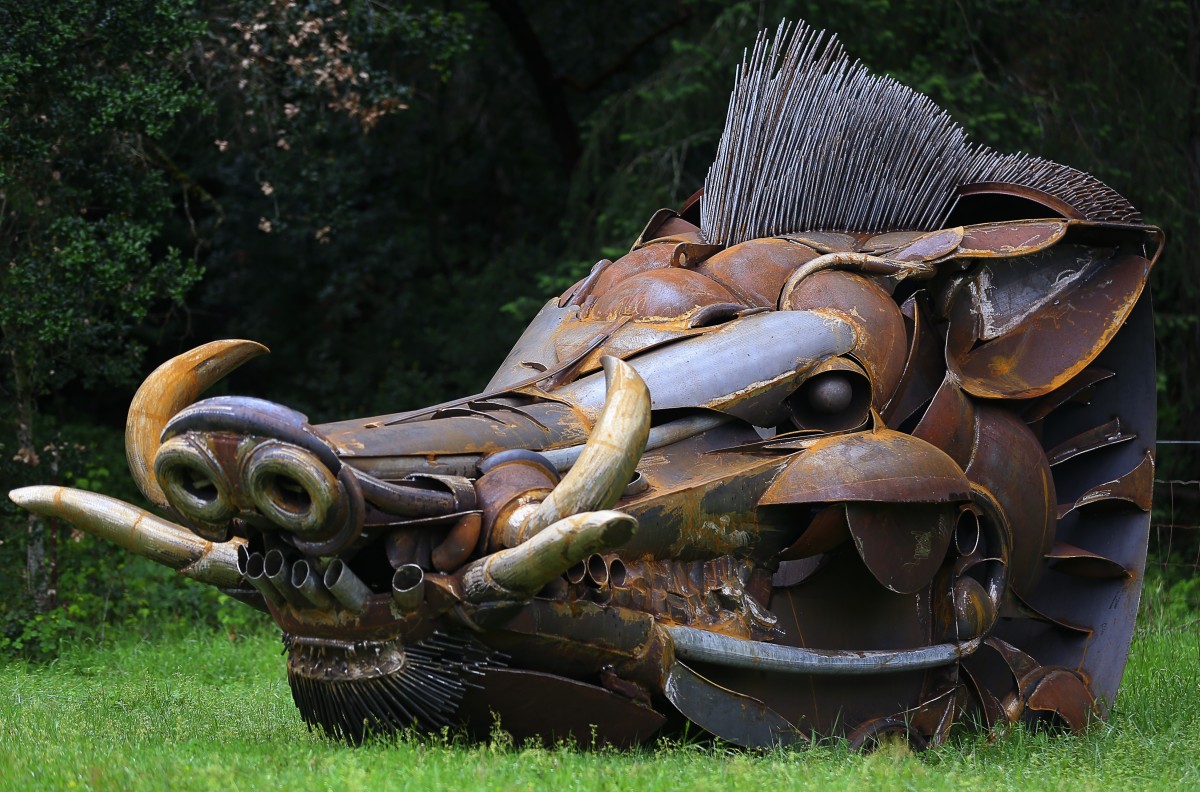 A professor once encouraged him to make larger-than- life art, which inspires a sense of physical danger. “If a piece is shorter than me, it doesn’t have enough power to command my attention,” said the 6-foot-4 Tedrick. “But if it’s bigger than me, then I have to pay attention to it.” 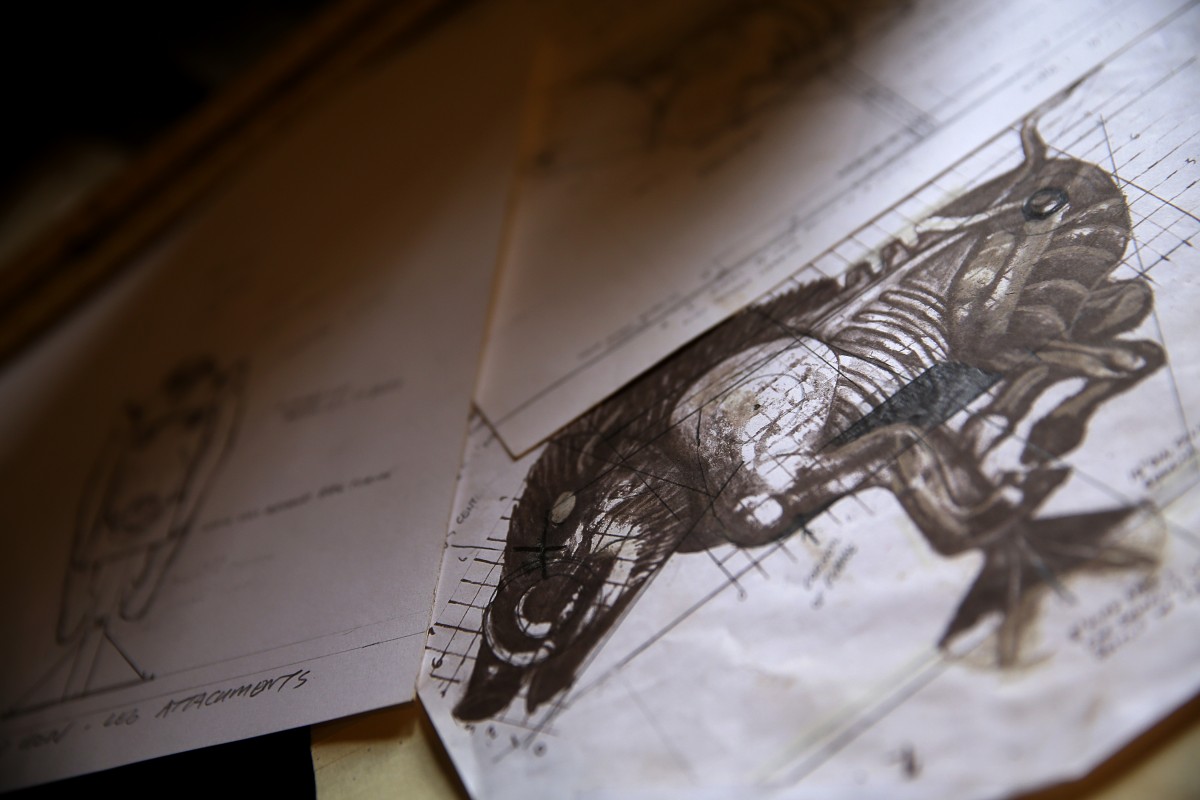 Steel is his main medium. “It’s easy to work with, there’s lots of it around, it’s relatively cheap, very durable, and it lends itself to a spontaneous method of fabrication,” Tedrick explained. He uses a plasma cutter and then welds the pieces together.

He hopes the boar ends up with the coyote’s owner, Ken Wilson of Wilson Artisan Wineries. Wilson bought the coyote after the 2013 Burning Man and installed it at Wilson Winery, on Dry Creek Road in Healdsburg.

“He wants the boar to look super-aggressive and ready to leap onto Highway 12 and wreak havoc,” Tedrick said of “Lord Snout.” If Wilson follows through with the purchase, the boar will be installed at his St. Anne’s Crossing Winery in Kenwood. 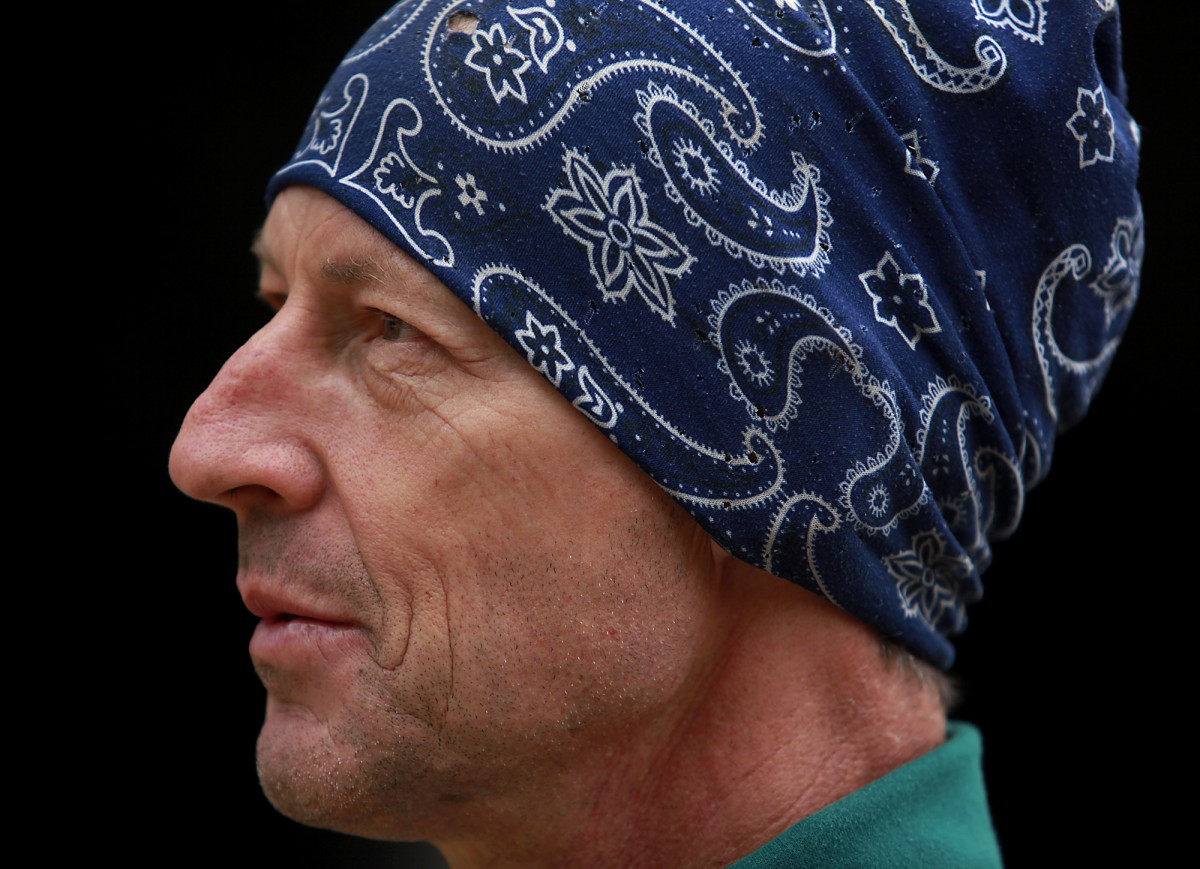 In his late teens, Tedrick worked as a rigger at Kaiser Shipyards in Richmond, but said he always wanted to make art. He attended the San Francisco Art Institute in the early 1980s, where he learned to weld and immersed himself in sculpture. With money saved while working at the shipyard, he purchased land on the coast.

“I had a little cabin in Gualala, so I really didn’t have any responsibilities,” Tedrick recalled. “I had a place to live, so I could afford to live the life of an artist.”

His wife, Terry Roberts, wanted to raise their kids in a less remote area, so they got a place in Glen Ellen, where they remain today. His rented studio is not far from his home, where he imagines and assembles his whimsical creations.

“It does help to have a place where I can be undistracted, so I can focus,” he said. “And it really helps to have a routine.” Tedrick’s credo: Whether you feel inspired or not, show up.

Near the front gate is a horse he made years ago of steel, bronze, rocks and wood. An old facing from a vacuum cleaner is the horse’s rear end, and dark stones form the eyes. The lifelike animal appears to be lunging forward with every muscle.

“The main thing is to avoid straight lines,” Tedrick said. “Straight lines are static and kill the piece. They look really stiff. So everything should have just a slight curve to it. It’s just a matter of being sensitive enough … to adjust those lines until it feels real. Every line has an emotion. There are sad lines and uplifting lines. If you slow way down, you can feel those lines.”

Although he hires a crew to help install his mammoth works at Burning Man, the easygoing Tedrick usually works alone.

“I like the privacy, being able to focus and concentrate,” he said. “I’m definitely into the low-stress life. In Glen Ellen, I feel like I’m in heaven. 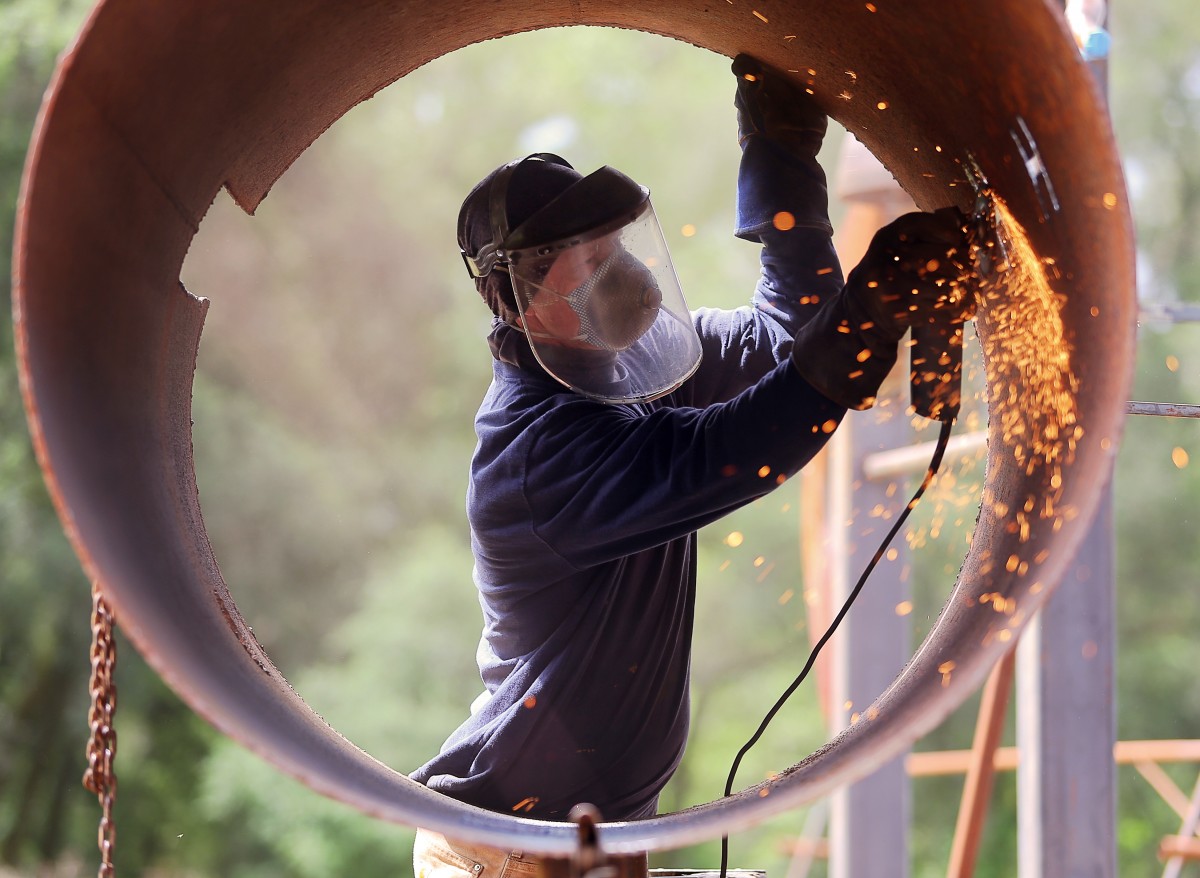