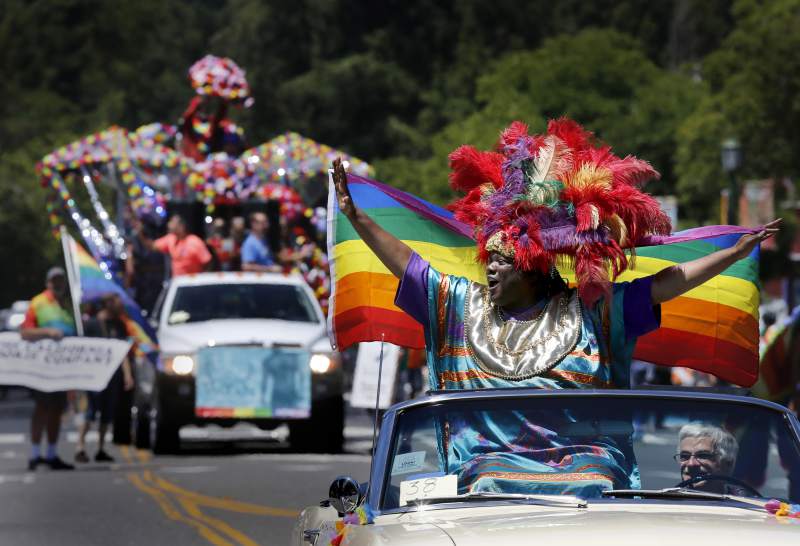 Clad in neon pink sequins and flowers, “Diva D” boasted before hundreds of people in downtown Guerneville Sunday that Sonoma County’s Pride Parade is more successful than it’s ever been.

“This is such a great time because it draws out everyone — it’s not just the gay community, it’s the whole community,” said Goyes, an organizer for the popular event. “I feel like the gay community is not often recognized in Sonoma County, so this is great.”

An estimated 1,500 people were expected to take part over the celebration’s four-day run, which kicked off Thursday with an LGBTQ film festival in Monte Rio.

Sunday’s annual parade drew hundreds of people to the streets of Guerneville. Songs by Prince blared over loud speakers, rainbow flags flew in the entrances of downtown businesses and kids frolicked in the sun-drenched streets as the parade passed the river town’s historic main street.

“This is the best pride parade around,” said Ukiah resident Tony Berno, who regularly visits Guerneville during pride week. “We love coming here. It’s perfect — swimming in the river, walking in the woods and having fun. There’s not too many towns like Guerneville.”

“It has more of a community feel compared to San Francisco’s big pride celebration,” Goyes said. “We love San Francisco — it’s the mothership for the gay community, but this is important in Guerneville to help break down some of the stereotypes out there.”

Similar pride events held around the nation during June commemorate the Stonewall riot that erupted June 28, 1969, after a police raid on a West Village gay bar in New York City. They also provide opportunities for self-affirmation and validation of sexual and gender diversity.

San Francisco was home to another rebellion in favor of LGBTQ rights prior to Stonewall, when in 1966 a group of people rioted at Compton’s Cafeteria in the Tenderloin District. The restaurant at the time was a mingling space for transgender people.

Such monumental events have paved the way for more rights for LGBTQ people, but many still experience discrimination in schools, the workplace and in receiving services such as health care, some parade attendees said.

“It’s really important to let people know we’re still here and to let newcomers know that they’re welcome. And what better a place for this? Guerneville is known as a marvelous mecca for the gay community.” Laine said. “It’s important to have a center even though we’ve been integrated in the community for a long time. It wasn’t always that way.”

For more highlights from 2016 Sonoma County Pride Parade, browse the gallery below.

Auction Napa Valley, host to about 800 people on Saturday, started the afternoon with an array of treats, including Hog...