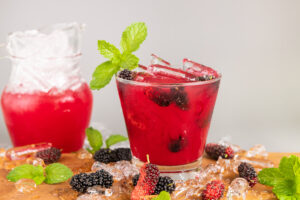 There are as many small, independent food and drink producers in Sonoma County as there are dreams, and that’s a good thing for all of us. Inspired by our plethora of flora and fauna, these artisans are on the road to hitting it big. Or at least making a splash in the local market. Either way, these producers and their products are worth seeking out at local grocers or through online stores.

Clearly there are hundreds of amazing artisans to choose from, but here are a few that have really piqued our interest.

Mama Baretta
Inspired by the delicious Italian cookies of her father’s bakery but concerned about her son’s many allergies, Debra Baretta began a baked goods business focused on gluten-free, non-GMO, organic, allergy-friendly foods her family and friends could eat without a guilty conscience or health problems. She has expanded to include scones, multi-seed breads, cookies, cupcakes and special occasion cakes. Selected products are available at Oliver’s or Pacific markets, and Saturdays at the Santa Rosa Original Certified Farmers Market at the Luther Burbank Center.

rEvolution Bread
Stenciled imprints of a raised fist holding sheafs of wheat are a trademark of baker Eli Colvin’s loaves, as well as a philosophy. Using whole grains including heirloom eiknkorn and emmer wheat, his breads have an old world quality and rustic appeal that foodies love. Find rEvolution breads at the Petaluma East-side farm market, 501 N. McDowell, Petaluma.

Sonomic
This almost-vinegar made by Sonoma Portworks is far less acidic than vinegar, with a sweet, balsamic-like flavor. The idea is to drizzle it over salads or use it for cooking, but we love the idea of splashing a bit atop ice cream or even adding the light Muscat-based “Gold” Sonomic to club soda as a sweet shrub. Available online at sonomaportworks.com.

The Great and Wonderful Sea of Change Trading Company
There are more than 400 types of edible seaweed in the ocean, and this Windsor-based company is hoping you’ll be willing to try at least a few of them — especially if its in chocolate. Cole Meeker, his wife Anastasia Emmons and business partner Courtney Smith are the inventors of Sea Bakin, a salty snack available in flavors like Thai BBQ, maple and garden veggie (seriously addictive) as well as their new line of seaweed chocolate bars made with wild seaweed, dark chocolate and coconut sugar. Available at Community Market and online at seafochangetrading.com.

The Kefiry
Thousands of years ago, the story goes, a shepherd filled his leather water pouch with cool, crisp water from a high mountain stream in the Caucasus Mountains. In the water were grains of kefir, which naturally fermented in the water, creating a beverage rich with good bacteria — what we now call probiotics. At least that’s how the story goes.

Tom Boyd, owner of The Kefiry in Sebastopol ferments and sells his naturally-fermented kefir-water sodas, called Enlivened, along with frozen kefir pops. “We are the first live-cultured soda sold in America,” says Boyd. Like dairy kefir which has been popularized as a health tonic, water kefir is a fermented food that is thought to promote digestion and healthy flora in the digestive system.

Like dairy kefir, which has been popularized as a health tonic, water kefir is a fermented food that is thought to promote digestion and healthy flora in the digestive system. Unlike dairy kefir, water kefir grains are lactose free. But it’s a lot easier just to explain water kefir as naturally fermented soda that contains no alcohol and only a small amount of sugar. Flavors include Holy Basil, Dragon’s Blood (with hibiscus), lemon-ginger and Tulsi Kola (which tastes somewhat like Coke). Available at 972 Gravenstein Hwy South, #120, Sebastopol and on tap at SHED, 25 North St., Healdsburg.

Cocoa Planet
Someone just answered your prayers. Rich, creamy, dark chocolate with “pearls” of flavor (mint, mandarin orange, vanilla espresso, salted caramel, deep dark truffle. Turns out you can get incredible flavor without all the sugar and just 96 calories per disk. This is a Chocolate Revolution! Available at CocoaPlanet Chocolate Factory and Tasting Room in Sonoma, 921 Broadway, Sonoma, CA 95476, and Oliver’s Market, 461 Stony Point Road, Santa Rosa, (707) 284-3530 or at cocoaplanet.com.

Little Apple Treats
Using organic apples from their West County farm, Dan Lehrer and Joanne Krueger have become well-known for their Rose and Cocoa nib caramels, awarded top honors at the prestigious Good Food Awards in 2016. Using a 1906 candy wrapping machine they’ve affectionately named Virgil (who can be very temperamental), Dan and Joanne are part of a new food movement based on simple, honest, handmade food we can all celebrate. Their other products include apple biscotti, apple cider caramels, apple granola and apple cider vinegar. Available online at littleappletreats.com.

Firefly Chocolate
Producer Jonas Ketterle pays homage to the old ways of chocolate-making with his Windsor-based chocolateria Firefly Chocolate. Inspired by the chocolate-making traditions of the Zapotec town of Teotitlan del Valle, Ketterle learned how the locals fire-roasted and hand-peeled the beans “within sight of their sacred mountain,” stone grinding and sweetening the powder with honey. 85% cocao (that’s really dark), the resulting organic chocolate bar is more like a fine wine than a Hershey Kiss. Bitter tannins are mellowed by the perfumed flavors of rose and orange, making this a bar you’ll savor rather than snarf in a single sitting. Available at Sebastopol Farmer’s Market on Sundays 10am-2pm, Community Market in Sebastopol and Santa Rosa, and online fireflychocolate.com

Comet Corn
This mom and pop start up based in Santa Rosa was inspired by an evening around a campfire when owner Sherry Soleski’s partner, Jeff Phillips, served a bowl of seasoned popcorn to some friends while watching the Hale-Bopp Comet whiz by in the night sky. Now the couple hawk their ever-growing lineup of flavors (Bloody Mary, Maple Syrup, the super-popular Hippie Dust, Coconut Curry) at local grocers and, after a stellar Kickstarter that raised more than $20,000, at various Northern California events including the Sonoma County fair, National Heirloom Expo, Kate Wolf Festival and annual Earlefest. Available at Community Market in Sebastopol and Santa Rosa, and at Oliver’s Markets.

The Smoked Olive
When you can count Chefs Tyler Florence, Emeril Lagasse, John Ash, Ming Tsai, and a certain President of the United States among your culinary fan-base, you know you’re onto something. But the owners of The Smoked Olive in Petaluma still say they often have to get people to stop and taste their pungent olive oils before they fully understand — and appreciate — the unique flavor.

Co-owner Al Hartman is the “smoke whisperer”, able to smoke just about anything. Partner Brenda Chatelain explains their unusual smoke-infused extra-virgin olive oil as “a marriage of two primal things: Smoke and oil. It just creates a taste that’s a combination that I think strikes something from our cave days.” Their Whiskey Smoked Brown Sugar is a newer addition, used for meat marinates or baking. Available at Sur La Table, 2323 Magowan Dr., Santa Rosa.

DaVero Olive Oil
Ridgley Evers has some strong opinions about olive oil and is never shy about sharing them. Evers and his wife, chef Colleen McGlynn, are among the handful of olive growers behind Sonoma County’s artisan oil boom. They have made a career out of meticulously understanding the nuances of flavor, balance and timing involved in making exceptional oils that have captured the attention of Chef Mario Batali, among others.

The 4,500 trees on their Dry Creek property trace their heritage from a handful of saplings imported from Lucca, Italy, a Tuscan region with weather much like Sonoma County. Their flagship EVOO has all the qualities of a great California olive oil — fresh grassiness, a mild bitterness and a sneaky pungency. “Three coughs are a compliment,” Evers said with a laugh.

Want to tell us about your favorites? Continue the conversation in the comments section…