A few weeks before the opening of Gerard Nebesky’s new Santa Rosa restaurant, the king of Wine Country paella invited a few industry folks to his Occidental home for a preview of the new menu. Not surprisingly, it included mostly discussions about paella, demonstrations of paella and eating paella. That’s a lot of talk about a traditional Spanish rice dish.

And while that was all fascinating and delicious, the true entertainment of the afternoon — and of his now-opened restaurant, Gerard’s Paella y Tapas — was Nebesky himself.

With a mop top of curly white hair and a grin that rarely leaves his face, Nebesky is the kind of guy who invites you to his longtime camp at Burning Man after knowing you for 15 minutes — and really means it. He routinely dives for abalone and other local seafood for his paella, learned to make paella on a backcountry ski trip and, in 2008, bested Iron Chef Bobby Flay in a paella smackdown in San Francisco. If you’ve ever been to a big Wine Country event, you’ve probably seen him hovered over 4-foot pans of cooking rice and vegetables and shaking hands with pretty much everyone who stops by to say hello.

To say he’s something of a celebrity is putting it mildly, even before he reveals that he’s also tight with former Saturday Night Live cast member Rachel Dratch (he catered her birthday party) and, with more glee than ego, he reveals that actor Jason Schwartzman will portray him in the upcoming Netflix movie ‘Wine Country.’ The Napa-based “dark comedy” directed by Amy Poehler recently wrapped in Napa Valley and stars Tina Fey, Maya Rudolph, Ana Gasteyer and a host of other SNL folks.

“I’m the ‘Annoying Paella Guy,’” he says, holding up a caricature drawing of the cast — with himself in the corner as the Paella Guy. Meanwhile, pans of paella bubble away on his home burners, getting the perfect crispy crunch on the bottom of the pan. Those small paella pans, however, are pipsqueaks compared to the 10-foot pans he’s used at major events like the Maker Faire in New York City.

With the restaurant now open, Nebesky is finding a new audience for his charm and his paella.

Having redesigned the former Persona Pizza in downtown Santa Rosa (also the longtime Arrigoni’s) into a welcoming spot with a cool sunroom, bright and open dining area and open kitchen, the made-to-order paella is as much spectacle as dining.

Just look for Nebesky as both ringleader and greeter behind the giant paella pan, and you’ll know you’ve arrived at the right spot.

The menu is divided into “pintxo” (little bites often eaten with long wooden picks) and tapas (heartier small bites) along with paella, salads, “bocadillos” (baguette sandwiches) and desserts. Lunch and dinner have the same menu. Beverages include several beers and wines on tap (Camlow Cellars rosé of pinot noir is tops) as well as by-the-glass and bottles.

Don’t miss the special cocktails, like the housemade sangria, a lemon and lager shandy and our favorite, white port, tonic and lime, which is the essence of summer in a glass.

Paella Croquettes: Rice and Manchego cheese are mashed into a ball, fried and doused with aioli. What could be better?

Pickled Mushrooms: Not for every palate, but if you like mushrooms and vinegar, these giant pickled fungus are so worth stabbing with a toothpick and savoring again and again.

Papas Bravas ($8): Any tapas spot worth its weight features these fried potatoes. The “Angry Sauce” isn’t so mean as to burn but has a stern bit of pimenton to get your attention. Aioli isn’t just mayo, but a true egg yolk and oil version that tastes like the summer sun of Seville.

Our only critique is the lack of crust on the individual servings. It’s truly our favorite thing about paella, and the quick fires just don’t seem to get the same char. We’ve tried it five times now, and though it’s improving, we want more crunch!

El Pescador ($14): If you get one thing at Gerard’s, get this (assuming you dig shellfish). Filled with clams, mussels, prawns and squid, the beauty of this dish is the “arroz negro”, or black rice, created with cuttlefish ink. It’s a classic, and the ink gives a slightly briny taste to the rice, complementing the fresh seafood.

A few dabs of aioli add richness and a hint of sweet, along with green peas for color and additional sweetness. We kind of can’t get enough of this dish.

Senorita Rosa ($13): The star of this paella is the chorizo Bilbao, made with smoked paprika, garlic and pepper. The chorizo grounds this lighter chicken, arugula and fennel paella, giving it some real muscle.

El Valedon ($15): The #flayslayer, this paella is a mix of seafood and marinated chicken with sweet peppers and garbanzo beans. Think of it as more of a crowd-pleaser with a variety of ingredients rather than a single point of view.

Overall: Half the fun of Gerard’s is the showmanship and stories from Nebesky, well-known to Wine Country for his award-winning paella catering business. But his casual, Spanish cuisine without the fuss is what keeps us coming back again and again. 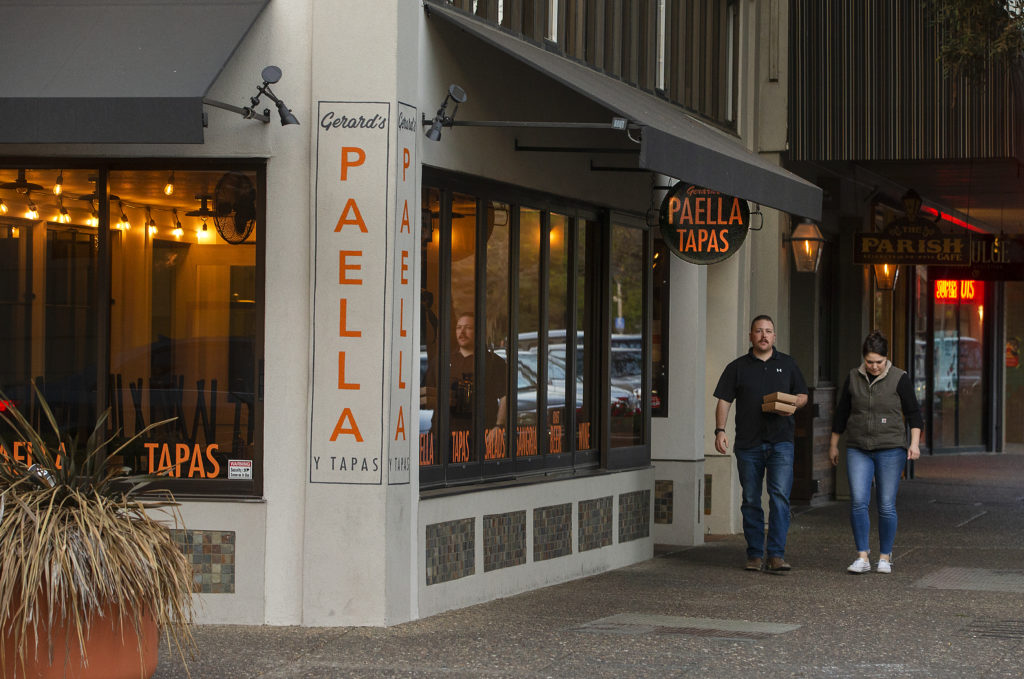 8 thoughts on “Paella So Famous It’s About to Be in an Amy Poehler Movie, Now Available in Santa Rosa”