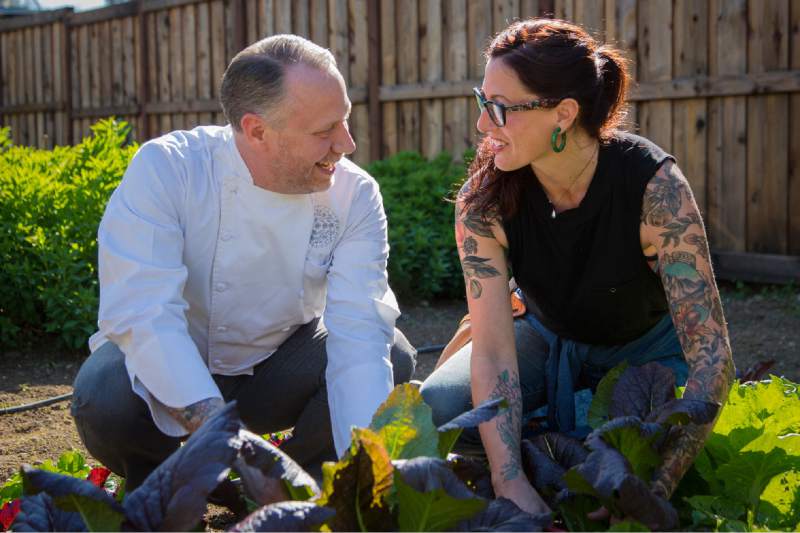 Months before serving a single dish, Chef Kyle Connaughton’s forthcoming Single Thread Farms Restaurant in Healdsburg has been touted as one of the nation’s most important restaurant openings of 2016.

While he and his wife, Katina, have been testing recipes in their home kitchen and sidestepping insulation in the construction zone that will become their restaurant, The Wall Street Journal and national food blog Eater have called them culinary visionaries.

Suffice it to say, the spotlight is rather hot for this Healdsburg couple, even though construction issues delayed their stage debut by more than six months. An early fall opening looks promising as the farm, the menu and the building on a site that once held Healdsburg’s post office begin to take shape.

On a warm spring afternoon, the 40-year-old chef waves out the open window of his soon-to-be restaurant at his daughter as she walks past on her way to music class. She waves back like any mortified teenager. Stepping over wires and construction debris, he continues a tour of the two-story structure that will house both the restaurant and a five-room boutique hotel while sawdust floats through the air.

It still takes a bit of imagination, but there’s no doubt the couple has envisioned every detail, every finish, every tile, every aspect of the intimate Wine Country dining experience he and his wife Katina have been nurturing for years, leaving nothing to chance. Within a month or so, the space will surely come together with the precision of an atomic clock.

Though in public he’s quietly reflective and not prone to chest-beating, Connaughton is no rookie in the high-pressure, review-driven world of haute dining. His resume includes some of the most important restaurants in the world — Spago, three-Michelin starred restaurant Michel Bras in Hokkaido, Japan, and in the U.K., Heston Blumenthal’s Fat Duck Restaurant, which was named “Best Restaurant in the World” during his tenure there.

He’s also co-founder of the culinary research group Pilot R&D, a pioneering company focused on food science, and he has recently finished a book on cooking with donabe, ancient Japanese clay cooking pots. He is, in a nutshell, a Very Big Deal.And that’s why the national food media are chomping at the bit to talk about Single Thread Farms, a restaurant right in our own backyard. We visited the couple to see how things were shaping up for the fall opening, with the clock ticking. Here’s what you need to know and what’s on the way.

The 52-seat restaurant defies simple labels like “farm-to-table” or “Japanese” or “Wine Country” or “modernist,” though it will encompass all of those things. Instead, the menu will be a reflection of the Connaughtons’ life experiences, his in restaurants and hers as a farmer in Japan and Sonoma County.

Connaughton describes it simply as “omotenashi,” or the Japanese art of heightened hospitality and anticipation of a guest’s every need.

The multi-course dinners will include options for omnivores, vegetarians and pescatarians. To further personalize the experience, diners will be able to note allergies and intolerances when tickets for the meals are purchased in advance. That means each party may have slightly different menus customized for their tastes.Expect the cost of this meal to be about $295 per person (including tax and service charge), with an additional $155 or $295 for wine pairings, depending on which level you choose.

Just a few blocks from the restaurant, the couple’s Healdsburg home has been a staging site for months. Chef de cuisine Aaron Koseba and pastry chef Matthew Siciliano nosh away at the long dining table, testing recipes with Connaughton in the small but well-appointed kitchen.

A built-in cabinet holds more than a dozen donabe that have been made specially for Connaughton. In the basement, hundreds of boxes hold lacquered wooden serving dishes, clay platters and specially-made Japanese knives he has ordered.

A mockup of the menu has just arrived. After many iterations, it’s finally perfect, with lavish paper, the restaurant’s onion flower logo, an envelope of seeds from Katina’s farm, and a personal thank you from the couple. It’s wrapped in tissue and presented in a box at the end of the meal for a keepsake.

Katina’s 5-acre Single Thread Farm is tucked away in Alexander Valley, carved out of fallow land on winemaker Pete Seghesio’s San Lorenzo vineyard property that took months just to prepare for planting. Visitors travel past a flock of laying hens and green grapevines before they spot her blazing hot greenhouse and carefully plowed rows.

This is Katina’s domain, where early tomatoes hang heavy on the vine and later summer crops are just being planted. There’s a brand new beehive and green-housed rows of herbs, but in late May, things are just starting to take root.

This is the heart of the restaurant, where the seasons, the microclimates and the terroir will drive everything that is served in the restaurant. It’s all hands on deck, with family members, chefs and anyone else who can handle a shovel, a set of clippers or a bale of hay pressed into service.

Taking cues from time spent farming in Japan, Katina espouses a micro-seasonal philosophy that breaks the calendar into 72 five-day farming cycles, with each crop having a tiny window of “perfection.” That means the peach, or asparagus, or pea you eat at Single Thread won’t just be seasonal, it will be at its very apex of perfection. Think of that juicy red tomato bursting on your tongue, still warm from the garden in late August, and you’ll get the kind of moment-in-time flavors the Connaughtons are after.

A tangled orchard borders the farm, with fruit and olive trees Katina hopes to rehabilitate. This isn’t gentleman farming, but hard, sweaty, dirt-in-your-fingernails work that has helped Katina get an intimate feel for what will grow there, and how to best utilize the space.

On the rooftop deck of the restaurant, planters also will have fruit trees and herbs to further expand Kyle’s culinary repertoire.

Culinary firm AvroKO is behind the restaurant’s design. The New York-based firm also designed what is now Ninebark in Napa and has been responsible for a number of high-profile restaurant designs in San Francisco, New York, Las Vegas and Hong Kong. Expect lots of fine details, including signature brass accents and tiles, and a minimalist look that echoes Connaughton’s culinary style.

The Connaughtons were high school sweethearts and have spent more than 20 years traveling the world, planning for a restaurant like Single Thread someday. They moved to Sonoma County from the U.K. in 2011, and say they felt at home almost instantly. The location seemed like a good fit for the restaurant they envisioned as a guest experience that’s an extension of their family rather than a rigid, uptight encounter.

Single Thread Farms is not yet taking reservations, but more information will be available at singlethreadfarms.com as the opening approaches.