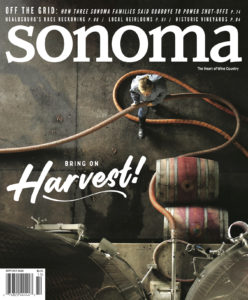 It’s time for Greg and Lindsay Hamilton to enjoy the rocking chairs on their new front porch. After all, it’s been an intense three years for the Kenwood family, who lost their home in the early hours of the 2017 wildfires and have moved four times over the course of the rebuild, which they managed themselves while working full-time and raising two young children. Not to mention their many home projects and the wine label they launched as a side business. So yes, some time spent relaxing on their porch, overlooking their small vineyard, is entirely warranted.

“As we look back ten years from now on the things the fire took from us, I think the one thing we will regret is it kind of took us away from our kids,” says Greg. “But Covid has forced us to think, ‘How do we slow down?’”

Greg and Lindsay, who work from home for the same tech company, and their two kids Alba, 7, and Abhainn, 5, moved to Kenwood from Berkeley in 2016. Greg, who grew up in Scotland, met Lindsay, a native Californian, in a Glasgow pub while Lindsay was still in college, and the two married young. “I grew up in a very average suburb, with the differentiator that across the street from us was the moors— thousands of acres of open space at our disposal,” says Greg. They moved to Sonoma to give their kids that same rambling, outdoorsy childhood. “We basically ate outside every single meal for the first six months here,” laughs Lindsay.

In their new small-town life, they quickly found others who shared their family values. “The day of the fires was the Glen Ellen Village Fair,” remembers Lindsay. “We ran into all these friends there, and I was thinking, ‘We have a community. We have friends; we really know people here now.’”

Just a few hours after getting home from the fair, they looked out the window to see a huge wall of fire blowing across Adobe Canyon Road just a few hundred yards away. They quickly grabbed a few things, got the kids out of their toddler beds, then drove to a neighbor’s house to wake them up. The next morning, those same neighbors sent Lindsay and Greg a video of what remained of their property. The house and a historic water tower were gone, along with several old trees and some vines. A barn and small carriage house remained. “It was awful, but at the same time, the video was the perfect thing because we were able to just start grieving and start processing right away. So many people were in that unknown for so long, which I think has to be worse,” says Lindsay.

Friends and colleagues rallied around the family, even making a spreadsheet to organize donations of furniture and household goods. And a fellow parent at their kids’ nursery school in Sonoma, an architect named Steven Moseley, stepped forward to donate his time to design their new house. They met early on to talk over design priorities, and when they met again a week later to review the architect’s initial ideas, they realized that what he had sketched was the exact house Lindsay and Greg had roughed out in their minds. “It was amazing,” says Lindsay.

“At first, we were like ‘That’s too easy, how do we know this is the one?’ So he came up with two other ideas, and we were like ‘Nope, this is it!’”

Their former home had been a two-story brick Colonial. But the new home Moseley designed has a traditional farmhouse look, sitting lightly on the land next to the carriage house and barn. A large great room with a sliding glass wall out to the deck connects to the open kitchen, which has a pass-through window to an outside bar table. “The thing that we love about the farmhouse is that it’s timeless,” says Greg. “And the finishes are timeless, like the subway tile. It doesn’t look bad in houses from a hundred years ago, and it won’t look bad in this house a hundred years from now.”

Important, too, was the sustainability of the rebuild, especially to Lindsay who studied environmental science at UC Santa Cruz. They participated in PG& E’s Advanced Energy Rebuild program, which offered partial rebates for meeting energy efficiency standards with appliances and windows, extra-thick insulation, and solar panels.

It’s an easy-living home, one where the sliding window wall in the living room often remains open all day while Alba and Abhainn build massive pillow forts or have ice cream at the bar table at the passthrough. Greg can pull the kids into a late afternoon pizza project, helping them roll out dough on the kitchen island, then baking the pizzas on the grill out back. “We went in on a third of a cow with some friends, so we’ve also been eating a lot of steak.

And one of the things we want to do a lot more of together is baking,” says Greg. “We love to watch The Great British Baking Show, so lots of lemon bars and brownies, and I love pies.”

Though they’re longing to slow down, September and October will also be busy this year with harvest.

In Berkeley, they were enthusiastic home winemakers, and when they moved to Kenwood, they hoped it would be in the cards someday to launch a small family wine label. “But then after the fires, Lindsay and I were sitting there one night, and we were were just like, ‘what are we waiting for?’” explains Greg. While still settling into a temporary rental, they met with a consulting winemaker, who has helped them source grapes and find a custom crush facility in Sonoma. In the future, the couple hopes to create a small tasting room in the barn to share their wines. Says Greg: “Life can throw you a curve ball at any time, so sometimes you just have to jump in with both feet, even if you don’t know where the bottom is.”

With the rush of harvest, it might be a few more weeks until there’s time to take up those rocking chairs on the front porch in earnest. But Greg and Lindsay are holding a long view, reveling in building their new life after three years of unsettledness—and thinking a lot about the concept of home. They remain reflective about what their family has been through. “It would be easy to get too caught up in the idea of ‘If only I had a perfect home, my life would be perfect.’ I think it’s a lot more complicated than that,” Greg acknowledges. “But I do feel like there is something in being able to create your own home. It’s an incredible gift. And I think we do see that future now.”

Give yourself a break and order from one of these restaurants. There are even a few dine-in (which means outside)...