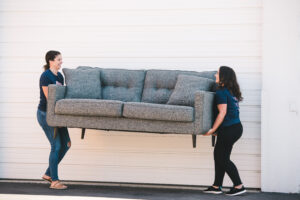 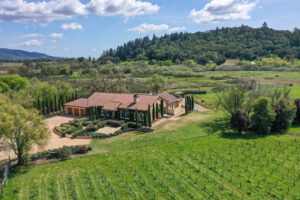 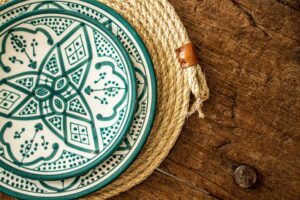 The exterior of Ben Dhong’s house doesn’t look much different from the others on his Healdsburg block, where homes are wedged tightly along a ribbon of sidewalk. But inside, this plain 1980s tract home wears an unexpected glamour. Those who walk through the door forget they’re in a subdivision.

“It was just a box. An ordinary, boring box,” Dhong said of the three-bedroom house, located not far from Healdsburg High School. It was built in 1981 with the prominent “garage door” architecture of the era.

Dhong is an interior designer who deftly blends traditional and contemporary elements for looks that withstand the vagaries of time and trends.

With his own home, he pulled off a neat trick on a modest budget, making small changes with big visual dividends, using paint, wood, wallpaper and mirrors. Most of the furnishings are off-the-shelf finds from West Elm, Ikea, Cost Plus, even Marshall’s and T.J. Maxx.

“Everyone can live in a beautiful home whether you’re rich or poor,” he said.

Although his clients tend toward the privileged class, Dhong is proud to say he’s not a “design snob” who insists on custom everything.

“I’ve had some wealthy clients who lived in big, sterile, cold homes. Tacky homes. And I’ve known local people who went to flea markets and have enchanting little cottages,” he said.

Dhong calls the house “Cloud Walk” because of its airiness and heavenly cream, linen, eggshell and gray color scheme. “It has an ethereal, dreamy quality to it. You float through it. There’s no dramatic shift from one room to the next.”

A giant Wade Hoefer painting of puffy clouds above a bare slip of landscape consumes a prominent wall in the dining room. An ICBM missile mold Dhong found at a San Francisco antique store appears poised to blast off into the clouds from the center of his dining room table.

Above the contemporary fireplace is a cloud panel that only looks expensive. Dhong made it by creating a pattern and cutting it out of a piece of plywood he then covered with leftover wallpaper that had a dramatic cloud design.

Dhong lives and works much of the week in a studio in Berkeley, though he spends long weekends in Healdsburg, where he was a close pal of the late interior designer Myra Hoefer. She encouraged him to buy the 1,700-square-foot house as an atelier and retreat.

“I didn’t necessarily want to buy a house that’s in a development,” Dhong said. “But when I closed the gate — and it’s a very nice development and very quiet — I never heard or saw another person. It just shows you don’t have to buy a big estate to live nicely. You don’t have to have the most expensive things. You just have to have a little creativity and put a little thought into it.”

Most of Dhong’s furnishings and improvements were made within the budget of the average homeowner. He sheathed a single wall here and there with wide, rough boards he found for next to nothing at lumberyards, and painted them in light tones. These accent walls dress up an otherwise boxy room with what Dhong calls “instant architecture.”

Dhong made the most dramatic changes in the kitchen. Before, it was like a long dark tunnel with a bit of light at either end. Working with architect Matthew MacCaul Turner, Dhong opened up the ceiling to the gabled roof, added 12-inch whitewashed planks, popped in a porthole and inserted skylights.

A breakfast nook, kitchen and dining room were incorporated into the only large open area. The focal point is an antique apothecary cabinet that consumes a good portion of a kitchen wall. Even after it was cut down to fit the space, it stands a stately 10 feet tall, offering ample storage on beautiful open shelves, at less cost than conventional kitchen cabinetry.

Among the signature elements Dhong added is a little Scandinavian-style sleeping nook cut into a closet of the breakfast nook. On full-moon nights, he sleeps there and looks up through the skylights.

At the top of the stairs, he removed the doors of a linen closet and turned it into a grand recessed entry point. Above a Chinese lacquered table with elephant feet is a plaster profile of a Swedish king.

Even the backyard is a trick. Dhong figured out that the view through his back windows is of a nice archway along the driveway to a church above his house. From certain points through the window, it appears that the open space is part of his own estate.

He calls it “stealing the view.”

New Brews on the Block: 7 Local Taprooms to Check Out

Blink and you’ll miss it: another craft-beer taproom opening in Sonoma County.