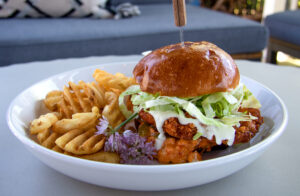 Information: 707-273-1155, zamzamhalalfood.business.site. Available on DoorDash and other food delivery apps.

The impromptu eatery is called ZamZam, a reference to a life-giving, sacred well in Mecca that is treasured in Islamic culture.

This is the humble font from which Dawood, 20, is beginning his American life, light years from his former career as a national soccer player in Afghanistan.

Dawood is one more than 100,000 refugees who fled the war-torn country during the chaos surrounding the U.S. military’s departure and the Taliban’s swift return to power last year. In a harrowing escape, he left Afghanistan with three brothers and their mother. The group are now are now temporarily settled in Santa Rosa with a fifth brother, Roman Zemari, who is a U.S. citizen.

Zemari recalls the anguish-filled days watching from afar and unable to help as his family struggled to depart the country.

Information: 707-273-1155, zamzamhalalfood.business.site. Available on DoorDash and other food delivery apps.

The emotional story begins with his mother, Zakia Sayed Osman, visiting family in Afghanistan last year. As the political situation quickly began deteriorating, Zemari begged her to leave the country with her four Afghan sons (including Suliman), daughter and two grandchildren.

Because Osman has a green card, the family were granted humanitarian asylum in the U.S., and the path out seemed assured. But while they made their way through the terrified crowds at the Kabul airport, one son, 19-year-old Ibrahim, was struck by Taliban soldiers. Gunfire erupted as the family continued on, but Osman’s daughter and two grandchildren were forced to turn back. They remain trapped in Afghanistan.

“There was shooting happening, and my mom got on the plane with my little brothers,” Zemari explained. Dawood and Ibrahim, along with the two younger siblings, 12 and 16, now have temporary humanitarian asylum here.

Adapting to a new culture

As Dawood and his brothers settled into their new Santa Rosa home, one of the challenges was finding familiar cuisine.

“We struggled finding food for us (in Sonoma County),” said Dawood, whose family eats halal, as do many other Muslim families in the area.

Halal means “permissible” in Arabic. It requires that the slaughter of animals for food adheres to strict Islamic standards. Like kosher food, overseen by Jewish law, halal also prohibits the consumption of pork or other “unclean” animals. Conventionally raised meat is not considered halal.

So without many local options for halal food, the family started a restaurant.

Operating out of Harry’s Market in a scruffy west-end neighborhood of Santa Rosa, ZamZam is the humblest of eateries, lacking tables and chairs and only available for takeout or delivery through apps like DoorDash. Surrounded by industrial businesses and low-income housing, the market attracts families seeking sodas and candy along with less savory characters who loll drunkenly nearby.

That element, Dawood said, frightens away the very demographic — Muslim families looking for halal meat — he hopes to serve.

“Families don’t like that we are in a liquor store,” he said. Intoxicating substances (including liquor) are forbidden in Muslim culture. “But we tell them if they don’t feel comfortable, we can come out with the food. We would love to have a place where people can come to sit and eat, and we hope to one day have that, in a Turkish style with sofas.”

Though the menu is limited to combo plates with spiced chicken, ground lamb, gyros, chicken wings and American dishes like hamburgers and pizza, all of the food is halal.

ZamZam soon will be taking American dishes off the menu and replacing them with bolani (an Afghan bread filled with potatoes and leeks) and Afghan “burgers,” a lavash flatbread filled with fries, a hot dog, boiled eggs and chutney. Desserts like baklava are housemade and delicious.

There have been menu wobbles as the family starts up their enterprise, but Zemari wants to give his brother Dawood and the rest of his resettled family hope in their new homeland by giving them productive work. Zemari worked with a friend to secure the kitchen and has his own restaurant experience working for local food vendors.

“My brother was very famous,” he said of Dawood, who played on the Afghani National Soccer Team. “People used to want selfies with him. Now he’s sitting here doing nothing. It’s very stressful for him. (With the restaurant) now, he can know people and talk. Customers all like him, and he’s busy,” Zemari said.

And that’s precisely what Zemari wanted for his family.

“I wanted them not to be thinking about Afghanistan, so they can recover. No one wants to leave where you grew up, but no Afghanistan exists that we knew,” Zemari said.

Chicken Gyro, $13.45: Seasoned chicken wrapped in a pita with lettuce, onions and tomatoes.

Fry Bread, $9.95: Dawood learned how to make this savory indigenous bread from a previous kitchen tenant, the Fry Bread Shop, that recently shuttered at the convenience store. A pouf of fried dough is topped with taco fixings including beans, cheese, olives and white and green sauce. Add lamb or chicken for an extra $1.95.

Baklava: This filo pastry filled with nuts and honey is incredible. Too bad it’s not available every day, so call ahead to inquire.

Plus: What to eat at this year's Gravenstein Apple Fair and Willi's Wine Bar turns 20.