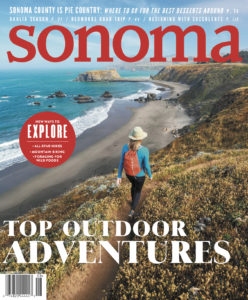 There are two ways  to get to the tiny town of Occidental — the locals’ way and the tourists’ way, says Jenay Hofftin, a restaurateur whose family has lived in the quiet, often-overlooked west county hamlet for generations.

Tourists go through Sebastopol, toward Bodega Highway, turning off at Freestone (usually grabbing a giant cinnamon roll at Wild Flour Bread on the way). It’s a fine route, she says, but lacks the subtleties and directness of Occidental Road.

“Occidental. It’s in the name of the road,” she sighs, wondering why anyone would go any other way.

So, I wind westward on Occidental Road from Santa Rosa through the Laguna Wetlands, past blueberry stands and the quilt of grasses and still pools by the riparian preserve.

Further along, the road narrows and overgrown foliage closes in on itself, creating shady tunnels. Farms give way to stretches of open land, with arterial roads branching off into the hills. Vineyards are scarce, and the redwoods begin to cast longer shadows as the elevation rises. Then, without warning, a small steeple appears, and the town of Occidental unfolds below.

Founded in the 1857, Occidental is one of a handful of Sonoma County outposts that remains mostly untouched by time, influencers, or wine magnates. If you’ve heard of the place, it’s probably for the red and white checkered tablecloth Italian restaurants like Negri’s Italian Dinners or the Union Hotel, places that built their reputations on nonna-style menus and old-school hospitality.

For generations (and generations and generations), these historic restaurants catered to Bay Area families heading to the cabins and watering holes of Camp Meeker, first by train and later by car.

In their mid-century heyday, these restaurants would serve as many as 500 people each night. Not exactly Michelin-star, gastro-molecular kind of stuff, but loved enough to stand the test of time.

Now, a new generation of restaurateurs are taking the reins of Occidental’s historic kitchens and bars, bringing fresh ideas to the 175-year-old town. But in a place where almost everyone is related by blood, marriage, or grudges, it’s not as easy as just changing a menu or hanging a new sign. A lot rests on honoring tradition and family ties, says Hofftin.

“We want to keep the old bones, but for the wellness and growth of this town, we need to get people here.

Owning restaurants is always a labor of love, but in this little town, it’s also about serious dedication.”

Leaning on the long wooden counter of the Altamont General Store, the newly minted cafe and mercantile she owns with her wife, Andzia, Jenay Hofftin is spending most of her Saturday answering the phone. The café’s Brooklyn-meets-Sonoma menu is getting some serious buzz after a rough first year in lockdown.

Andzia cuts Brussels sprouts with the kitchen crew as Jenay continues to buzz around the busy café, blonde curls barely contained by her headscarf. Not long ago, this was a derelict space that sat empty for more than a decade. Back in the day, Jenay says with a sly grin, she and her cousins would sneak inside for some teenage shenanigans. “Back then, it was still set up with a bar. We’d go in and party. But when Grandpa drove by with his lights on, we’d all have to hide until he was gone,” she says.

Grandpa was Joe Negri Jr., the patriarch of the Negri family and owner of Negri’s Italian Dinners and the namesake bar, Joe’s, which happens to be directly across the street from the Altamont. Joe Jr.’s parents opened the restaurant in 1943 and Joe’s wife, Evelyn, continues to run the restaurant with the family. Jenay’s mother, Terry, runs the Howard Station Cafe down the street, and Jenay’s cousins run Joe’s Bar with Evelyn.

“My family has deep roots here,” says Hofftin, who escaped small town life for college in New York and spent years on her own. But like her parents and their parents, she too felt the pull of family obligations, and came home to settle down and raise a family. “You move (other places) to have more than this,” she says looking at the all-too-familiar street outside. “But there isn’t more. There are redwoods here, the coast — it’s just such a good life here.”

At the edge of town sits Panizzera Meat Co., which provided the restaurants of Occidental with locally processed meat for three generations. But when the last Panizzera retired in 2014, butchery apprentices Ryan Taylor and Josh Cerda took over the then-struggling business. In just a few years, they’ve turned it into a sustainable, modern butchery with close ties to the past.

Every restaurant in town uses Panizzera meat in at least one dish. Taylor and Cerda sell lamb, beef, pork, and chicken along with 23 types of sausage, including one made from a recipe dating to the beginning of the 20th century. “The true identity of Occidental is in its Italian roots,” Taylor says. “We’re still an old school Italian butcher shop and we’re deeply entrenched in this community.”

Back at the Altamont General Store, Jenay Hofftin and I turn, mid-conversation, to watch a woman slowly ride a huge horse through the crowded downtown Occidental parking lot.

“Not normal, but not that surprising. It’s still the Wild West out here. You get all sorts of characters. There used to be a rooster that walked through town. Our town ‘mayor’ was a lost prophet named Ranger Rick,” Jenay says.

Communal settlers, weed growers, counter-culturalists, and the fiercely independent have long been drawn to this little valley between coast and inland, and, like the Italian settlers, are important threads in the unique fabric of Occidental. Says Hofftin: “It’s like our own weird little movie set here in west county, and I wouldn’t change a thing about it.”

Eating the Day Away in Occidental

A Sporty Breakfast — Howard Station Cafe: Whether you’re headed for a long day at the coast or you’re staying nearby to explore town, fill up with super-hearty banana walnut pancakes, a wild salmon Benedict, or biscuits and gravy at Howard Station Cafe. Cyclists who arrive in town for the start of the legendary Coleman Valley Road ride like to power up with oatmeal and fresh juices, including the Red Ferrari with apple, carrot, beet, and lemon. 3611 Bohemian Highway, howardstationcafe.com

For the Grill — Panizzera Meat Co: Stock up on dry-aged steaks, ground beef, sausages, and lamb to cook up back at home. It’s all locally raised, and the business has been in the community for more than 100 years. 3905 Main St., panizzerrameatco.com

Alfresco Family Lunches — Union Hotel: The oldest restaurant in town has a large covered outdoor patio as well as a new fire pit. Family-friendly food like spaghetti and meatballs, tortellini, pizzas, and big beefy burgers with a mountain of fries are excellent. The 19th-century saloon is a great spot to take a time-out for sports anda cold beer while the rest of the group explores nearby shops and galleries. 3731 Main St., unionhoteloccidental.com

Happy Hour — Joe’s Bar: Don’t miss cocktails with fresh-squeezed juices at Joe’s Bar with some sliders or a bowl of Nonni’s ravioli for a lateafternoon pick-me-up. We love the summery Lavender 75 with Benham’s gin, lavender, lemon, prosecco, and lavender bitters. Inside Negri’s, 3700 Bohemian Highway, negrisrestaurant.com

Picnics to Go — The Altamont General Store: We love the idea of a warm smoked pork bowl inspired by the Hawaiian Islands for a cool day at the coast. Grab a hot dog for the kids, a hearty Hawt Cobb salad to share and Straus soft-serve ice cream with plum shrub drizzle (for the daring) or caramel sauce (for the traditionalists). There’s also locally-made beet walnut bread from Bird Song, a cottage baker in Camp Meeker; fresh rotisserie chicken in the afternoons; and a fascinating selection of smallbatch wines, many from women winemakers. 3703 Main St., altamontgeneralstore.com

Jenay and Andzia Hofftin serve this sweet rice pudding for breakfast or brunch at their Occidental café. The base is forbidden rice, a wild black rice that turns purple in color when cooked and is packed with healthy anthocyanins — it’s available locally at Oliver’s Markets, Big John’s Market, and Sonoma Market. Assembled, the dish will keep in the fridge for two days; the rice and chia pudding will keep separately for five days. Serves 4-6.

½ cup passionfruit puree or juice ⅔ cup simple syrup ¼ cup toasted cacao nibs ¼ cup toasted coconut flakes Soak the forbidden rice for at least 6 hours or overnight in 4 ½ cups of water. After soaking, drain the rice and place in a saucepan with 3 cups of water. Bring to a simmer (not a boil), and simmer for 10 minutes. After simmering, drain any excess cooking water and return rice to the saucepan. Add coconut milk, rice milk, and sugar. Bring to a simmer. Sift in cornstarch and stir frequently for 8-10 minutes, then remove from heat and set aside.

Whisk together chia seeds, coconut milk, and coconut water to make the chia pudding. Then whisk together passionfruit puree and simple syrup to make an easy sauce.

The rice pudding can be served hot or cold. To serve, top a generous scoop of rice pudding with chia pudding, drizzle with passionfruit syrup, and garnish with toasted cacao nibs and coconut.

Chef Carlos Rosas, the owner of gourmet taqueria Barrio in Sebastopol, has taken the kitchen reins at Old Possum Brewery...