An escape from everything everyday: wildly popular Le Cirque de Bohème returns to Sonoma for a fourth season on November 25.

Ernest Hemingway wrote: “the circus is the only ageless delight that you can buy for money. Everything else is supposed to be bad for you. But the circus is good for you. It is the only spectacle I know that, while you watch it, gives the quality of a truly happy dream.”

If there’s one person in Sonoma County who’s with Papa on that one, it’s Michel Michelis. Michelis is the mastermind behind Le Cirque de Bohème, an old-fashioned “circus holiday spectacle,” which has enthralled local children and adults for the past three years during a series of sold-out performances. On Friday, November 25, Michelis’s circus will welcome guests at Cornerstone Sonoma for the premiere of this season’s show, “Somewhere.”

Echoing the style of 1920s nouveau-cirque performances and the French Christmastime circus tradition, Le Cirque de Bohème blends traditional circus acts — clowns, mimes, trapeze artists, tightrope walkers, contortionists and jugglers — with a captivating storyline and live music. Last year’s show, “Stolen Moonlight,” told the story of Jack London’s daughter who, saddened by the sudden death of her father and the subsequent silence of the moon, travels to Paris and encounters a mysterious man called “The Bohemian.”

The story of Michelis’s Sonoma circus began in Paris nearly 100 years ago. Having returned from the trenches in the first world war, Michelis’s grandfather, Gabriel Michelis, and his childhood friend Armand Pascal saved enough money to buy a circus in the heart of Montmartre. Le Cirque de Bohème then became a magical refuge for Parisians between the wars, a safe haven for the resistance movement during Nazi occupation, a popular hangout for American GIs following liberation, and a free spirited place to be in the ‘60s. When Gabriel and Armand passed away in the late 1960s, Le Cirque de Bohème died with them.

Revived 50 years later in Sonoma, Le Cirque de Bohème now carries with it the history, the spirit, and the ethos of those four decades in Paris.

With each show, Michel Michelis transports the audience to another, perhaps simpler, time far from the distractions of modern technology. “At the beginning of each show we tell the audience that time doesn’t exist anymore,” said Michelis, “when you say that to people they say, ‘yeah right,’ but at the end of the show many of them come up to me and say that it did happen; that they traveled away from the everyday.”

Michelis, who grew up in Montpellier in the south of France, is an energetic, enthusiastic and eccentric artist who you might expect to encounter in a fanciful French comedy, like Amélie. His accent is thick, his blue-eyed gaze intense, he gesticulates wildly and moves nimbly from one topic to the next as he relates a life-story filled with fascinating twists and turns. Growing up, Michelis was deemed the class clown in school. The future performer left home at 17 (not to join the circus, but to attend the prestigious Le Cours Simon drama school in Paris). Michelis then traveled to Italy, starred in several theater and film productions before returning to Paris to host a radio show, perform on stage at the Festival d’Avignon, and join in an improvisation theater troupe.

Michelis next traveled to America with Le Cirque de Soleil where he fell in love with the Bay Area and started playing the blues. He subsequently bought an antique barrel organ during a sojourn in Paris and founded a gypsy jazz band in San Francisco. He even found time to voice one of the characters in the Pixar movie “Cars 2.”  In 2012, Michelis brought Le Cirque de Bohème back to life in Sonoma.

“I always say my life is a series of accidents,” said Michelis, “I arrive at projects because someone suddenly left, or had a fight with the boss and got fired. I’m the rescue guy, the one they call in on short notice.”

What Michelis brings to each new artistic project, be it music, theatre or the circus, is a bohemian mindset — he believes that when it comes to art, you can’t worry with obeying rules, you need to be free. With the use of poetry, music and artistic performances, Michelis encourages the audience to experience something a little different and to realize there are no boundaries for the imagination.

“Many grandparents bring their grandchildren to see Cirque de Bohème. These grandchildren are of a generation constantly on computer or iPhone. Seeing the circus, they discover something different; that you can do art without a computer, by simply using your imagination.”

This year, the Cirque de Bohème audience at Cornerstone Sonoma can expect an eclectic lineup of circus acts and, according to Michelis, a “secret surprise.” At a time of turmoil, this particular “circus holiday spectacle” is a rare treat — an opportunity to escape everything everyday, if only for an evening. 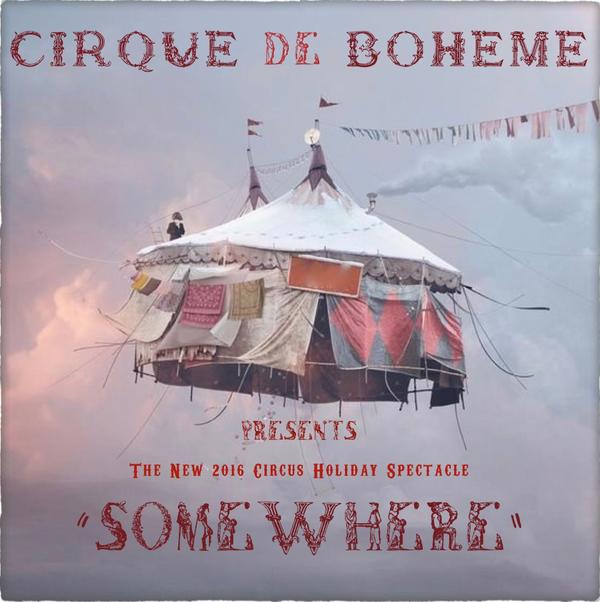 Delicious, and healthy, chocolate served at a French-style café with a flower-surrounded patio - could it get any better?