The soil is the same shade of rust you might find in a baseball infield, unlike the earth in surrounding valleys. Dust settles between his toes as he walks in river sandals along the rows. It’s on his hands, because every so often he digs into the ground to reveal cool, moist dirt hidden beneath the 6-inch blanket of dust. Over the course of several hours, Bernier will dig into the ground with his bare hands at least three times to make the same point.

The dust is on his two Corgis, Wasabi and Finnegan, who follow him wherever he goes, and on his Dutcher Crossing cap, advertising a winery that buys his grapes every year. The dirt is even settled on the handkerchief tied around his neck to cover the hole in his throat — a constant reminder of his battle with laryngeal cancer. 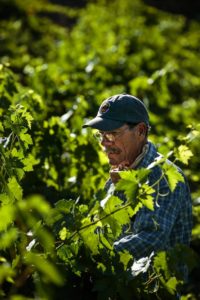 “I’m not a pioneer when it comes to dry-farming,” Bernier said, stopping at the edge of a row, his low, raspy voice pausing so he can catch a breath. “I was lucky enough to learn from some old Italians who still farmed that way in the ’70s.”

A passionately stubborn dry-farmer in an age of endless drip lines and over-irrigation, Bernier is the modern equivalent of a grape whisperer.

“They probably think I’m crazy,” he said, referring to growers who scoff at the idea of not watering the vines. “But I don’t care.”

Just imagine what they think in this record drought year, when many growers will spend thousands of extra dollars to douse their vines with more water than ever. It’s not like they can convert to dry-farming overnight: A vine used to being irrigated will wither in hot temperatures if the water supply is suddenly shut off. A vine farmed without added moisture is accustomed to the conditions and can usually handle the heat.

Travel abroad, and dry-farming vineyards is the norm. It is how most grapes are grown in Europe, where many countries mandate it by law. Looking back to Sonoma County in the 1950s and 1960s, it’s how nearly every vineyard was cultivated. That all changed in the 1970s, when Californians picked up the drip-line system from Israeli engineers, and drip irrigation took off on a massive scale.

“One day, our kids are going to wake up and see that there’s no water anymore and say, ‘I guess we’ll have to dry-farm,’” Bucklin said.

He’s standing in the shade of his barn, wearing a dusty Yankees hat, his gruff beard as unruly as the tendrils sprouting in every direction from his old vines. Little Girl, his blue heeler mix, plops down in the shade beside him. His cat, Tanner, is never far away.

Nearby, his ancient vineyard block unfolds like a patchwork quilt, originally planted with more than 30 varieties, some that don’t even have names. One he simply calls “spotted grape.”

Taking over from his father-in-law, organic farming pioneer Otto Teller, Bucklin is devoted to irrigation-free farming, even though he’s sitting on a well that produces 80 gallons a minute of “crystal-clear, sought-after water.”

Across the region, irrigation varies from valley to valley, vineyard to vineyard, variety to variety. A 2012 study of 12 vineyards along the middle reach of the Russian River, conducted by irrigation consultant Mark Greenspan of Advanced Viticulture, found that the average dose of water was 42 gallons a vine a year and that “some irrigations were not necessary and/or were excessive.”

In Napa Valley, Frog’s Leap winemaker John Williams estimates that he saves a minimum of 16,000 gallons of water an acre with dry-farming, according to a report by the Community Alliance with Family Farmers, a nonprofit based in Davis. CAFF estimates that of the 500,000 acres of wine grapes grown in California, only about 2,000 are farmed without irrigation.

Duff Bevill of Healdsburg, a longtime vineyard manager who oversees 1,200 acres, estimates he dry-farms or “very rarely” waters about a third of those vineyards. He was inspired by the same “old Italian” (the late Jim Guadagni, the unofficial “mayor of Dry Creek”) who taught Bernier how to dry-farm in the 1970s.

“Irrigation is a tool I like to have,” Bevill said. “And when I see a need for it, I want to have that tool in my toolbox and be able to turn it on.”

He points to the heat wave of 2010 that “fried” the grapes as a perfect example of the need for emergency watering. And even the most dry-farmed of grapes will need water during the first year of growth.

To be clear, dry-farming is not suitable in many vineyards, according to Rhonda Smith, Sonoma County viticulture farm advisor with the UC Cooperative Extension. She points to factors including soil type (for water retention and depth of root development), varieties (Chardonnay and Pinot Noir are particularly thirsty) and rootstock. Old-vine Zinfandel is the most commonly dry-farmed grape, but there are others. 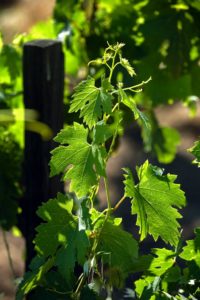 One of the biggest arguments against dry-farming is the lower yield. Typically, dry-farmed vines produce around 2 to 3 tons an acre, whereas irrigated vines yield 4 to 6 tons an acre.

Bernier said the average these days is about $2,500 a ton for Zinfandel and he gets approximately $3,200 “on our better vineyards.” Winemakers who treasure his grapes include Tim Bell at Dry Creek Vineyard, Jamie Peterson at Peterson Vineyards and Doug Nalle at Nalle Vineyards.

The payoff lies in the more concentrated clusters that do come to fruition with dry-farming, Bucklin said. “The size of the clusters is smaller and the size of the berries is smaller. And you have less juice-to-skin ratio, and so therefore more skin. And skin is where the flavor and color and tannin come from.”

In January and February, when seasonal Northern California downpours didn’t arrive and the days had an eerie, still sameness, Bucklin admitted that “I felt like the world was ending. That’s how grim I got.

“You feel helpless and you think you have to do something and yet you don’t. These vines have been doing this for 135 years. We always underestimate the plant’s ability to take care of itself.”

With moisture from rains in April and May still packed in the soil, his bushy, green, head-trained vines look as they do any other year as they grow toward harvest.

Likewise, Bernier has weathered the drought. Along with his 3 acres of Zinfandel and Petite Sirah, he sharecrops approximately 50 acres in Dry Creek Valley. On a hilly, 4.5-acre vineyard off Canyon Road, he squats down between rows and explains it like this: “The soil is charged, just like a battery is charged up. The later that the water hits the soil and you capture it, the more there is for the growing season.

“This year we got 16 inches of rain by April, so the soil was well-charged by the time we started cultivating, and it’s right here,” he said, digging about 8 inches deep to expose a darker-brown, packed, moist soil. 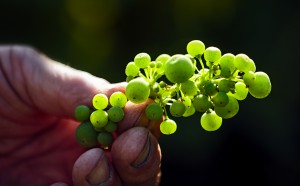 That soft dusty layer on top, the tediously cultivated dust mulch, helps seal the moisture in the soil. It’s the result of constant soil management and a much more demanding regimen of soil enrichment and amendments, rich cover crops and then composting, tilling and cultivating the soil to trap the moisture.

It’s what Bernier calls “feeding the ground.” He’ll come in right after harvest and compost before spreading tons of grape pomace (leftover seeds, skins and stems) and pulverized oyster shells between the rows. Later, he sows a cover crop of bell beans, peas, vetch, barley and oats that grows waist-high and naturally puts nitrogen in the soil. He chops it down in the spring and embarks on a religious regimen of discing, tilling and cultivating until the final result is 6 inches of a dusty mulch that seals in the moisture.

Dry-farmed vine roots have been known to spread out to 50 feet below the surface to seek moisture. Local lore has it that when Bella Vineyards dug its wine cave in Dry Creek Valley, old vine roots were poking through the ceiling, reaching down through the earth from 40 feet above.

So far, the hardy, drought-resistant St. George rootstock, developed in the 1800s to combat the vine-killing phylloxera root louse, has been the most widely dry-farmed. But UC Davis researcher Andy Walker is working to develop what some have hailed as the “cactus stock,” a rootstock that will need little to no water. He’s spent the past 25 years driving back roads in Texas, New Mexico and Arizona, looking for wild-grape rootstocks that thrive in the desert.

It’s a glacially slow process, but Walker’s dream is that in about 10 years, he’ll have developed a rootstock that requires hardly any water.

Before that happens, what will it take, short of rivers and reservoirs drying up, for more grapegrowers to try dry-farming? Stubborn ones, according to Bernier, will have to face the fear of the unknown.

“You have to just want to do it,” he said. “It takes a leap of faith. For somebody who’s been hooked up to drip lines their whole life, they don’t understand.”

Here are a few economic choices in wine to enjoy this autumn.