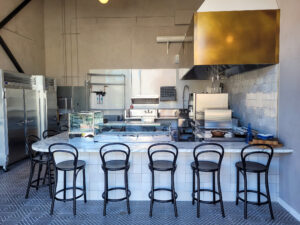 Sebastopol chef Larry Vito has found a buyer for his restaurant, Bar B Que Smokehouse.

We reported earlier this month that the 71-year-old restaurateur was looking to retire and head to Mexico, where his 36-foot sailboat awaits him. He cited increasing labor and food costs, along with the high cost of outsourcing deliveries to companies like Grubhub and DoorDash, as additional reasons to close shop.

At the time, Vito said he would close the restaurant in mid-September after failing to find a restaurateur willing to purchase the 13-year-old business. Now that’s changed, he said, and the barbecue spot “will remain open for the foreseeable future.”

The sale is expected to be complete by November, according to Vito, but he did not offer further details. The restaurant will continue to operate its normal hours in the meantime.

And yes, Vito plans to head to Mexico this winter to sail his restored yacht in Mexico’s Sea of Cortez.

“Since the announcement, so many of our clientele have stopped by, emailed and called to let us know how upset they are about the closure. We are amazed and grateful for their recognition and support,” Vito said.