Phillip Engel bluntly calls the renovation that ate his life “an accident.”

He and spouse Mark Goff were snooping only out of curiosity when they checked out a house for sale near downtown Healdsburg, not long after the economic crash of 2008.

“We weren’t looking to buy. We just wanted to see it,” he said of the dowager at the corner of North and Fitch streets, listed for $1.6 million. 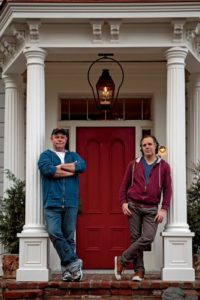 It was a nice address, but the condition of the house was deplorable. What was then known as the Marshall house, built by town blacksmith John Marshall in 1870 as a gift for his bride, was a magnificent wreck, visibly sagging on its chalky foundation.

Power to most of the interior had been shut off in the 1950s, and someone had strung extension cords along the ceiling from the still-functioning electricity in the back of the house. The peeling plaster walls had gouges and gaping holes. An upstairs bathroom was alarmingly cantilevered into empty space, as if, Goff said with a laugh, Marshall’s wife had insisted he not bring it “into the house.” Busted window mullions gave the three-story mansion a tragic-eyed appearance from the street.

But he also unexpectedly fell hard for the aging beauty, looking past its flaws to its fabulous bones: old-growth redwood framing with fir and walnut detailing and an interior left largely untouched by a century of the unfortunate remodeling trends that had stripped other old Victorians of their best assets.

Goff and Engel, then living bicoastal between New York and Studio City, Calif., yearned for a quiet, small-town life and kept an eye on the property as two potential sales fell through. Eventually a part of the large lot in back was split off and the price dropped to less than
$1 million, within striking range of their budget. But the house was too dilapidated to qualify for a bank mortgage.

“It was completely unintentional,” Engel said of the couple’s decision to buy the extreme fixer-upper in June 2009, and do most of the work themselves. “The only thing we were looking for in terms of a house is the location, fairly close to downtown.”

Engel and Goff worked out a deal with the seller to carry the mortgage for three years, giving them time to get the house in a condition habitable enough to quality for long-term bank financing. They optimistically thought they could pull it off in less time, but it took exactly three years. They came in just under the wire, working right up until the day before the appraiser arrived.

As soon as the “For Sale” sign came down, Engel and Goff threw an impromptu party in the front yard with sparkling wine, starting what would become an open-porch policy with friends, neighbors and other townsfolk who have watched in fascination as the restoration unfolded.

A month later, they held a “Golden Ticket” gala. Fancy gold-foil invitations similar to the winning tickets to Willy Wonka’s Chocolate Factory were issued to pretty much anyone who showed interest. The bring-your-own flashlight affair was a chance to see the spooky interior before Engel and Goff began stripping it to the studs.

“We should be certified and locked away,” Goff wrote on Sept. 2, 2009, a day before building contractor Jim Glazier had the house lifted from the remains of its foundation. It would be the first post in a blog, 227northstreet.com, which for nearly five years has documented the pair’s fortunes and misfortunes in the restoration.

Goff had some experience in home improvement, having redone a Craftsman bungalow. He and Engel spruced up their midcentury Studio City home. But they had done no remodeling that came even close to a complete restoration of a historic building. 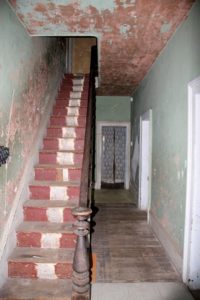 “Other people thought we were out of our minds,” Engel said. They had to figure out everything, from plumbing to electrical wiring. Plastering was particularly onerous.

“It’s the most physically challenging,” Engel explained. “The plaster is heavy and it’s wet and you have a very short window to work with it. You have to keep going. You can’t stop and start or take a break.”

The three-story Italianate home, with its classical face, pillared porch and authentic flickering gaslights out front, is now quite the looker. There’s no part of it, inside or out, that hasn’t been touched in some way. It took until January 2011 for the house to be in good enough condition for Engel and Goff to move in.

The house had been sorely neglected for more than 50 years, after Charles Frampton bought it as an investment in 1955 and sold it to a daughter in the 1970s for $1. A series of tenants occupied the house, though it received little attention in the way of maintenance.

Engel and Goff worked on the house seven days a week and into the night. They didn’t vacation. Each works from home (Goff in graphic design, Engel in high-tech), so when their day jobs ended at 5:30 p.m., they grabbed their tools and began another shift. 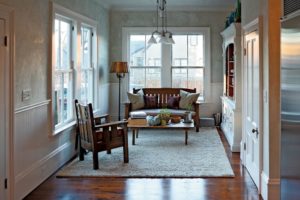 In 2013, the couple hired Timothy Hilton of Earth Tone Painting in Healdsburg to give the exterior a face of soft gray with white trim. They also did a lot of exterior trim themselves, including skirting board near the foundation and wooden gutters leading to the decorative wood corner treatments called quoins.

This year they’ll take on the window sashes and exterior paint in back. Inside, it’s down to the fine details, such as trim work, hardware and painting the doors. And then there’s the matter of the third floor, which still remains untouched.

Engel and Goff are circumspect about how much they have spent on the house, partly because they purposely don’t have a budget. They pay for projects as they go, out of their income. 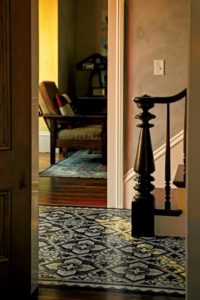 The two feel a certain amnesia about the whole thing. Engel figures it must be a little like childbirth.

“If people remembered what it was like to give birth, they might not do it again. Magically, they don’t remember the worst of it,” he mused. “This house, I think, is like that. If we remembered everything up to this point and you asked if I’d do it again, I’d say no. But when I look at it now, I don’t see a time where there were no walls or no floors. It’s strange. Now it’s just seeing this really great house, and we love it.”

The corner of North and Fitch streets has become a bit of a roadside attraction in Healdsburg, with a constant stream of people walking or driving by to offer a thumbs-up or say thanks for saving one of Healdsburg’s architectural heirlooms.

“I tell people I’m very famous within a five-block radius because of the house,” Engel said with a chuckle. “But we realize we don’t actually own this house. We’re just custodians. In many ways, this house belongs to the community.”