“Shane who?” I said, when invited to taste “Shane’s wines” a few years ago.

“You know, Shane Finley. Former winemaker for Kosta Browne, Lynmar Estate, Paul Hobbs. He now has his own brand.”

I didn’t know then, but quickly learned, that Finley is one of Sonoma County’s most talented winemakers. His track record at some of the region’s most acclaimed wineries might suggest his name would be widely recognized, yet he’s worked largely under wraps, and humbly, for proprietors smart enough to put their wines in his hands while collecting the kudos themselves.

Finley has emerged from relative obscurity with his own Shane Wines brand, for which he produces luscious, energetic pinot noirs from Russian River Valley and Sonoma Coast vineyards ($42) and a mouthwatering pinot noir rosé from the Sonoma Coast ($17). A second label, Constant Disruptions, allows Finley to fiddle with zinfandel, syrah and other varietals that satisfy his urge to experiment. He continues to enjoy the process of producing wines for others: Al and Lisa Brayton’s Thirty-Seven Wines in southern Sonoma and AldenAlli, a collaboration of Kosta Browe co-founder Dan Kosta and star chef Emeril Lagasse’s wife, Alden.

“I’ve always had the desire to be my own boss. It’s exciting to conceptualize a wine from vineyard to bottle to the consumer and execute the plan on your own,” Finley said of establishing his own brand. “My own wines are part of my identity. They’re an extension of who I am and a catalog of my winemaking progression.”

Finley, who lives with his family in Sebastopol and makes his wines at custom-crush facilities, is one of many under-the-radar Sonoma winemakers worth knowing. Without their own winemaking facilities, tasting rooms and marketing budgets, they rely on word-of-mouth, wine clubs, virtual tastings and grit to remain in business as pandemic restrictions enter an 11th month and selling wine continues to be difficult for the little guys. Large producers still have supermarket and big-box stores as distribution channels. Finley, with a typical annual production of 1,500 cases of Shane Wines, and his small-volume colleagues are on their own.

“I’m a one-person operation; I have to be able to pivot from the cellar to the vineyard to sales to marketing to shipping to admin, etc.,” he explained. “I make the wine, but I also have to sell it, market it, pay for it and keep the operation running. You have to be more than proficient in all these areas to operate a small brand.”

Finley is not alone. These winemakers are in similar boats, though rowing with varying techniques:

Married couple Cecilia Enriquez and Dana von Sternberg share a Forestville home and vineyard estate, yet they don’t collaborate on wine brands, at least not officially. Enriquez is proprietor/president/winemaker at Enriquez Estate Wines, which her New Jersey-based family established in 2011, first with a vineyard purchase in the Petaluma Gap and later by acquiring Mac McDonald’s Vision Cellars vineyard on Eastside Road in the Russian River Valley.

At her Petaluma Gap vineyard, Enriquez embraced tempranillo, which grows remarkably well in the cool, windy conditions there. Her family sold the vineyard yet continues to purchase tempranillo from there. The former Vision Cellars site gives her vibrant pinot noir grapes, and nearby growers supply fruit for her crisp, dry muscat and Brisa white blend, each given two years or so of bottle age.

Von Sternberg, a co-owner of Vokel Cellars, focuses on cool-climate chardonnays and pinot noirs — most of them vineyard-designated — and a robust yet chiseled Dry Creek Valley merlot. The couple’s individual-brand annual case production is in the hundreds, not thousands, and online and wine-club sales drive both businesses. Private tastings at the Eastside Road barn were successful before the pandemic and will resume when COVID-19 restrictions are lifted.

“We pivoted to virtual-tasting packages that we ship nationwide, and we’ve also been getting creative with virtual wine and food experiences for locals,” Enriquez said. “We’ve partnered with chefs on brunches, with one for Valentine’s Day that includes flowers, paella and a bottle of wine. For those not local, Dana and I do a husband-and-wife virtual tasting package that includes a bottle each of our wines as well as a dessert box.”

All in the drive to stay relevant, and in business.

Martha Stoumen makes her wines at Pax Mahle Winery at The Barlow in Sebastopol and has won an avid following for what she doesn’t do to the juice.

Stoumen is a local face for natural wines, those produced with as little human intervention as possible. That typically means organically grown grapes, no commercial yeasts for fermentation and little, if any, post-fermentation stabilizers or enzymes. The Sebastopol native does add small amounts of sulfur to her wines as a preservative — otherwise, they’d turn to vinegar — but the goal is for her wines to reflect the place they were grown, without masking the character of the grapes.

Stoumen’s Nero d’Avola red wine comes from the warm interior of Mendocino County. There is also a sparkling zinfandel, unusual blends and a more traditionally styled petite sirah. Like many “natural” wines (there is no official definition for the term), a Stoumen wine occasionally has a funky note, and she’s OK with that. It’s what a vineyard gives her.

With myriad grape varieties in her repertoire, all viticultural regions considered and a devoted following of younger wine drinkers eager to embrace the unconventional, Stoumen is a rising star, though like other small producers, she needs to stay on her game. That takes patience.

“Patience in the vineyard means composting rather than adding synthetic fertilizers, allowing predatory insects the ability to outcompete pests rather than spraying insecticides and doing proper handwork, such as pruning for vine longevity rather than high yields,” she said.

“Patience in the cellar means letting the natural yeast and bacteria present on the grape skins perform fermentation and allowing longer macerations and aging to provide stability rather than using added tannin, acid or stabilizing agents in my wines.”

The formula works for Stoumen and for those intrigued by the so-called natural-wine movement in Sonoma.

Tom Mackey couldn’t help himself. Following his retirement in 2011, after 40 years as founding/chief winemaker at Sonoma Valley’s St. Francis Winery & Vineyards, he realized he needed to keep his hands dirty — with vineyard soil, grape-acid etchings and inky black juice.

Not one to spend hours on a golf course, Mackey partnered with zinfandel fanatic and geologist Clyde Galantine to create Tom Mackey Cellars (Graham Parnell would later become a partner), with the purpose of producing cabernet sauvignon, merlot and zinfandel from the Sonoma Valley vineyards Mackey knew best. So much for his retirement.

Their Montecillo Vineyard zinfandels and cabernet sauvignons come from old vines ($30-$40), and the Sirius Sonoma Valley Red Blend ($46) won the best of class award at the 2020 Sonoma County Harvest Fair. The wines are not flashy nor exotic. They are honest drinks that are varietally correct, fairly priced and made in a style Mackey wants to enjoy.

“I (was energized) to make wines I wanted to make, with no one bearing down on me to meet a particular criteria,” he said of founding Tom Mackey Cellars.

At 450 cases or so of wine production a year, Mackey is just fine with his new business model, though it doesn’t come without challenges.

“2020 was the first time in 43 years I didn’t have a vintage,” he said of the season in which wildfire smoke tainted grapes to the point they weren’t harvested. He produced no wine from 2020, and the loss in sales cut deeply into the bottom line for this small producer with no tasting room and no avenue to restaurant sales while eateries remain open for takeout only.

“COVID (canceled) tasting events, at which we won new customers,” Galantine said. “Tom was known as the ‘merlot master’ at St. Francis. He was at the back end of the Zinfandel Advocates & Producers organization for years. To have him at the table at tasting events, pouring the wines, helped get us recognized.”

Without that exposure — at least for the time being — Tom Mackey Cellars and other micro-winery brands in Sonoma have to work hard to sell their wines in extraordinarily unusual times. Yet it’s an opportunity for consumers to spend their money where their hearts are. 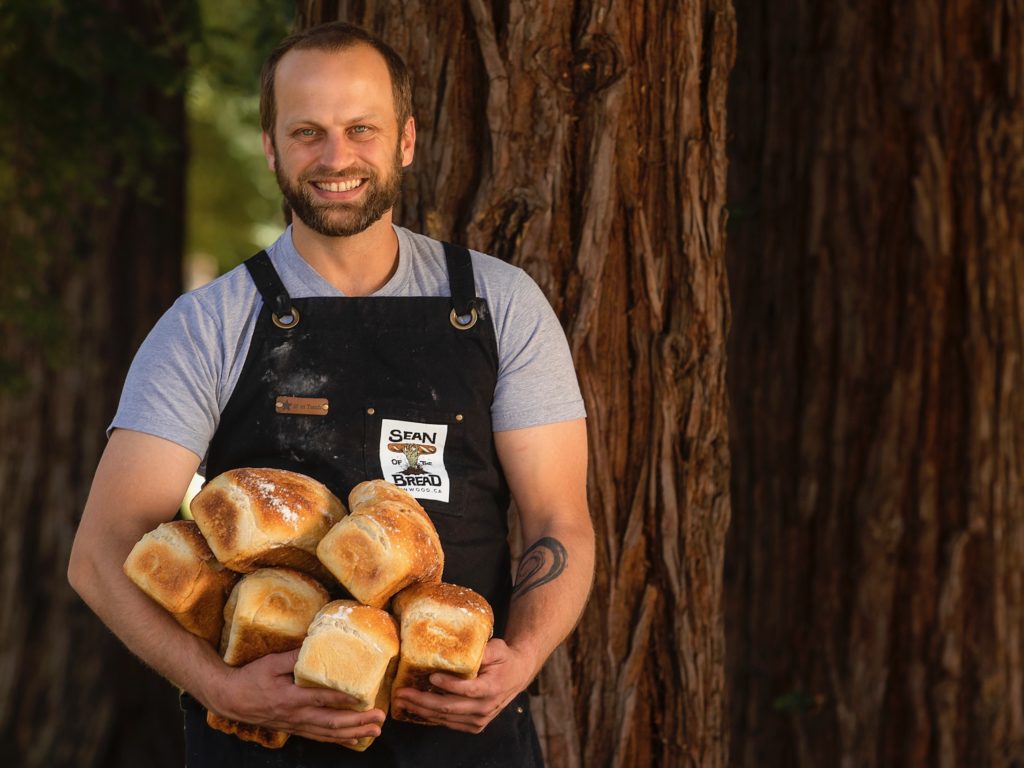 Amid Pandemic Shutdowns, Some Local Chefs Started Working from Home

The beignets will be back. And there's a new bakery, a new butter bar and a new international takeout to...