I’m going to tell thankfulness to take a flying leap this Thanksgiving.

Even in good times, sitting around the table with the gravy congealing and the mashed potatoes going cold while everyone thinks of something gratitude-y to say makes me a bit queasy.

Yes, I realize that’s like saying you hate puppies or Santa Claus. Hear me out, though. I’m not usually a cynic and I’m frequently found communing with the universe to share good vibes, but let’s be honest here — it’s been a hell of a year.

Sonoma County has been through it and as much as we appreciate all of the first responders (and we do), along with the fact that no one died during the fires (amen), the honest truth is that we’re all seriously exhausted and traumatized right now. And that’s okay.

We’re tired of smiling and saying we’re just fine.
We’re tired of every siren or whiff of smoke sending chills down our spines. We’re tired of the power outages and spending hard-earned money restocking our fridges again and again. We’re tired of bad people profiting off of our suffering. (Really tired).

We’re tired of businesses giving up and friends moving to Texas.

Yet through it all, like the good and grateful people we are, we paste on our Sonoma Strong “resilience” smiles and say we’ll all be okay.

We aren’t okay sometimes, and no one says we have to be just because it’s Thanksgiving. I give us all permission to say phooey on all that nonsense.

Look, we don’t have to always feel grateful. It’s okay to feel upset, hurt, mad, scared and all of that stuff. I won’t pretend I’m so kind of therapist, but I have paid some great ones a lot of money. It took me about five years to learn some really deep lessons about moving on from trauma and hurt. I’m a slow learner sometimes.

Suffice it to say, you should take what you like and leave the rest behind. 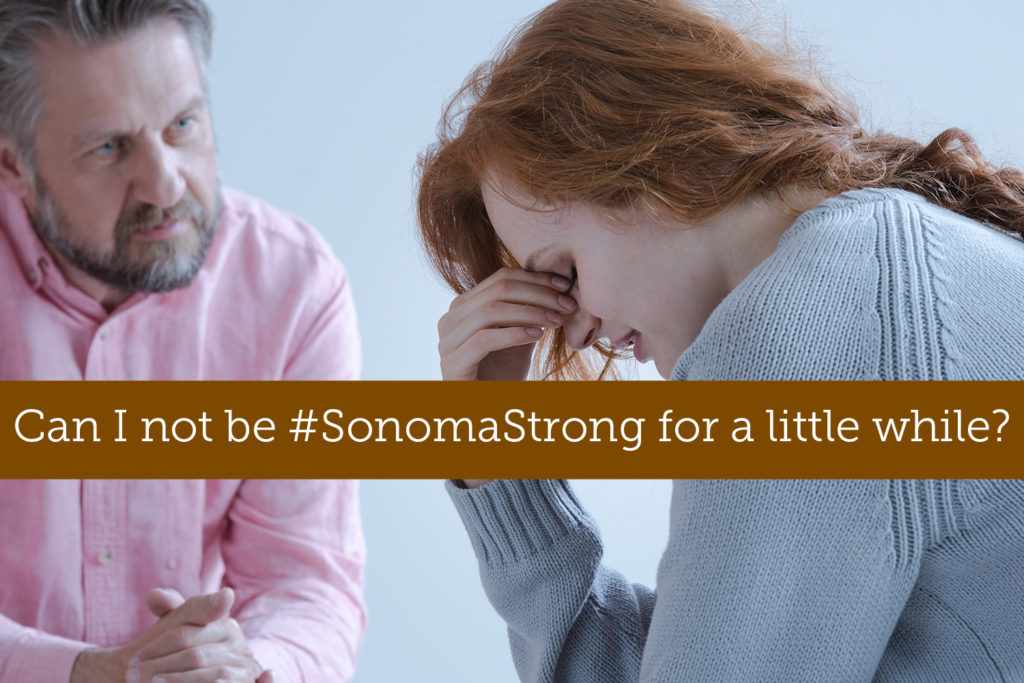 Don’t Feel Bad About Feeling Bad: Dude, you’re bummed and that’s okay. You’ve been through a lot. Doesn’t matter if it’s a BIG TRAUMA or a little trauma, it’s all trauma. I still have nightmares about being in evacuation traffic. Now that it’s over, it’s okay to let down a little and work through your feelings. Stuffing is for turkeys, not for feelings.

Let’s Talk About It: People are afraid of jinxing themselves by talking about what’s happened. People are also scared of black cats and ladders. Get over it. Ask people how they are, and when they say “fine”, ask them how they really are. Listen to what they have to say; cry with them, yell with them, get angry with them and tell them it’s okay to be upset. If they don’t want to talk about it, offer them a cup of tea and just sit. Also, therapy is awesome and totally normal and healthy.

Practice Patience: I am the least patient person in the world. No, really. Ask anyone. When I know I’m going to wait longer than 35 seconds for something I put on my “patience hat”. It’s imaginary, of course, but when I’m wearing it I have the magical superpower to not mow people down with my shopping cart. I think about String Theory or just stare into space instead.

Reframe your impatience by thinking about how great it is that we’re supporting our local economy with all this shopping! Play a little Candy Crush on your phone while you’re waiting. Joke with your kids, smile at a stranger, have a conversation. Don’t be That Guy. Anger is contagious, but so is happiness.

Be A Little Selfish: You aren’t required to make a pumpkin pie from scratch. Your local pie shop has some very tasty ones (if you’ve reserved one). There is no shame in prioritizing yourself sometimes. I give you permission to not go to a party that will make you miserable. Instead, get a massage, read a book, do a little “self-care” by slowing down and enjoying an activity that brings you joy. Go to the beach and just watch the waves.

Do Good: You don’t have to be Mother Teresa to be a saint. You can just as easily pay it forward by giving up a parking spot to someone, laugh at a dumb joke, hug someone who seems down, ask a friend to dinner, leave some candy on a co-worker’s desk or — major karma points — pick up that dog poop everyone’s been side-stepping (or stepping in) for days.

Reflect. Breathe. Be in the Moment:  If you haven’t mastered “the breath” yet, lemme break it down. Close your eyes, put your feet firmly on the ground, breathe deeply through your nose and slowly let it out. Repeat as needed. Sit quietly for a minute, away from the hubbub. Take a walk. Your brain has to refocus to move your legs and you’d be surprised how just a quick spin around the block can clear your head. Spend a minute noticing something pretty…the sky, a leaf, a well-manicured lawn.

Cry or Get Mad (in a healthy way): Crying is so cathartic, but I haven’t had many tears left lately. Here’s a trick: Watch a television show or movie that touches you, preferably alone. Do the ugly snotty, heaving sob without any judgment. If you need to get angry, then get angry! The trick here is to not scare the children, dog, spouse or bystanders. One of the most satisfying things in the world is to throw a piece of Kleenex as hard as you can. They sort of flutter down, which is hysterical, but it feels good to just pull them out of the box one by one and throw them with a “Harumph!” or “Take That!” 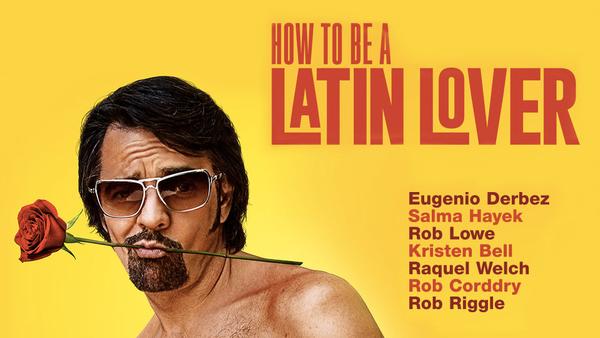 Laugh: Find that funny friend that has you in stitches for hours. Watch “How to Be a Latin Lover” on Netflix. Dress your dog up. Just let it all go, cause it’s going to be okay.

Whether you're looking for a midday cuppa tea or an afternoon extravaganza with finger sandwiches and pastries, here are our...