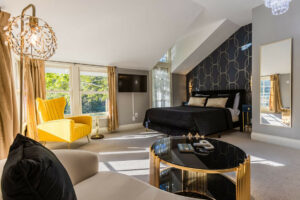 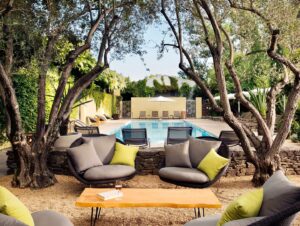 A Wellness Weekend in Sonoma for Stressed-Out Souls

As short-term rentals gain popularity across Sonoma County, some zany options for accommodations have emerged in Petaluma, including one that’s nestled about 30 feet up in a tree in Cherry Valley.

The treehouse, owned by Petaluman Joe McDonald, can be booked through Airbnb, a website offering nightly accommodations from hosts in more than 190 countries. McDonald said he’d originally enlarged and remodeled the existing treehouse as a guest bedroom, but ultimately decided to offer the airy space as an option for travelers.

“The original treehouse was there when I bought the house about five years ago,” he said. “It was small and I couldn’t even stand up in it. It just sat there for a few years in this majestic cork oak tree, empty and forlorn, until I decided to make it larger and more comfortable.”

The 63-year-old photographer hired local contractor Ray Todt, who collaborated with McDonald to create a space with 12-foot ceilings, a sleeping loft, a metal circular staircase and “all the amenities that one would want or need,” he said.

The entire treehouse, which has room for two adults with a bed and a bathroom, as well as a TV and wireless internet, can be booked for $155 nightly.

McDonald, who said he’s been a member of Airbnb for less than a year, joined as a way to recover some of the expenses from updating the treehouse, and as an opportunity to showcase the space.

“I felt it was so unique that I wanted to share it with others,” he said, adding that treehouses have been close to his heart since his parents built a treehouse 40 feet above ground at his childhood home in Iowa, and the structure was immortalized _on the cover of Picture magazine.

Gale Hayman, an artist in Ojai, was the first person to stay in the treehouse last May. Originally a New Yorker, Hayman grew up sailing in Martha’s Vineyard and compared her experience in the treehouse to that of being on the water while sailing.

“I felt like I was in a boat,” she said. “When you’re in a boat you are in your own pod out in the water alone. That’s what it’s like in the treehouse. … I thought it was fantastic. It’s a good little travel spot to get away.”

Since Hayman’s inaugural visit, between 70 and 100 people have stayed at the treehouse, with about 70 percent of guests coming from California, while the rest have come from out of state or from far-flung locations such as France, Germany, England and South America, McDonald said.

“Petaluma is a pretty desirable town right now and it seems to be more of a destination than it’s ever been,” McDonald said.

McDonald’s rental is one of many off-the-wall options listed on Airbnb in Petaluma, with others including a second treehouse hoisted in a eucalyptus grove in Chileno Valley on a property that housed the Swallowtail Studios glass blowers collective.

Other listings include an Airstream travel trailer with maid service, complimentary organic coffee and homemade crepes parked at the boutique Metro Hotel & Cafe near downtown, or a “Spartan Imperial Mansion” 1950s era-trailer on a quarter acre near Tomales.

For those looking to soak in Petaluma’s sprawling vistas, there’s a luxury custom-built cabin located on a 43-acre Petaluma vineyard, or a cottage on a 28-acre working farm, among other accommodations.

A Grandmother’s Guidance: The Roots of Healdsburg Shed Owner

As a youngster, he helped in the kitchen of what would evolve into one of the most famous restaurants in...