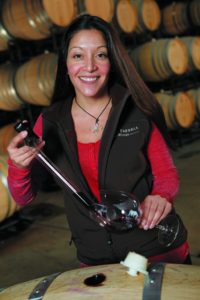 She would have been a chemistry professor, if wine hadn’t gotten in the way.

Theresa Heredia, winemaker at Gary Farrell Vineyards & Winery, earned a bachelor’s degree in biochemistry, was a scientist focused on cancer related peptide research, and a Ph.D. candidate in chemistry at UC Davis.

But her studies and enology-student colleagues led her to appreciate not only the science of wine, but the pleasures of drinking it. She switched course to winemaking studies.

After working in Burgundy, France, at Domaine de Montille, Heredia was hired as enologist at Saintsbury winery in Carneros, then as a winemaker at Joseph Phelps Vineyards in St. Helena. Phelps sent her to Freestone to launch Freestone Vineyards on the Sonoma Coast, and the Chardonnays and Pinot Noirs she made there were remarkable — so much so that Gary Farrell management snapped her up in spring
2012 as its winemaker.

Heredia’s preference for elegant, crisp, mouthwatering wines — which include Sauvignon Blanc, Chardonnay, Pinot Noir and a lovely rosé of Pinot Noir — match the winery’s house style, established by founder Gary Farrell in 1982. He sold the company in 2004, and under current owner The Vincraft Group, Heredia has been given the ability to purchase grapes from some of Russian River Valley’s most respected
vineyards, among them Rochioli, Rochioli-Allen, Hallberg and Westside Farms. A Pinot Noir and Sauvignon Blanc from Heredia made our Top 100, though several other of her wines would be equal replacements. The wines from this producer have never been better.