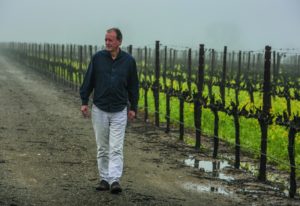 No Wine Country is too far for Nick Goldschmidt. The winemaker’s home base is Healdsburg, and his Cabernet Sauvignons and Merlots from Alexander and Dry Creek valleys are typically terrific
(two made our Top 100).

Once the Sonoma Crush is over, Goldschmidt hops on an airplane for New Zealand, Chile, Argentina or some other far-flung country, as a
consulting winemaker for 26 wineries. It’s a brutal life of travel, winemaking and sales calls across two hemispheres, but his five kids are
mostly grown, and Goldschmidt seems to thrive under the pressure. He was once asked, “How do you get it all done?” “I don’t do any of it very well,” he replied with a laugh.

A New Zealand native, Goldschmidt moved to Sonoma full time in 1989 and was hired as associate winemaker at Simi Winery under Zelma Long and Paul Hobbs a year later. He became Simi’s chief winemaker in 1991, and later rose to vice-president positions at Allied Domecq Wines USA and Beam Estates.

This doesn’t count the wineries for which he
consults. Whew.

Open for a little more than a year, Hamel Family Wines is one of Sonoma’s most stylish — and ambitious...