He’s produced wine at Simi, Matanzas Creek and Chalk Hill wineries, and Dominus and Rudd estates, all of which benefited from his experienced gained at the Moueix family’s famed Château Pétrus in
Bordeaux, France.

Yet David Ramey found his final winemaking home in Healdsburg, with Ramey Wine Cellars, where he produces spectacular Chardonnays from Russian River Valley, Sonoma Coast and Carneros, sturdy Syrahs from the Petaluma Gap, and Cabernet Sauvignons from Napa Valley. 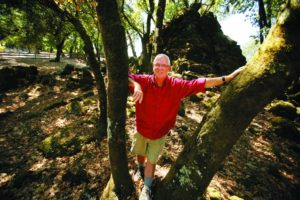 Two of his wines are in our Top 100 — the 2012 Ramey Ritchie Vineyard Chardonnay and 2012 Rodgers Creek Syrah — although other Ramey wines could have easily made our list.

In 2013, Ramey and his wife, Carla, purchased Westside Farms in the Russian River Valley, their first owned vineyard; additional Chardonnays and Pinot Noirs are in the pipeline from this site on Westside Road.

Ramey is one of California’s most cerebral and science-based winemakers (his graduate degree thesis was on volatile esther hydrolysis, or how aromas evolve in wine), but also had the marketing smarts to start Sidebar Cellars, a line of lower-priced wines (around $25) that includes a bright and racy Russian River Valley rosé, Lake County Sauvignon Blanc and unusual Kerner white wine from Lodi.

The Rameys’ daughter, Claire Ramey-Pejovic, joined the winery in 2013 and has brought youthful savvy and energy to the business. Her brother, Alan, is a new addition to the team.