I’m a sucker for secrets. I’m guessing you are too, because who doesn’t love a wink-wink moment that leaves everyone else wondering what you know? Oh, the smug deliciousness of it all.

This “secret” menu isn’t all that secret, they offer it Wednesday through Sunday for lunch and dinner, tucked into their regular menus. What’s on the down-low is that it’s the only place we know of that serves dosa—the big-as-your-forearm savory Indian crepes—along with crunchy bhel puri, paani-puri and an Indian rose syrup dessert called falooda kulfi.

This is real-deal Indian street food, things that can be found in the hawker stalls of Mumbai or Delhi. Though many of the names, flavors and textures may be new, it’s a window into possible things to come from the Chandi Hospitality Group, headed up by Punjab-native Sonu Chandi (Stout Brothers, Beer Baron, Bibi’s Burger Bar, Mountain Mike’s), who’ve long toyed with opening an Indian restaurant. After trying the flavorful vegan and vegetarian apps, along with more indulgent meat and cream dishes, we think they’re headed down the right track.

Here’s what to try:

– Bhel Puri ($6.50): Think rice crispies covered with tamarind and mint sauce with chickpea noodles, cilantro and onions. The mix of sweet, spicy, sour flavors and crunch made it our favorite dishes.

– Paani-Puri Shooters ($5.50): This street food is one of the most popular in India, and frankly, I don’t think we appreciated the dish without more of an explanation. Minty, spicy green water in shot glasses suspend hollow puri puffs filled with sprouted mung beans, chana (small garbanzo beans) and potatoes. Worth another try.

– Vegetable Samosa ($5.50): Fried pastry dough filled with curried green peas and potatoes, served with tamarind sauce and mint chutney. So tasty, you’ll want to gobble them up, but the inside is roughly the temperature of molten lava, so don’t pull a Hot Pocket moment.

– Paneer, Chicken Tikka Dosa ($10.50): Savory Indian crepes made with rice and lentils the size of a small bicycle wheel are stuffed and folded with seasoned potatoes and other goodies including fresh Indian cheese (paneer) or tandoori chicken tikka masala. Also a vegan option or cheddar cheese-filled dosa for people who like ruining perfectly good dosa with cheddar cheese.

– Falooda Kulfi ($7.50): Having just finished salivating over Chetna Makan’s “Chai, Chaat & Chutney: A street food journey through India”, finding a version this creamy frozen dessert was absolute serendipity. Kulfi (an eggless ice cream) is mixed with cold noodles, rose water and basil seeds. It’s not for everyone, but it’s definitely for me. Warm Galub Jamun ($4.50), is a pretty standard Indian dessert of sweet donuts soaked in a cardamom-infused sugar syrup so sweet just thinking about it will give you a cavity. And I still don’t like it. 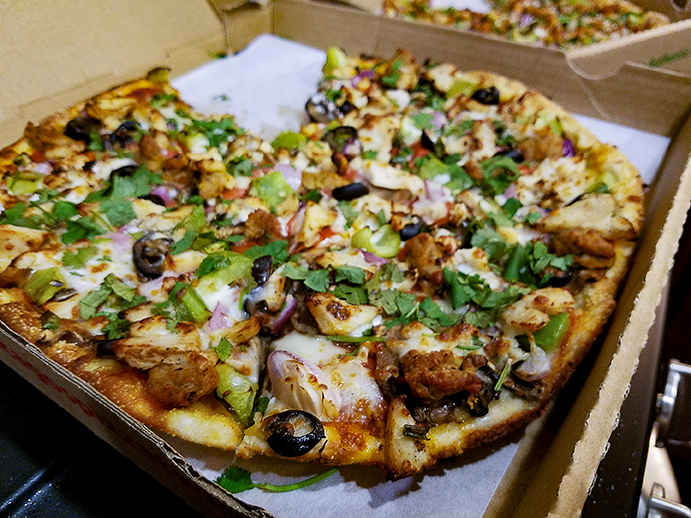 Curry Pizza? It's a Thing, and It's In Santa Rosa