Have you ever admired a painting or piece of art, considered buying it, and then been struck by the thought, “But where would I put it?” Ron Collins doesn’t face that problem. He has his own private art gallery, hidden away in the Petaluma hills, locked behind gates, and enjoyed only by Collins and those he invites over to share in its eccentric abundance.

His 13,000-square-foot country French-style chateau, built in 1993, sits on a 24-acre estate adorned with dramatic outdoor sculptures, including a massive rendering of Venus giving the moon a bath, entitled “Luna is Happy.” Inside awaits a vast array of artwork on three highceilinged floors. Collins doesn’t know how many pieces he has, but says there are “at least 1,000.”

Collins, 83, a native of Dallas, Texas, still wears his signature black leather cowboy boots. Although he majored in math, he remembers loving art since he was a young boy. The first half of his career was in the aerospace industry in Texas, until 1982 when he relocated to San Francisco to handle the finances and business administration of his brother’s company, Now Designs. He stayed with Now Designs, a textile company that specializes in aprons, potholders, dishtowels, and such, until his brother Donald Collins sold the company in 2004.

The Petaluma chateau was built and designed by Donald Collins’ life partner, Robert Danley, an industrial architect. The couple lived there until Robert passed away in 2006, followed by Donald’s passing in 2011. Ron Collins, who lives in Marin County, then inherited the property and turned it into a private display of his personal art collection.

Every medium is represented — paintings, sculpture, ceramics, collages, mixed media, photography — and the majority of the work is contemporary. “It’s an eclectic collection with a scatterbrained edge,” he says.

“It’s like a box of chocolates.” His only true guideline is to acquire things he enjoys. A great deal of art speaks to him, and he is not driven by price or investment value. “Something might be $100 or $1,000 or $5,000. I just buy what I like.” (Some pieces are much pricier.) He adds to his collection as frequently as once a week.

Collins never purchases anything online, and he favors Bay Area artists, especially from his home county of Marin. He was a longtime board member of the Marin Museum of Contemporary Art, and he frequents local galleries as a regular pastime. He also buys art when he travels, or visits his second home in Santa Fe. He tries to meet each of the artists whose work he collects.

A new favorite is Marin artist Lark Calderon-Gomez, and Collins owns several of her large oil paintings of women, including “Accept My Existence, Expect My Restraint.” Completely different from her work, he also has a room dedicated to his Japanese magee bronzes, each more than 100 years old. This is again in complete contrast to a glass case housing multiple works of the highly collectible pottery of Erwin Winterhalder, mostly from the 1930s, alongside which hangs one of Winterhalder’s watercolors of redwood trees.

Serving as both art curator and caretaker on the property is Charles Roggow, who lives with his husband in an apartment on the ground floor of the chateau. Roggow is engaged in the overwhelming task of cataloging all the artwork. He met Collins at a gallery Roggow owned in Novato and was elated when he was invited to move into the Petaluma treasure. “Being an artist myself, it is wonderful to wander the house and enjoy the art. It is so quiet and beautiful here,” Roggow says.

Collins visits his gallery about once a week, often bringing along a new acquisition. He lives with his partner, Donna Morris, who frequently joins him at the chateau, and has two adult daughters who live in Texas. Collins and Morris occasionally entertain at the site, and private fundraisers for Marin MOCA and the Oakland Museum of Art have been held there.

Collins has a sculpture by the actor Anthony Quinn, a painting by famous San Francisco poet Lawrence Ferlinghetti, a guitar strap painted by rocker Carlos Santana, bronzes by Erté, and a portrait of a woman by Alex Katz.

Especially charming is a painting by an 11-year-old interpreting the work of Jackson Pollock that Collins purchased for $100. There are even pieces found in salvage yards.

He has never sold anything, and doesn’t intend to stop acquiring. “There’s still some room left,” he says of the building in which every inch of wall and floor space seems to display something.

As for the collection’s worth? “I don’t have any idea,” he says. 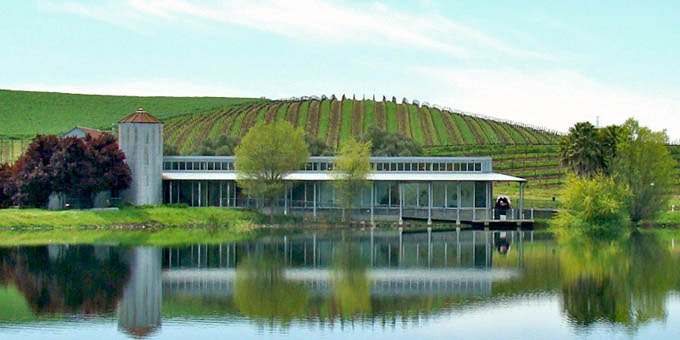