Working past typical retirement age, these Sonoma chefs still shine in the kitchen.

Standing beside a commercial soup pot that’s nearly as tall as she is, Evelyn Negri, 84, cackles a bit for effect when she sticks a giant paddle in for a quick stir. “I’m like a witch stirring her cauldron,” she says.

Every morning at 8, the matriarch and owner of Negri’s Italian Dinners & Joe’s Bar in Occidental starts her minestrone soup. It’s a century-old recipe she learned from her mother-in-law, Theresa, and one she’s cooked for more than 60 years. “I think I’ve got it right,” she says with a grin.

But that’s not all that’s stirring in the cavernous kitchens of the historic Italian restaurant in Sonoma’s west county.

On another early-morning visit, Negri stands in a frigid room where hundreds of ravioli are hand-rolled several times a week. It’s back-breaking manual labor, rolling 20-foot sheets of pasta in an ancient pasta machine, then slathering the sausage mixture to just the right depth, rolling out another 20-foot sheet of pasta and gently laying it on top. And then the real work begins. A giant rolling pin outfitted with dozens of ravioli-shaped squares is balanced with a 50-pound weight on each side. Straining to push the contraption down the table to cut the pasta, Negri’s staff ravioli-maker, Antonio, pants with the effort as each row is perforated.

“We used to do this every day,” says Negri, who began working at the restaurant in 1954 as a hostess and the new bride of Joe Negri. Back then, the family-run restaurant required everyone to do a little bit of everything, from plucking chickens and making soup to waiting tables and tending bar.

Now Evelyn Negri mostly just makes sure everything is getting done right, something she has no qualms about. After all, the restaurant has been a favorite old-school Italian destination for generations, and diners love the ravioli with Bolognese.

The octogenarian isn’t an anomaly in the local food and dining scene. Throughout the county are chefs, bakers, cooks and restaurant owners who are still going strong after age 65. In an occupation that’s notorious for long hours and hard physical labor, most kitchen folks are ready to retire after 20 or 30 years. But with steely commitment, wisdom and grit, folks like Negri are the keepers of traditions and institutional knowledge they’re passing down to second or third generations.

Negri’s daughter, Sandra, and her granddaughters Amanda and Tori also work at the restaurant, and it’s Amanda who is now heading up the revamped bar as well as a social media campaign for the restaurant. It’s something Negri would never have imagined when her late husband, Joe, ran the place. But like everything, Negri takes it all in stride, proud that a new generation of customers are coming to the restaurant.

Her secret for working well into her golden years? “As long as I feel good, I’m working,” she says with the kind of conviction you just don’t question. “I’ve put a lot of miles on this place,” she says, scurrying through the dining room to make sure things are shipshape in the kitchen.

For her part, Amanda Negri sees the restaurant benefiting in myriad ways every day from her grandmother’s many years in the business — and from what she lovingly refers to as Evelyn’s “old-school tendencies.”

“Working with Grandmother sometimes takes me back decades to the way things used to be at Negri’s,” Amanda says. “I have learned from her that it’s important to build relationships with your customers that for her have lasted many, many years. She brightens up the place with her wittiness. She has taught me to work hard, and I can only hope I am as much of a spitfire as she is when I’m 84.”

Again and again, as these kitchen elders share their stories, the same boot-strapping attitude emerges. They rise early, work hard and then get back to work again the next day, often outpacing co-workers a third their age. The difference between these would-be retirees and some of their contemporaries? They love what they do with a passion.

“I work 80 hours a week,” says Helen Pachynski, 72, the owner of Extreme Pizza restaurants in both Santa Rosa and Windsor.

Pachynski is typically up and working at her desk by 8 a.m., then heads to her restaurants by 10:30 a.m., making dough, picking up supplies and managing her staff.

“My 20-something-year-old workers ask ‘How do you do it?,’” she says in a soft, grandmotherly voice that belies her serious commitment to her business.

“I eat well, I sleep well and I dedicate myself,” says Pachynski. A former stockbroker, stand-up comedian and interior designer, she says she’s done just about everything except work as a volunteer fireman. But after becoming a widow, she needed something to fill her days.

“Attitude has a lot to do with it, a positive mental attitude,” she says. “Of course there are challenges, but I tell myself, this too shall pass and ask, what are we learning here?”

Art Ibleto, 90, wakes up at 5 each morning and is in his commercial kitchen by 6 making huge batches of soup, pasta sauce and gnocchi for his restaurant. By 7 a.m., his 12-hour day is well underway.

The beloved Pasta King of Sonoma County has been serving his pesto pasta, polenta and marinara at fairs, markets, parties and fundraisers for generations. His generosity is legendary, and the former World War II resistance fighter has kept his irrepressible spirit through countless challenges. Recalling one of his first jobs, Ibleto notes that he worked at a tallow factory rendering animal fat — what he calls “the worst job you could find” — often coming in on weekends and nights just to impress the bosses.

“I loved it because you have to realize that you’re stuck doing this job until you find something better. The secret is just to love what you’re doing and never watch the clock,” he says.

That means still working long hours that for most 90-year-olds would be unthinkable. After a full day in the kitchen, Ibleto heads to his Rohnert Park restaurant, Art’s Place, making sure things are running smoothly, chatting up the ladies and handing out $1 bills to well-mannered children.

“When I see these kids eating spaghetti, I know that things are gonna be okay,” he says. “They multiply.” And soon another generation is enjoying his food.

“There’s a lot of work to be done,” Ibleto adds. “They say I have to slow down, but I have no time to get old.”

Ibleto’s brother, Angelo, of Angelo’s Meats in Petaluma, has a similar work ethic at 82, getting up in the wee hours to make sausages. Both acknowledge one of their secrets to staying healthy: Not eating much food they don’t make themselves, and that results in a diet of plenty of vegetables, including garlic. “Garlic is the best medicine,” says Art.

Frank makes the donuts while you sleep.

Just past midnight, 87-year-old Frank Whigham and his wife, Champa, head to their Bennett Valley bakery, The Donut Cafe, to cook up hundreds of donuts, fritters, Danish and (best of all) cinnamon twists for the next morning.

It’s grueling work — the shop opens at 5 a.m. and the couple usually works until around 4 p.m., getting in a few hours’ sleep before starting the whole process again the next day. The payoff: Donuts so good even local cardiologists are known to come in for a few.

Whigham’s been in the business since he was 9, learning the trade in his uncle’s Georgia bakery. “I also learned to drive in Georgia,” he says with just a hint of his Southern twang. “My uncles were moonshiners.” In San Francisco, he joined the baker’s union (illegally) at 15, was busted and sent back to school, and eventually ended up with five bakeries in Daly City. If you get him going, he’ll gladly tell you about a lifetime of adventures — from playing with Confederate dollars as a kid to teaching donut making in Saudi Arabia.

In a place and time where sugary, glutenous, calorie-laden treats have almost become verboten, it’s refreshing to find a little corner of the world where old-fashioned morning pastries are still made — and accepted — with love. “I never get tired of donuts,” he says. “I still eat five or six a day.”

Maybe there’s something to enjoying a little sweetness in life — in moderation of course. You can ask the doctors walking out with a bear claw or jelly donut next time you’re there.

JOHN ASH, Age 75, Founder of Wine Country Cuisine and Educator
Though Ash is retired from the daily rigors of his namesake Santa Rosa restaurant, he continues a vigorous schedule of teaching about sustainable fish, cooking for events, writing cookbooks and co-hosting his weekly radio show, “The Good Food Hour.” Constantly in demand thanks to his role as creator and champion of the fresh, local farm-to-table food that we’ve come to expect in these parts, Ash never seems to slow down. His advice? “Eat simple fresh food and take a nap every day.”

EVELYN CHEATHAM, Age 60-plus, Executive Director, Worth Our Weight Culinary Apprentice Program
If there’s a patron saint of aspiring culinary talent in Sonoma County, it’s Worth Our Weight’s Evelyn Cheatham. The tireless chef who founded Santa Rosa’s training program (and restaurant) for at-risk kids in 2006 continues to be an inspiration to thousands of students who have graduated from WOW. “From 8 years old, the kitchen was a place of complete happiness to me. Who doesn’t want to get up in the morning and make something good to eat?” she says. “What keeps me going is the mission of giving kids a good step up, a helping hand, a role model, and making good food.”

CONDRA EASLEY and DEBBIE MORRIS, Ages 65 and 69, Owners of Patisserie Angelica
The sisters’ bakery has received national acclaim for their traditional cakes and pastries, all of which are GMO-free. The secret to their success? “There isn’t a secret; it is an overwhelming passion that I continue to have,” says Easley. “I have been in various aspects of the pastry arts for 40 years now. I’ll just keep going until I lose interest or get too tired! We are always proud of what we do. There is no middle ground for us.”

HANK MARIONI, Age 65, The Swiss Hotel
Working at a historical landmark that’s been in his family for four generations has a lot to do with why Marioni isn’t about to retire. Born and raised in the town of Sonoma, he says he loves to hear customers say that they remember when his grandparents or aunt and uncle ran the restaurant. A restaurateur most of his life, Marioni balances tradition and innovation at the 100-plus year-old institution. “We do what we need to keep up and grow,” he says. “Even though we’ve kept a lot of the old menu items, we try hard to do new things.”

FRANCESCA and JOHN VRATTOS, Ages 65 and 64, Owners of Yanni’s Sausage Grill
“There is a Greek word ‘philotimo’ which John and I live by, especially in our business. It means to do everything with honor. In other words, always do what is right. We never cut corners and we always stay consistent in the quality of our product and our customer service,” says Francesca. The couple are continuing to grow their Penngrove restaurant and sausage business. “We get seven hours sleep every night, take vitamins and eat healthy. We feel our age — it’s not just a number. But the hard work and the feeling of accomplishment at the end of the day makes it all worth it.” 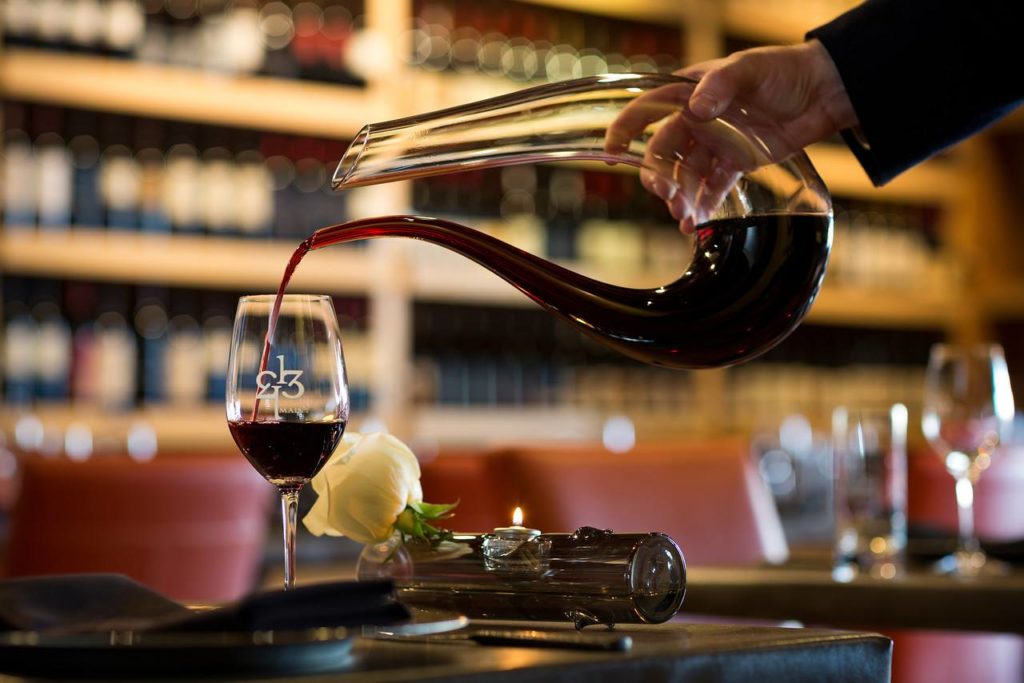 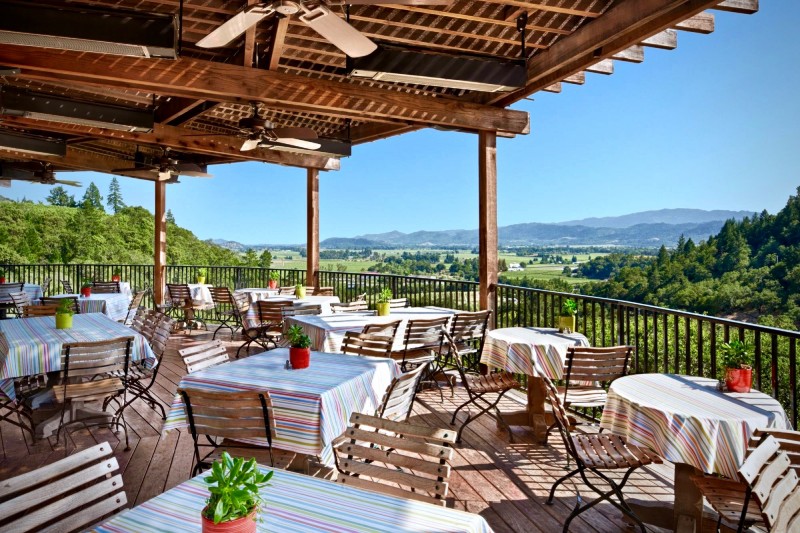 20 Best Restaurants with a View in Sonoma, Napa and Marin 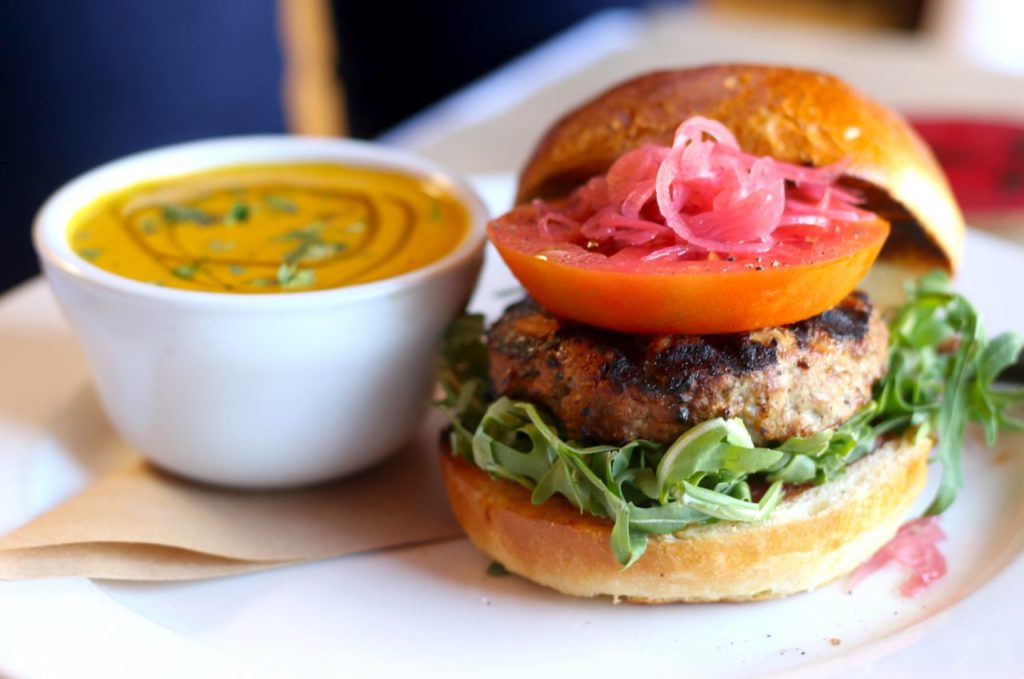 Hop on the train for food, wine, cocktails and live music.