Patrick Amiot, known in Sonoma County for transforming junk into distinctive, whimsical art, has had lots of people ask him to create custom pieces. But a man who approached him last year was different.

The Canadian didn’t request a sculpture of his wife or son or dog. He wanted a little fire truck that kids could ride at a convention center his company, the Remington Group, was building outside of Toronto. 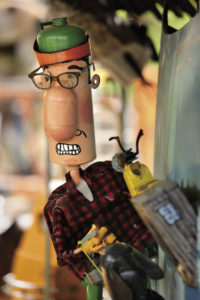 Amiot recalled the conversation: “I said, ‘A kiddie ride. Isn’t that kind of small for a convention center? Why don’t we do something bigger?’”

“Let’s do a carousel,” Amiot replied. He just threw it out there. A week later the developer gave the green light, and Amiot began creating a merry-go-round like no other.

The carousel, nearing completion, is 50 feet in diameter and has 44 sculpted metal figures to ride, among them: a gigantic beaver with buck teeth, a big gray dog, a bumblebee, a rabbit with huge curved ears and eyes made from old taillights, a moose, a school bus reading “ECOLIERS” in front, and a cow driving a pickup.

The carousel, named the Pride of Canada, is not just for looks: it goes up and down, round and round, thanks to solar power and a state-of-the-art motor. Amiot would only say that he will be paid “six figures” for the work.

The characters on the carousel reflect varied aspects of Canada. There’s a barrel going over Niagara Falls that’s accessible for the disabled, and each piece has a license plate from a Canadian province. Not coincidentally, the paint on each sculpture matches the color of its license plate.

Every piece is made from junk that would have been tossed into landfills. Amiot scours wrecking yards, flea markets and dumps to find rusted water tanks, old vacuum cleaners, spent fire extinguishers and other debris he fashions into art. 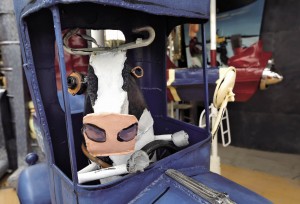 “They asked me if I can make drawings, and I just said no,” Amiot said about members of the Bratty family, owner of the Remington Group. “I took a big chance … because they could have turned around and said, ‘No drawings, no contract.’ But I think this gentleman believed in me enough to understand that I work with junk. I can seduce them with all sorts of pretty drawings, but the reality is it’s not going to look like the drawings.”

Friends and neighbors bring Amiot all sorts of treasures, such as old garden tools and car parts, which become incorporated into his work. He speaks rhapsodically about the objects, like hubcaps that “have their own spirit” because they’ve traveled hundreds of thousands of miles over scalding asphalt and winter prairies.

“Some people think I give new life to these objects, but I just extend their lives,” Amiot explained. “It just keeps going.”

A French Canadian, Amiot, 54, carved out a niche in eastern Canada by making clay figures, including hockey players. By 1997, he wanted to leave the Montreal area and move to the U.S.

Lured by images of Hollywood, Amiot and his family (his wife, Brigitte Laurent, and two daughters, then ages 5 and 7) drove a motor home in the summer of 1997 to Los Angeles, but decided it wasn’t for them. So they headed north.

“We stopped in Marin and they didn’t want my motor home anywhere,” he said. So they kept driving until they reached Sebastopol. Locals were friendly and welcoming; Amiot and Laurent sensed the place would be right for them.

The family enjoyed Sebastopol, but Amiot’s art wasn’t supporting them. His clay figures weren’t selling well in the U.S., and shipping them to galleries in Canada was costly, with import duties, breakage and an unfavorable exchange rate.

“I failed. I was pretty much going bankrupt,” Amiot said. “I just decided that if I was going down, I may as well go down with a bang, so let’s do something silly and crazy and outrageous because that’s what you’re supposed to do when you’re an artist.”

In early 2001, Amiot made a towering fisherman and put it in his front yard. He thought it might annoy his neighbors, but they loved it.

After the Twin Towers fell on 9/11, Amiot created a sculpture of a firefighter atop a box painted with American flags that went in a neighbor’s yard. Then just about everyone on Florence Avenue wanted a piece of Amiot’s art, and he obliged. The street turned into Amiot’s open-air exhibition space, as visitors came from near and far to see his fantastic creations.

Florence Avenue became the “opposite of a gated community,” Amiot said, a “people’s gallery” where anyone could come at any time and enjoy his art for free.

Laurent, his partner in life and art for more than three decades, has been painting Amiot’s sculptures since he started. 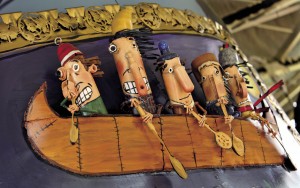 “If it wasn’t for Brigitte, I’d be selling used cars,” he said. “She’s more important than anything else in this whole thing.”

As Amiot’s star has risen, he’s continued to give back to the community.

After seeing kids sell candy bars to raise money for local schools, Amiot wanted to offer an alternative. He began publishing a calendar featuring his art that’s raised about $400,000 for schools in the past seven years.

He’s working with the Sebastopol Police Department on a 12-foot-high cat with amber streetlights for eyes that will implore speeding drivers to slow down in residential neighborhoods.

When he takes a moment to reflect, Amiot marvels at the trajectory of his life. He recalled that years ago, when the Barlow apple-canning factory in Sebastopol was closing, a foreman offered him some 4.5-inch lids. He grabbed a couple of boxes and thanked him, but the foreman said, “Oh no, all or nothing.”

So Amiot took more than 40,000 lids. He’s used them as scales on mermaids and fish, and now is putting them on owls he’s making for The Barlow, a constellation of restaurants, tasting rooms and shops on the former site of the cannery.

“They asked me to take this stuff off the Barlow lot, and now they’re paying me to put it back,” Amiot said. “Isn’t that great?”

A list of summer must-haves to help you squeeze just a little more fun out of the season.