The most beautiful woman in the world is looking at my sad, soggy state of rumpledness with judgment in her eyes.

Wine Country’s spring rains have turned into a torrent of misery that has frizzled my hair, turned my makeup into runny streaks of color and transformed my already-compromised running shoes into floppy sponges that squeak and squish with every step.

Fortunately, I’ve found a pair of fuzzy slippers in the detritus of my car, and slipped them onto my pruney feet. They refuse, however, to stay on my feet properly due to the fact they are two sizes too small.

From her perch at the Geyserville Gun Club, Sophia Loren watches my sad shuffle. My plastic soles smack on the floor like sarcastic applause, echoing through the nearly empty room.

With her kohl-rimmed eyes, the Italian actress watches me across an ocean of time where she is forever young, forever beautiful in a movie still of the 1955 Italian film, “Woman of the River.”

Right now, I am Woman of the Soggy Slippers, and I need a drink and a plate of lumpia, stat.

The Geyserville Gun Club is a Fellini-esque watering hole that’s almost too absurdly wonderful to be true. Brought to life by Chef Dino Bugica, it’s the flipside of his more tourist-friendly Diavola Pizzeria and Salumeria.

And by flipside, we mean a Pepto-pink bathroom with a stuffed ram’s head peering down at you while you do your business. Sophia, with her legs askew, gazes from an exposed brick wall overseeing the bar, a sort of Madonna of the Manhattan.

Smokey and the Bandit plays silently on a television screen while the Moody Blues croon from speakers.

It takes a minute for your eyes to adjust to the dim interior, with a backlit bar stocked with every artisan libation imaginable. A crystal elk antler chandelier illuminates the doorway, overseen by a taxidermy stag’s head that stares blankly into the room. Once used as an underground shooting range by boozy locals, the basement of the building is the inspiration for the name, according to chef-owner Dino Bugica.

The historic Odd Fellows building is conjoined to Bugica’s next door pizzeria/salumeria, Diavola, by a kitchen, the Gun Club is a combination bar, lounge and live music venue that’s been under the radar for several years — especially when it comes to the food. Located in the tiny hamlet of Geyserville, it’s an out-of-the-way spot that’s a favorite of late-nighters, afternoon-drinkers, pre-Diavola diners and local music junkies.

Billing itself as “a true working man’s bar,” at 1 p.m. on Friday, there are already a handful of day-drinkers snuggled up with their beers. The kitchen opens early today (most days the bar opens at 4 p.m.), and we’re ready to dig into what Bugica calls his “fetish cooking” from the Gun Club menu.

“The menu is everything I love to eat and cook,” he said in a text from Hong Kong, where he’s on a food adventure. That means an ever-changing menu that’s focused on Asian street food — from ramen and lumpia to spicy tuna hand rolls and nightly raw crudo that recently included live uni. They’re perfect foils for cheeky drinks like the Thai Fighter with Old Forester 100 Bourbon, gum syrup, black Thai Tea, Fernet Branca, allspice dram and sweetened condensed milk. Sweet and prickled with exotic spice, it’s and Thai iced tea’s complicated and brooding older brother.

Equally impish are dishes like the Tijuana dog, a hot dog stuffed with cheese, topped with bacon and jalapeno, pico de gallo and “secret sauce”. It’s also supposed to include fried onions and pickled pineapple, but ours didn’t, and frankly didn’t suffer to terribly for the omission. This is the dish Bugica could never get away with serving next door, where stricter codes of chefdom overrule bacon hot dogs, and why Bugica relishes the opportunity to play with his food at the Geyserville Gun Club.

And the pink bathroom? It’s an ode to grandmothers everywhere, who stubbornly held onto their 1950s pastel pink potties and matching sinks for far longer than they should have. Bless their hearts. “It’s your time when you go in the bathroom. You kind of get lost and feel a change,” said Bugica. That and he really likes pink toilets. “It was a fun project to design,” he said.

Overall: Expect serious bar bites that will lay a solid foundation for a long night of drinking. With chef-driven dishes, Geyserville Gun Club has plenty of secret sauce, paying homage to the average Joe, but keeping irreverence and absurdity on tap.

Lumpia, $12: Maybe the best lumpia ever, stuffed with meaty sausage and shrimp rather than too many veggies. Fried to perfection. Little bits of sliced veggies decorate the plate, and would be a delightful accompaniment if they were pickled.

GGC Burger, $14: I am a bit of a cretin when it comes to hamburger. I don’t love the slightly gamey flavor of some grassfed beef. I grew up in the Midwest where the poor cows only saw feedlots and corn.

This burger has an honest grassfed flavor, topped brilliantly with American cheese (so daring, so delicious!), caramelized onions and secret sauce. Next time, we’ll try it with the Impossible Burger, a vegetarian ground beef substitute.

Spicy Tuna Handroll, $8: What look like giant threads of saffron stick to spicy tuna in Japanese Kewpie mayo. If you like the salad-dressing style mayo, you’ll love this. If not, you’ll want to pass.

Egg fried rice, $ : Big chunks of pork, with homey stir-fried rice. Maybe a little too homey, because it lacked the smokey wok hay we like to see on fried rice. On the super plus side: Crunchy bits of bottom-of-the-pot rice were a surprising addition.

Next Time: Most of the crudos weren’t on the menu when we visited and dishes were very carne-centric. Previous menus have included a mezze plate, spicy Brussels sprouts and macro bowls. Bummed we couldn’t get the ramen at lunch, which is a Bugica staple. The good news is that the menu changes frequently, so you’ll always have something new to try. 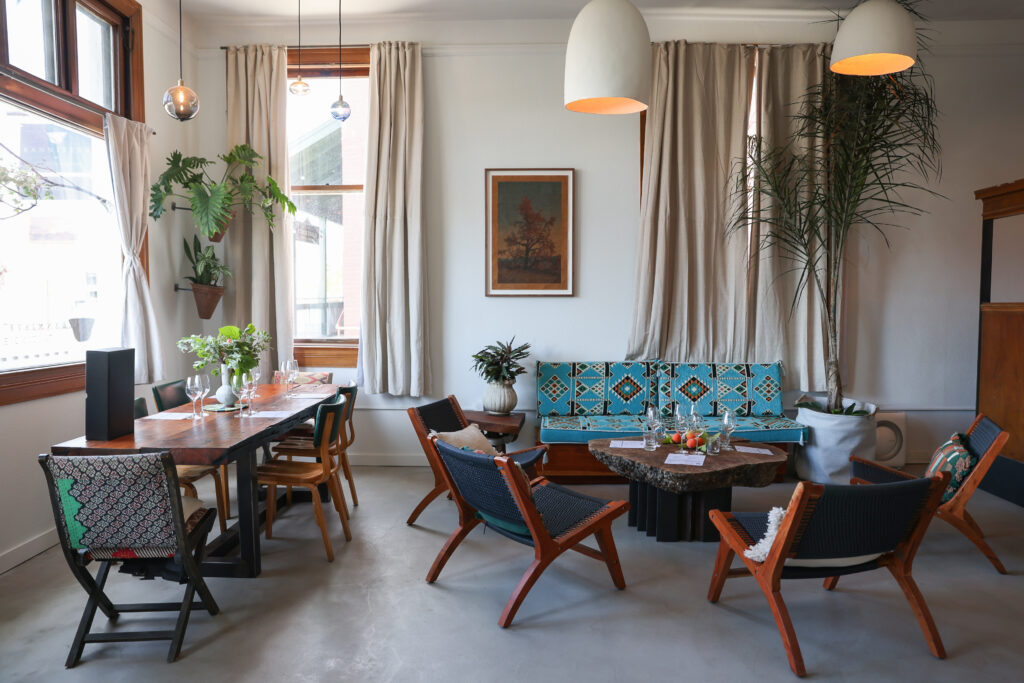 3 thoughts on “Geyserville Gun Club Has the Secret Sauce”

Cook Like a Pro at Home: 4 Sonoma Kitchen Stores

It makes sense that a place as "foodie-riffic" as Sonoma would have the tools to make magic out of the...