New Restaurants Are Opening Around Sonoma County Despite the Pandemic

How to Support Sonoma County Restaurants 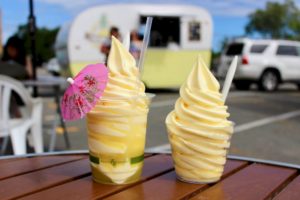 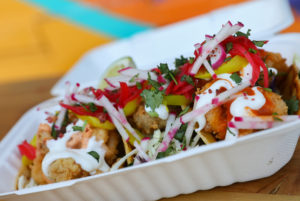 Check Out These Up-And-Coming Taco Trucks in Sonoma County

You know you’re doing something right when folks are lined up, willing to wait 20 minutes for a table on opening day. Not even opening day, according to El Coqui’s Tina Jackson. After months of waiting for the Mendocino Ave. Puerto Rican spot to open, friends and family began spilling into the restaurant last week for a few “preview dinners” — and once passersby saw the lights on, there wasn’t much Tina and her business partner (and cook) Jacqueline Roman, could do.
“We had a line out the door and around the corner. People were drinking beers at Ausiello’s waiting to get in,” says Jackson, buzzing from table to table. She never stops moving — greeting friends, seating eager diners and managing the crush of folks who want to eat. Now.
(If you missed the lead up to the opening, read the post and 60+ comments). Turns out the gals tapped into a local homesickness for Puerto Rican cuisine.
To start, check out the plantain chips with avocado dip (a play on chips and guacamole with a few secret ingredients), or fried green plantains topped with shrimp or beef. Entrees are same at lunch and dinner, but BiteClub was taken with the Palomilla Encebollado: thinly sliced steak covered with sauteed onions — but make sure to get sweet plantains on the side. Very traditional is the Pollo Al Horno, marinated chicken thighs with sweet peppers.  We also wolfed down a Sandwich de Bistec — a steak sandwich we ordered with smashed plantains and avocado. Yum.
BITECLUB FAVE: Canoas con Carne Molida, a whole sweet plantain stuffed with ground beef and smothered with cheese. Don’t overlook the bottle of Pique quietly sitting on your table. Here, it’s a mild vinegar sauce studded with garlic, peppers and other tasty herbs.
Desserts rotate, but you’ll want to try the Mantecado de Coco con Guineos Fritos, (coconut ice cream with fried bananas).
The food is flavorful and brightly seasoned without the searing heat of other Latin dishes.  Sides include red or black beans and rice, though what I love most about island food are the fried sweet and green plantains — a starchier cousin to the banana.
El Coqui does have a beer and wine license, but for something really exotic, try a Malta (sweet molasses) or Coco Rico (coconut soda). Those raised on the stuff swear by it, but it’s definitely an acquired taste.
The interior has been transformed into a funky, casual dining spot with bright neon beer signs in the window, a tile bar running almost the length of the restaurant and a handful of two and four-top tables. Don’t miss the portrait wall of famous Puerto Ricans as you walk in. As things settle down, expect more native dishes, some live music and (hopefully) a full bar. But until then, be content just to get a table.
El Coqui, open for lunch and dinner daily, 400 Mendocino Ave., Santa Rosa, 707.542.8868.

Vote for our farmer’s markets!

After seeing Food, Inc. on Friday night (and feeling upset and queasy through the whole thing), figured a good way...