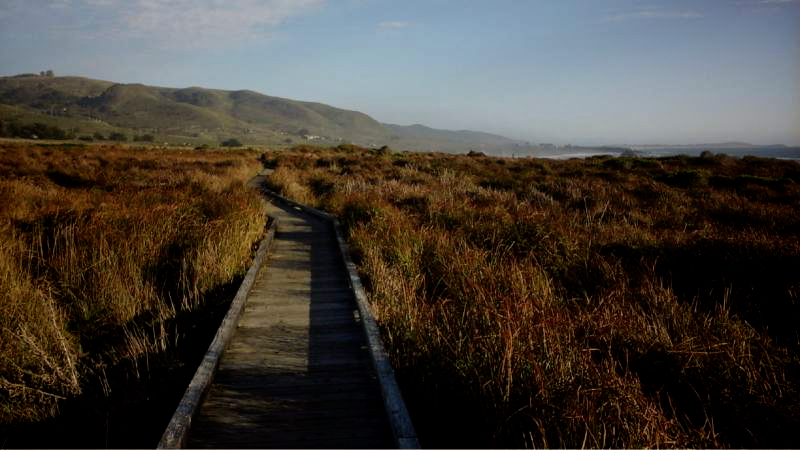 Not all trail outings require specialized gear, long time commitments or strong legs and lungs. Along the Kortum Trail on Sonoma County’s coast, feel free to come as you are, saunter at will and make frequent stops.

The only climbing will be an optional side trip down to the beach or up the trailside rock outcroppings. Along the way, you’ll meet people of all ages who have pulled over for a closer look at the coastal bluffs so many of us drive past on our way elsewhere.

We visited on a sunny Saturday afternoon and spent an hour watching the surf at Blind Beach near Jenner before wandering down to the trailhead. During a leisurely stroll to Shell Beach, we passed no more than 20 others, many of whom were likewise in no hurry to reach the end of the trail. Several of us gathered to watch a group of young rock climbers practice their ascents on Sunset Rocks, one of the many trailside attractions. 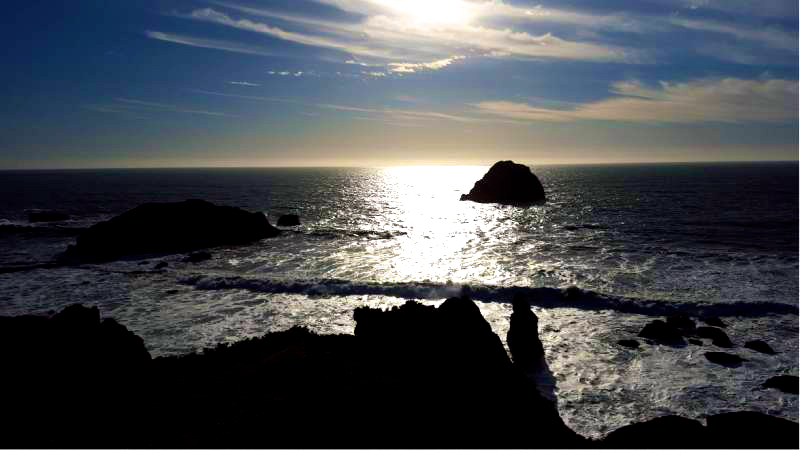 There’s plenty more to enjoy along the way. From the coastal bluffs, we had panoramic ocean views that stretched from Goat Rock to Point Reyes. We found many reasons to linger — scouting the horizon for cargo ships, watching the waves wrap around craggy outcroppings, searching for wildlife in the marshland beneath the boardwalk.

The trail is named for Bill Kortum, a Petaluma environmental activist who, among other things, co-founded Coastwalk California. Until his death in 2014, he continued to advocate for the statewide California Coastal Trail, of which the Kortum Trail is a segment. Although the entire trail is visible from Highway 1, we felt miles away, separated by gentle breezes and the ever present roar of the Pacific.

(Dogs are not allowed on the Kortum Trail) 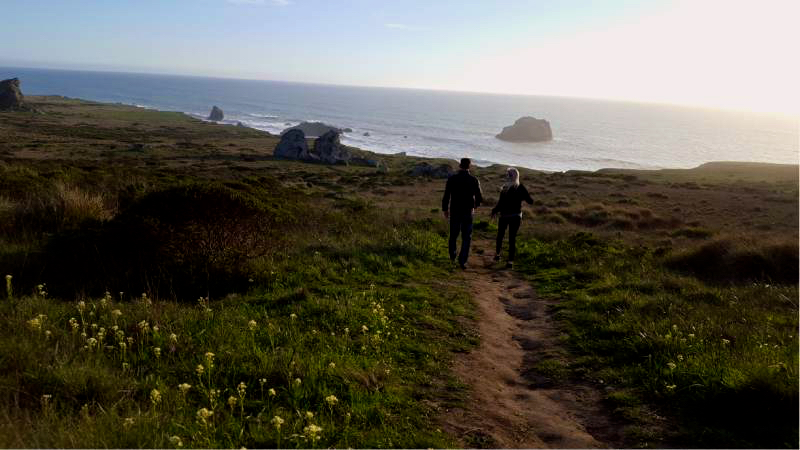 From Highway 1 and Highway 116 (just south of Jenner) cross the Russian River bridge on Highway 1, and drive 0.65 miles south to Goat Rock Road at mile marker 19.15. Turn right and continue 0.75 miles to the Blind Beach parking lot on the left side of the high bluffs.

From Bodega Bay, drive 8 miles north on Highway 1 to Goat Rock Road at mile marker 19.15. Turn left and continue 0.75 miles to the Blind Beach parking lot on the left.

To Wright’s Beach: The lot is located 1.4 miles south of the Shell Beach turnoff at mile marker 16.8 along Highway 1. 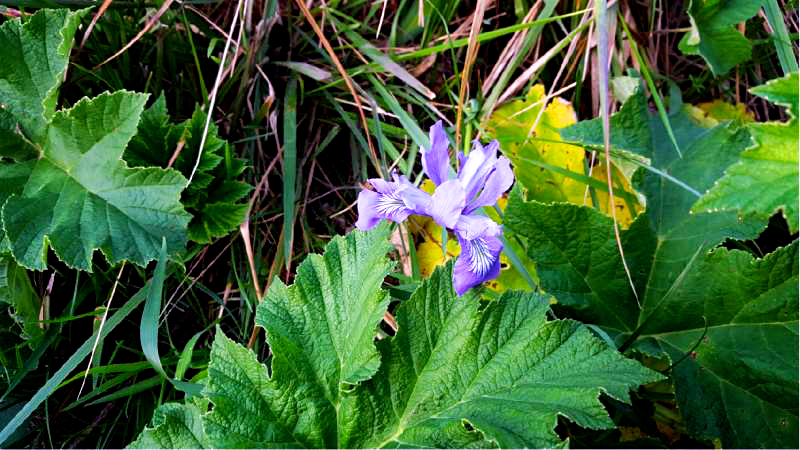 Get a great bird’s-eye view of Goat Rock and Blind Beach from the Blind Beach parking lot. A steep, rough path descends the cliffs to the beach itself, 200 feet below, but for this hike, walk 30 yards back down the road to the posted Kortum Trail on the right. Ascend the grassy slope toward prominent Peaked Hill.

Climb to the saddle between the 377-foot peak on the right and the rocky outcrop on the left. From the ridge, the southern views stretch past Bodega Head to Point Reyes. Descend the southeast slope, and pass through a fence to a giant rock formation on the marine terrace.

Curve right to the oceanfront cliffs and continue south. Pass dramatic formations on the grassy bluffs and offshore rocks, including Gull Rock, a nesting site for gulls and cormorants. Cross a small gully and continue atop the plateau. Cross a larger gully with the aid of stairs and a footbridge. Follow a 300-foot boardwalk over a wetland. 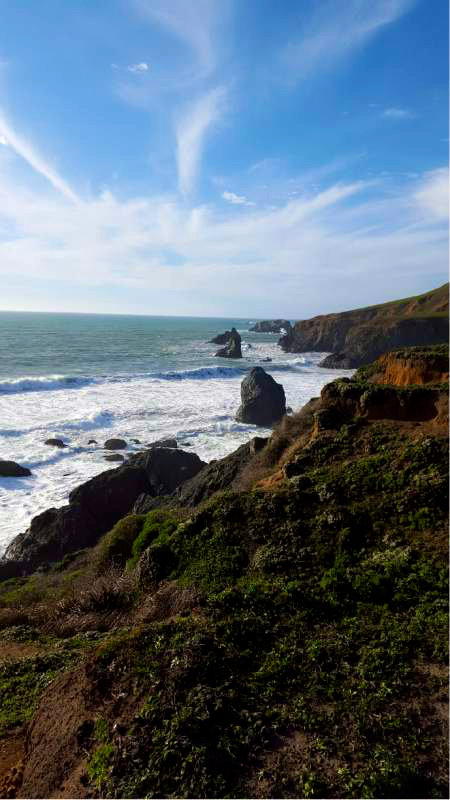 Curve inland, walk across another 150-foot boardwalk, and return to the oceanfront cliffs. Pass through a fence and continue on a gravel path to the Shell Beach parking lot. A path on the right descends the bluffs to the beach, where jagged shoreline rocks support tidepools. After exploring the beach, return along the same route for a 4.6-mile out-and-back hike or continue south another 1.6 miles to Wright’s Beach for a total of 4 miles.

If you are continuing, take the posted Kortum Trail south. Weave down into a stream-fed drainage, and cross a footbridge over the first of five seasonal creeks. Climb out of the gully to the coastal terrace and the oceanfront cliffs at an overlook of Shell Beach and the dramatic offshore rocks.

Follow the edge of the bluffs and curve inland. Drop into a second drainage and cross the bridge over the ephemeral stream. Return to the bluffs, with views of Red Hill and the sandy beach at the mouth of Furlong Gulch. Zigzag down switchbacks into the gulch. Cross another bridge over the creek and a shorter bridge over a feeder stream. After the second bridge is a junction. The right fork descends steps to Furlong Gulch Beach on the south edge of the creek.

Climb back up to the 100-foot bluffs and continue south. Atop the terrace, pass a connecting trail from Grill Way. Curve left toward the house near the end of Carlevaro Way. Before reaching the house, veer to the right, staying on the trail. Drop down and cross a bridge over the fourth stream to a posted junction. Straight ahead, the right path leads to a sandy beach at the mouth of the stream.

At low tide, this route can be taken to Wright’s Beach, forming a loop with the bluff-top trail. The main trail curves left and weaves across the bluffs, crossing a bridge over a winter stream near Highway 1. Follow the south wall of the drainage and return to the oceanfront, where the path joins a gravel utility road. The gravel ends at the paved access road leading down to Wright’s Beach and the campground. Wind a quarter mile down the access road to the sandy beach.

One of Mexico’s most well-known celebrities, Gabriel Soto, has spent the last few weeks in Sonoma Valley filming a highly...