Sonoma County has long been a hub for organic farming. Organic and biodynamic wineries may get the most attention, but the lineup of organic products grown and made here is long and varied. Think about your last trip to the farmers market or the grocery store — from olive oil, fruits and vegetables to milk, eggs, honey and just about everything in between, locally made organic products are easier to find than ever. And now you can add organic craft spirits to the list.

Healdsburg’s Young & Yonder Spirits recently completed the process of becoming a United States Department of Agriculture (USDA) organic craft distillery. Founded in 2013 by wife-and-husband team Sarah and Joshua Opatz, the distillery has sourced quality organic ingredients for its spirits since day one. But after watching the marketplace and listening to their customers, the couple decided it was time to make the leap and seek official organic certification.

“Going organic was a decision that we made from the commitment to push ourselves to be better at what we do,” said Joshua Opatz. “It also has very little downside. If consumers don’t find that aspect of our product valuable, it doesn’t deter them from still enjoying the product all the same.” 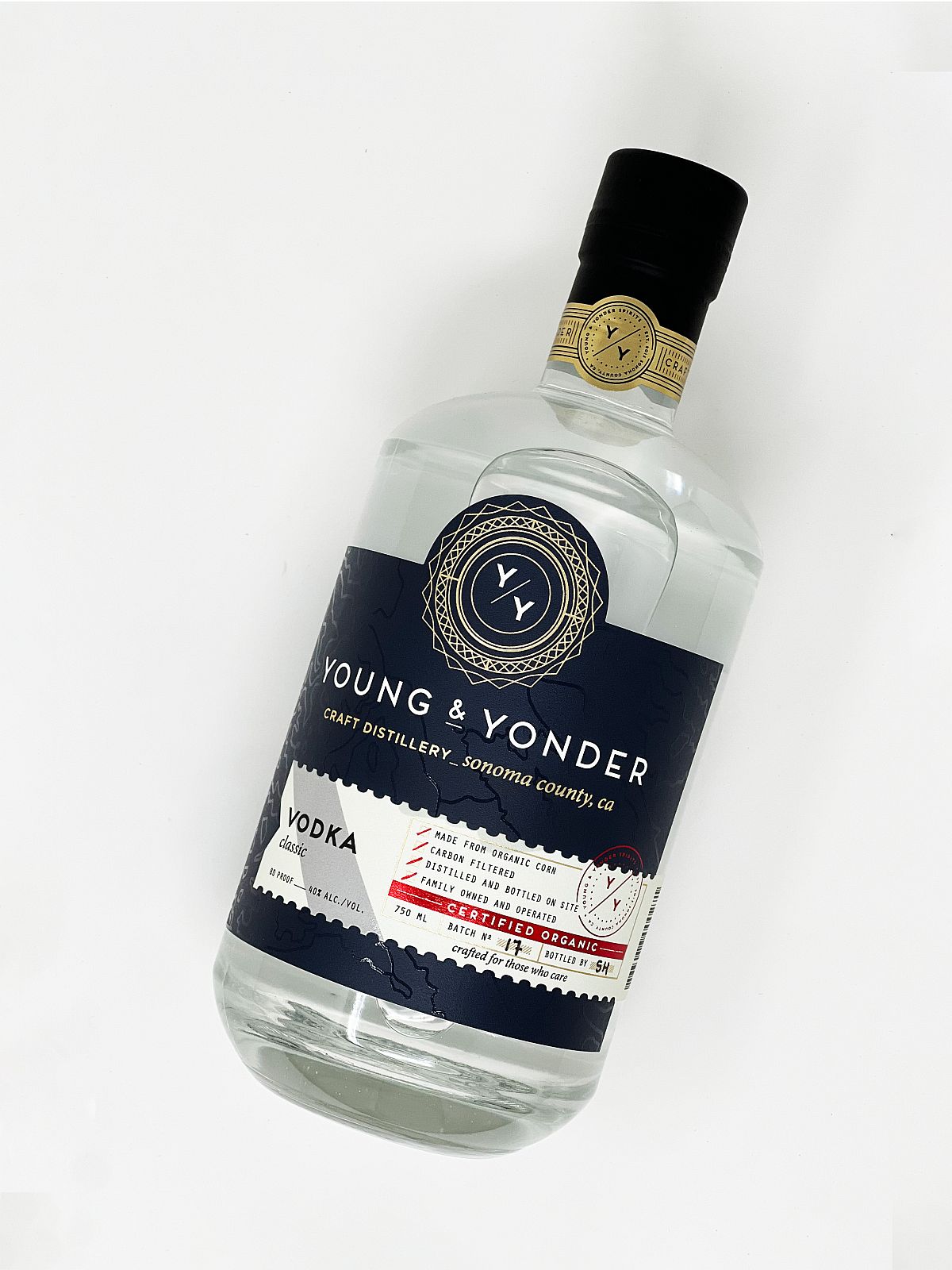 Organic products are in high demand. As a result, the word “organic” is widely used to market a variety of goods. This can make it complicated and confusing for consumers as they try to interpret labels and make choices in the store and, sometimes, organic labels can be misleading. USDA certified organic products, however, have an official stamp of approval since these products must be grown and processed according to certain federal regulations and standards. These regulations and standards address a variety of factors, including soil quality, pest and weed control and the use of additives.

To receive USDA organic certification takes time and and requires quite a bit of effort. For Young & Yonder, it took about a year and the process included a variety of steps such as evolving the supply chain, locating reliable partners, securing proper paperwork and redesigning labels.

“From a cost perspective, it was expensive,” said Joshua Opatz, who noted that the cost can deter business owners from seeking USDA organic certification. But it also “elevates the entire operation to a more traceable, cleaner, product-focused environment,” he added.

Once a rarity in the artisan distillery world, organic spirits are becoming increasingly popular. The majority of Sonoma County’s distilleries use organic ingredients in their spirits but Young & Yonder is only the second to complete the USDA certification process.

Hanson of Sonoma, an industry standout for making vodka from grapes instead of grains or potatoes, launched in 2015 with an organic vodka. Owned and operated by four siblings and their parents, the distillery now produces a variety of vodkas that are all certified organic, from the Original to the flavored Habanero, Cucumber, Meyer Lemon, Mandarin and Ginger.

“It’s very transparent being an organic product,” said co-owner Alanna Hanson. “In the spirits world, where ingredients aren’t even listed on the label, being organic is one of the few ways to really have some credibility in the product and the juice that goes in the bottle.”

Distilleries and the spirits they produce are certified individually. In other words, an organic distillery can still produce a conventional, non-organic product alongside organic ones. In addition to its organic grape-based vodkas, Hanson of Sonoma also produces a single malt, double barrel whiskey that is not organic.

Young & Yonder crafts a variety of spirits, including vodka, gin, absinthe, amaro and whiskey. All spirits are certified organic apart from the three whiskeys they produce. (The Opatzes weren’t able to find local, organic grains they felt delivered the quality, aroma and taste they wanted for their whiskeys and instead opted to source non-GMO grains from local producers.)

If the demand for organic spirits continues to grow, the availability of local organic ingredients will likely increase, too. This is a win-win for local distilleries, local farmers and for those of us who like to enjoy spirits made in Sonoma County.

With the help of dozens of foodie Facebook fans and readers, we've come up with a list of favorite burrito...