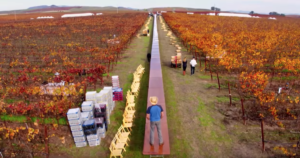 ‘Uncrushable’ is Painful to Watch, But A Heartfelt Love Letter to Wine Country

If there’s one guy who knows how to make an entrance, it’s Santa. Whether it’s stealth-style through a chimney or via a reindeer-pulled flying sleigh, his arrival never fails to impress. In Wine Country, he takes it up a notch with different modes of transportation: tractor, boat, train — even helicopter! Click through the gallery to find out where to see Santa in Sonoma, Napa and Marin counties this December. Let us know in the comments if we missed (a public) appearance.

It's finally here: your guide to the best Sonoma County wines and wineries.