Michaela Rodeno and Julie Williams were mothers of young children and busy wine professionals in Napa Valley in the early 1990s. When their kids started coming home from school with anti-drug pamphlets equating wine with heroin, they knew something had to be done.

“This caused considerable confusion in households where wine on the dinner table was customary,” recalled Rodeno, who at the time was CEO of St. Supéry Estate Vineyards & Winery in Rutherford. Her children wondered, “Why are you making drugs?”

“They were curious,” she said. “In our household, we simply replied, ‘We’re not making drugs,’ and they were satisfied.”

But there was a neo-Prohibitionist movement afoot, and the anti-alcohol furor landed hard on women, particularly when it came to pregnancy, Rodeno said. It bothered her, and she soon found a kindred spirit in Williams (now Johnson), then co-owner of Frog’s Leap Winery in Rutherford. Both believed there was nothing wrong with wine consumption in moderation, and they wanted to work to counter the anti-wine hysteria of the times.

They founded Women for WineSense for that purpose, and 25 years later, the organization will celebrate its silver anniversary at its national conference April 30-May 2 in Napa.

“We were dreaming about what if one of us was to sit down and tell it like it really is?” Johnson said. “Could any of us sit down and hold our own in a discussion against the specific attack against women, against wine, against women with a family? And the answer was yes, and that’s what we proceeded to do.”

Their collective energy now focused, the group devoted itself to a “mantra of moderation,” as Rodeno would call it, dedicated to spreading the word on wine’s health benefits, using solid but then little-publicized scientific research as backing.

Hundreds of pages of studies were copied (pre-Internet) for distribution, while letter-writing campaigns and visits to Washington, D.C., promoted the message that healthy wine consumption was possible.

“The public debate at the time was one of extremes,” Rodeno said. “Laissez-faire libertarians battled with media-savvy anti-alcohol forces, with no one speaking up on behalf of the moderate middle.”

The efforts led to a 1991 cover story in the trade magazine Vineyard & Winery Management, which drummed up more support and a $10,000 donation from Marvin Shanken of Wine Spectator magazine. It was such a generous offer that when Shanken told Rodeno of it, she said she almost fell off a bench.

A Portland, Ore., chapter launched in 1992, followed soon by groups in New York City, Seattle and Rochester, N.Y. Then, in 2001, Morley Safer interviewed French researcher Dr. Serge Renaud for a segment of the “60 Minutes” TV show and unveiled the principles of what would become known as the “French Paradox.” Fundamentally, Renaud’s research had shown that the French people’s ability to enjoy rich and some would say unhealthy foods, and live longer on average than Americans, was thanks to their moderate consumption of red wine.

With that, Women for WineSense began to shift its focus away from battling legislation meant to scare people away from wine and evolve into what it is today: a way for people (men are welcome, too) interested in wine to learn more about it and to find others who share their enthusiasm.

Chapters continue to open across the country, with the founding Napa/Sonoma chapter robust at 300-plus members, many of whom work in the wine industry. In 2004, the organization launched what are now popular professional roundtables.

It continues to draw new faces. A few years ago, Jonjie Lockman moved to Sonoma from Atlanta for a wine marketing job and started looking for professional organizations to help her make new friends and learn more about wine. She happened across a Women for WineSense poster in her office and was intrigued.

“I made a bold decision to attend the next upcoming event, alone,” she remembered. “Despite my dread of making small talk with strangers, I made friends right away. I love what it’s all about, connecting people who share a passion so they can learn from one another, support one another and thrive.”

The experience was so positive that Lockman is now the national president of Women for WineSense, a volunteer position. 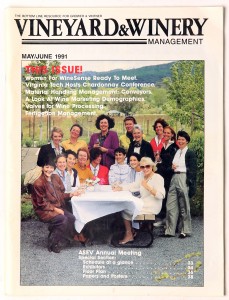 The group’s mission statement stems from a belief that wine enhances and enriches everyday life. It also promotes the appreciation and responsible enjoyment of wine, as well as supporting the success and professional development of women in wine and associated
industries.

Women for WineSense’s 2015 Grand Event and 25th Anniversary Celebration includes visits to wineries and vineyards, educational sessions about food and wine at the Culinary Institute of America in St. Helena, and keynote speeches by Rodeno and Johnson.

Shopping: Put Spring in Your Step

Shake off winter with this spring weather finds.