The Seghesios simply wanted to preserve family traditions, offering VIP visitors to their Healdsburg winery tastes of a cured salami they produced from recipes brought from the old country when the family emigrated from Italy in 1886.

Then in the summer of 2011, Seghesio Family Vineyards ran into modern health regulations.

It turns out that the state requires a mind-bogglingly detailed plan for producing meat, spelling out exactly where and how every scrap will be handled. It’s either that or find a U.S. Department of Agriculture-approved facility to do it for you, and there isn’t one of those anywhere near the winery.

So former CEO Pete Seghesio, the third generation of the family in Sonoma, decided to shift his focus from grapes to building a state-of-the-art facility to produce the family recipes and help other artisan meat producers make their products without running afoul of health inspectors.

“It’s really about trying to preserve family traditions but make (them) marketable and saleable in a modern marketplace, and to do that, you’ve got to be USDA-certified; you’ve got to be willing to invest to be able to do it,” said Seghesio as he stood on the unfinished second floor of the building in Healdsburg that he hopes to open later this year.

The family sold the winery in 2011, and Seghesio decided to invest a considerable sum (he declined to say how much) to build a gleaming new facility to be called the Healdsburg Meat Co. The building is located north of Healdsburg’s plaza, at the site of the post office that burned down in 2010. The investment will allow him to produce and sell to the public cured meats, a process that by law must be done under the watchful and pervasive eye of USDA inspectors.

His story isn’t unusual. Artisan food and beverage producers often run up against regulations that are out of date or designed for huge industrial operations rather than cottage industries. From meat producers to salsa makers, from small farmers to makers of spirits and ciders, the details of local, state and federal regulations can shape the way they do business, or put an end to it entirely.

Evan Wiig, founder of agriculture networking site The Farmers Guild, learned this a year ago when he and some business partners tried to produce hams in the style of prosciutto, speck and Iberico, from livestock raised on their small farm near Valley Ford. After a few delicious experiments shared with friends and family, they began to look into the regulations for selling their products to the public.

That stopped the project cold. Before Wiig and his partners even broke ground, the costs of making their own cured ham at the farm near the Sonoma-Marin county line began to spiral insanely out of control.

Seghesio’s planned business will feature a café and butcher counter that sells locally sourced meat products. But the heart of the operation will be completely outside public view: the tightly regulated workshop where carcasses will be broken down and processed into chops, sausages and salumi. Temperature will be precisely controlled, access sharply limited, sanitation rigorously enforced. A regional USDA inspector will have full access to the facility during operating hours, and the business must maintain an office onsite for the inspector’s exclusive use.

“It costs a lot, it’s a lot; the USDA portion, it’s pretty prohibitive,” Seghesio said. “That’s why you see all the USDA facilities are large, large, large facilities.”

Meat isn’t the only artisan product that runs into regulatory obstacles.

Sonoma County cider makers Ellen Cavalli and Scott Heath ran into roadblocks with the Alcohol and Tobacco Tax and Trade Bureau (TTB), a division of the Treasury Department.

They want to reintroduce Americans to apple-based cider, once a common drink in Colonial homes, but since Prohibition a nearly extinct art form. Their Tilted Shed Ciderworks near Forestville is part of a small but rapidly expanding renaissance in the artisan cider world.

Heath wants to explore a small specialty form of cider known as New England style. Colonial cider makers in the icy Northeastern states would try to preserve barrels of fall cider through the long winter by adding molasses to boost the alcohol level and sprinkling in raisins to promote a slow, steady fermentation that covers the surface cider in a protective blanket of carbon dioxide.

“There are New England ciders that are really beautiful, these little touches of molasses, vanilla things, other flavor profiles that come out with it that are really special,” Cavalli explained. Yet the TTB, which is primarily responsible for collecting taxes on alcoholic beverages, also exerts tight control over the naming and labeling of wine, beer, cider and spirits. As far as the feds are concerned, what Tilted Shed wants to produce and sell isn’t cider at all. By adding raisins, Cavalli said, the beverage would have to be called something like “apple wine with spices and other natural flavoring.”

“That just sounds like you’re making crap,” she said. “There’s no credibility to that kind of thing, so we’re not going to do it.”

For small-batch liquor distilleries, meanwhile, the problem isn’t tax officials, but rather state laws that block their ability to get their products to the consumer. California distillers do not have the right to sell their goods directly to consumers, as breweries, wineries and cideries do. That means they have to rely exclusively on the wholesaler middlemen to get their spirits into stores, bars and restaurants.

A wholesaler is under no obligation to carry small-batch products, so distillers can’t afford to take the risk of producing something odd or innovative, for fear they would be stuck with hundreds of gallons of liquor they can’t sell, according to Timo Marshall, co-founder of artisan distillery Spirit Works in Sebastopol.

“Say we wanted to do one barrel in a very particular way,” he explained. “We may finish it in a different cask or in a particular way; we may blend two of our whiskies together to get a particular flavor. That’s the kind of thing that happens all the time in the wine and beer world, where producers can test the market by selling experiments and mistakes directly to the public.”

Distillers, however, “literally cannot sell that product, because they can’t find a distributor willing to take on that product,” he said.

Spirits producers won a small victory in the California legislature in 2013, gaining the right to offer tastings at their facilities, but their campaign to allow direct sales to the public died when it ran into stiff resistance from distributors.

Other artisan industries have been more successful. The Bale Grist Mill in Napa Valley, for example, is likely to be partially exempted from state and local health regulations by the state Legislature this year, freeing it to sell its flour and corn products ground on the huge grindstones powered by a towering waterwheel. 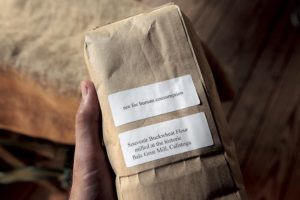 The mill ran afoul of local health regulations in 2008 when inspectors found that the newly restored mill did not meet modern health codes for factories producing flour and similar products. The mill, built in 1846, could not be completely sealed against wildlife such as bats and mice, and the wooden structure would have to be modified with floors, counters and other surfaces that are deemed impervious and washable.

Since then, the mill has operated under an awkward compromise in which it gives its flours away in 1-pound bags, with a $5 donation requested. Bags must be stamped, “not for human consumption,” although humans do consume the products with no reported illnesses or injuries, according to the Napa County Regional Park and Open Space District, which operates the mill.

State Sen. Lois Wolk, D-Davis, is pushing a bill that would create an exemption for such historic mills (the Bale Grist Mill is the only one in the state, as it turns out). Her bill had been headed for easy passage in the 2013 session, but was stalled at the last minute when the state Department of Health asked for some changes. Wolk said she does not anticipate any difficulty reviving the bill and allowing the mill to sell its ground grains legally.

Home cooks scored a partial victory in 2012 when the legislature passed the California Homemade Food Act, permitting home producers to sell a wide variety of products directly to the public without having to rent space in a commercial kitchen, an expensive proposition. That opened up farmers markets and other venues to sell home-baked breads and tortillas, candies, jams and jellies, pasta and home-roasted coffee. But the act left untouched the ban on items considered hazardous if mishandled in production, including cured meat, cheese, pies or pastries that require refrigeration, pickles and anything based on tomatoes. The tomato ban alone cut out the potentially large market for homemade pasta sauces and salsas.

In some cases, regulation seems to be getting more stringent. Small farmers nationwide are nervously eyeing a new set of regulations proposed by the federal government after a 2006 E. coli outbreak in bagged spinach, and set to go into effect in 2015. Those rules dramatically tighten limits on the use of manure and compost, compel stricter water treatment for irrigation and washing, and require farmers to block wildlife of several kinds from the fields.

In a recent round of comments on the proposal, small and organic farmers warned that the regulations would be prohibitively expensive and undermine organic and eco-friendly traditional practices. They hope the Food and Drug Administration will relax the rules or carve out exemptions for very small growers.

Modern regulations tend to be tailored for large-scale production facilities, which have deeper pockets and can offset extra cost with greater efficiency. That leaves the little guys struggling to find a way to live with rules drafted without them in mind.

“We have a very good food safety system in this county, but it is large and industrial, and the cost to play in that game, it forces people to be very large,” Seghesio said. “And when you’re very large, you lose your creativity.”

Early harvests yield wonderful meals to celebrate the warmer days and nights of the season.