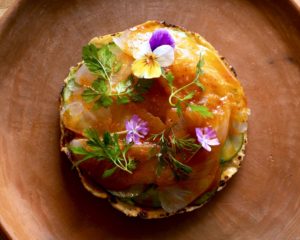 La Calenda is a casual trip to Oaxaca via tiny Yountville.

Whether or not, quite a few of us would would, because the cookbook in question - Modernist Cuisine, by Nathan Myhrvold, Chris Young, and Maxime Bilet - already sold out its initial printing, and it hasn't even hit the shelves yet! Moreover, despite the fact that virtually nobody on Planet Earth has actually touched the 6-volume, 2400-page opus, it's already been called "the most important cookbook ever", inducted into the Cookbook Hall of Fame, and generated uncountable words in the foodie blogosphere, including tweets by Thomas Keller and just about every other important chef you can think of.

I've been thinking about cooking green. And no, I'm not pandering to my more aggressively environmentalist brethren, I'm talking about the color green, the shades of which the human eye is more sensitive to than any other part of the visible spectrum: The haughty, peacock green of my grandmother's emerald broach; the brooding, mossy green of the Russian River pooling under Wohler Bridge...

Every once in a while, I'm lucky enough to find a combination of flavors that just works, a minor chord born of a Beatles-like marriage of flats and sharps. Many of the classics never tire, and I use and re-use them without apology - and then there are beer snacks, the holy grail of sports fans and wannabe man-cooks everywhere, the perfect balance of heat, salt, and icy bitter froth, a marriage to read about in the self-therapy section of an airport book nook.

Ad Hoc: Though the restaurant was only supposed to be a temporary experiment, Thomas Keller's home-style prix-fix diner has settled in for the long haul.