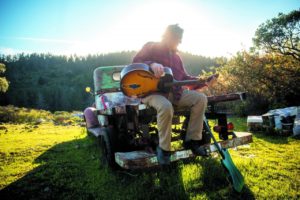 Sonoma People, What's New in Wine Country
His birth name is Sam, though he won’t divulge his last name and wants the world to call him Fat Dog, a nickname given to him by his mother. He doesn’t want the exact location of his home and recording studio revealed, though it’s somewhere above Sonoma Valley. Fat Dog, 68, has never married, doesn’t […]