Long before iPhones and food bloggers and digital cameras that can make almost anyone a culinary documentarian, Art Culinaire magazine was the first and last word in food. Introducing the world to the greatest chefs, the most state-of-the-art kitchens and, of course, the latest trends and recipes in haute cuisine, and with spectacular photography, Art Culinaire was — and is — a magazine coveted by chefs and gourmands.

Wolfgang Puck was in the first issue, long before he became a household name and celebrity chef. Renowned French Laundry chef Thomas Keller is rumored to have almost every issue of the hard-bound magazine, published since 1986. 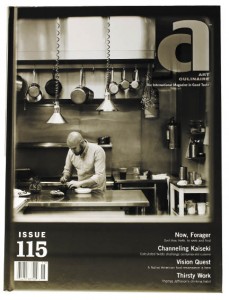 But few people know that the magazine, subtitled the International Magazine in Good Taste (it’s shipped to 57 countries) makes its home in Healdsburg, quietly published by the wife-and-husband team Carol M. Newman and Lars Ryssdal. They took over the publication in May 2014 from founder and friend Franz Mitterer, described by Ryssdal as an Austrian gourmet who envisioned a magazine that honored chefs and their food.

What makes it stand out in a flurry of digital food magazines, however, are its decidedly old-school ways: It’s printed as an oversized book on heavy gloss paper and with almost no advertising.

“It’s like a vinyl record. There isn’t an online component and you keep it forever,” Ryssdal said. “We think about the legacy of chefs and their food. This is the only way to really honor a dish that a chef creates, with giant photos that show every detail.”

U.S. subscriptions to Art Culinaire are $68 for four issues a year, and can be purchased at artculinairemagazine.com or by calling
707-595-3850. Visit the website to see what’s featured in the current issue.