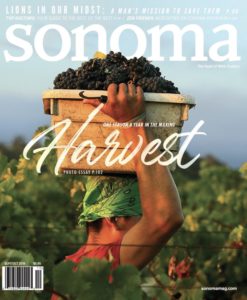 Hollie Greene and Jeff Rottman exchanged wedding vows in a hot air balloon in 2011, and every year since they set a lofty theme for their married life. In 2015 it was “The Year We’ll Take Risks,” leading them to buy 6 acres of rugged hillside above Sonoma Valley and launch a plan to leave their San Francisco life.

“We intended to be easy on the land and have a light footprint, leaving everything as natural as possible,” Rottman says. “We used basically raw materials.” Greene explains that they favor contemporary architecture with clean lines, yet shy away from anything stark or unwelcoming. “We wanted the house to have a sense of humor,” Greene says. “Modern houses can be so serious. We like simplicity, but we also wanted warmth.”

The couple turned to architect Casper Mork-Ulnes, who designed the home with a thrice-peaked roof topping three distinct living areas below. The layout features a kitchen and dining area that opens to a covered patio for alfresco entertaining, a central living area that includes two bedrooms and shared bath, and at the far end of the narrow home the couple’s private master suite — with an adjoining deck overlooking dense oak woodlands.

Built by Neema Construction Company, the earthy structure is made primarily of Cor-Ten steel, which rusts to a natural hue, and rough-hewn concrete. Large swaths of glass frame the miles-long view that stretches to Mount Tamalpais in Marin. The home is impervious to pests, and more important in its wildland location, extremely fire resistant.

Greene is a professional chef and holds a management position with Wellness in the Schools, a nonprofit focused on creating healthy, delicious, and affordable meals for children. Rottman heads up the global diversity and inclusion program for Roche Pharmaceuticals, and travels frequently to Roche’s headquarters in Switzerland. He is passionate about his role as board chairman of the Ceres Project, a nonprofit that provides organic locally produced meals for Sonoma County residents struggling with illness. 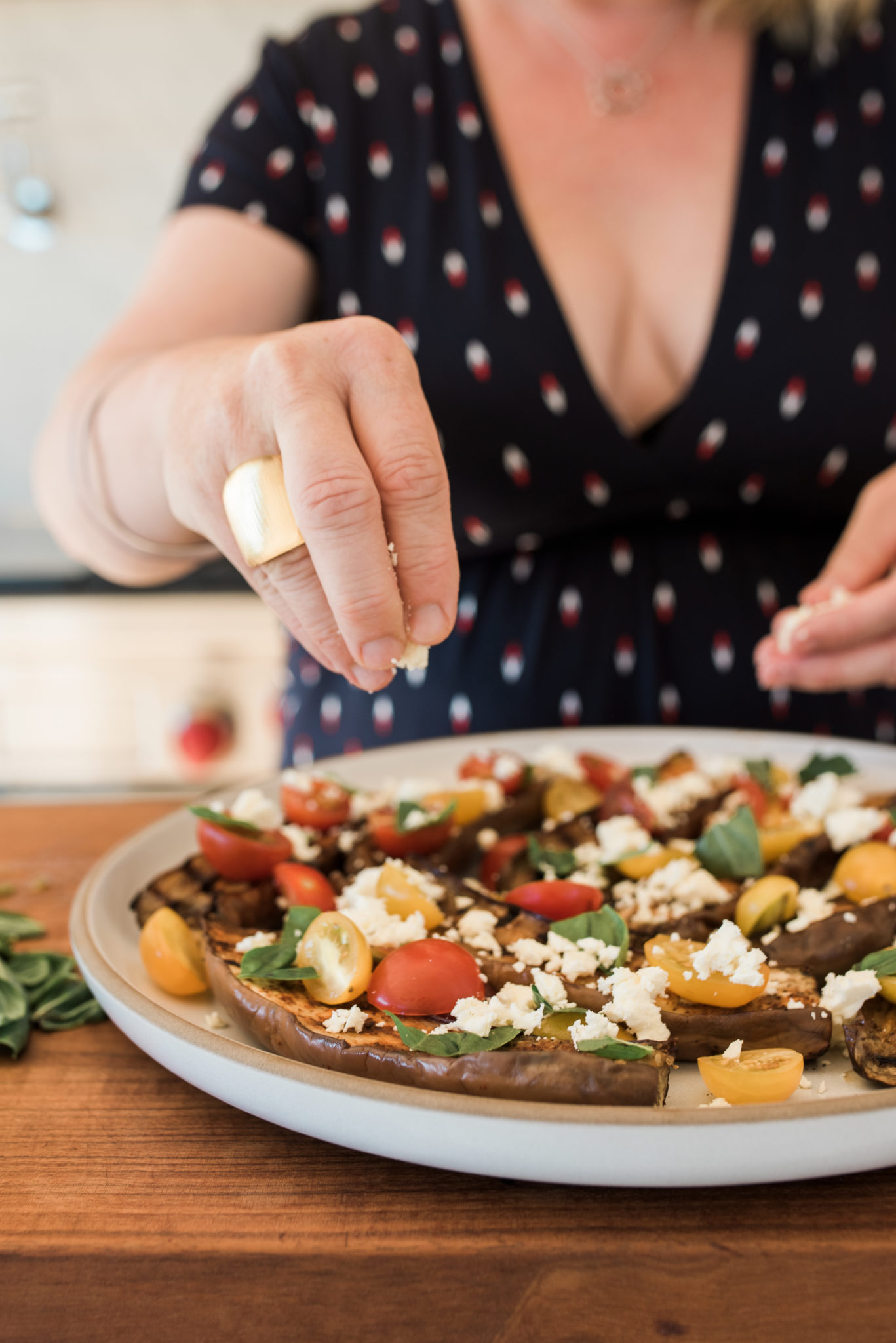 Greene and Rottman met in 2008 when they were both working for American Express in New York. Three years later they moved to San Francisco when Rottman accepted a job at Genentech. Greene, who had studied at the New York campus of the International Culinary Center, was then free to follow her foodie career, starting up the food education website JoyFoodly.com, and beginning her life’s work encouraging families to eat wholesome foods.

The couple, healthy eaters themselves, turn to their five raised planting beds for seasonal veggies and herbs. With the exception of some drought-resistant grasses and native plants surrounding the home, the only other altered land is a rough path to a seating area surrounding a gas fire pit, perfect for s’mores and taking in the view.

A long driveway accesses the home, and it was a permit requirement that it had to be wide enough at the top for a firetruck to turn around. Mork-Ulnes met the challenge with a soaring concrete carport at the ground level, creating ample room for a turnabout. The couple’s shared office (with facing desks) is tucked into one end of its base, and the other end offers an entry hall. Here hangs a welcoming abstract painting by local artist Alex Cole.

From the entry hall, two flights of precipitous stairs lead to the single-floor residence, painted completely white throughout with light-toned Douglas fir floors. The architect’s wife, Lexie Mork-Ulnes, provided the interior design, choosing minimal, contemporary furnishings that suit the airy feel. Everything was chosen specifically for Triple Barn, with the exception of a custom-made walnut dining table from their previous home that the couple plan to sit around for the rest of their lives.

The Carrara marble kitchen island does not have the customary cutout for stool seating, as Greene wanted it used strictly for culinary pursuits. They entertain often and never hesitate to assign friends slice-and-dice duties as guests gather round. The countertops are clutter-free, with all cooking equipment stored in drawers and the walk-in pantry, which also hides the microwave, coffeemaker, and other small appliances.

When their move-in day finally arrived, their annual theme was “The Year We’ll Be More Social,” so they invited everyone living in the homes nearby to a Pinot and paella party. The gesture quickly led to new friendships — further proof that the risk of forging a new path in Sonoma had been rewarded beyond their highest hopes. 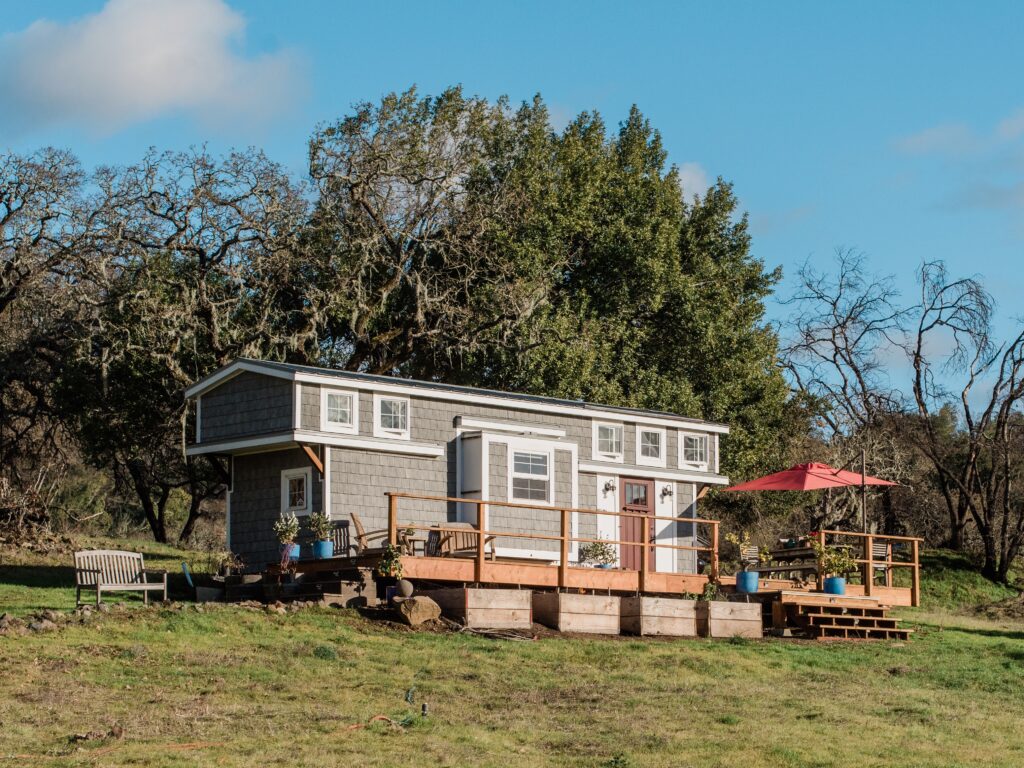 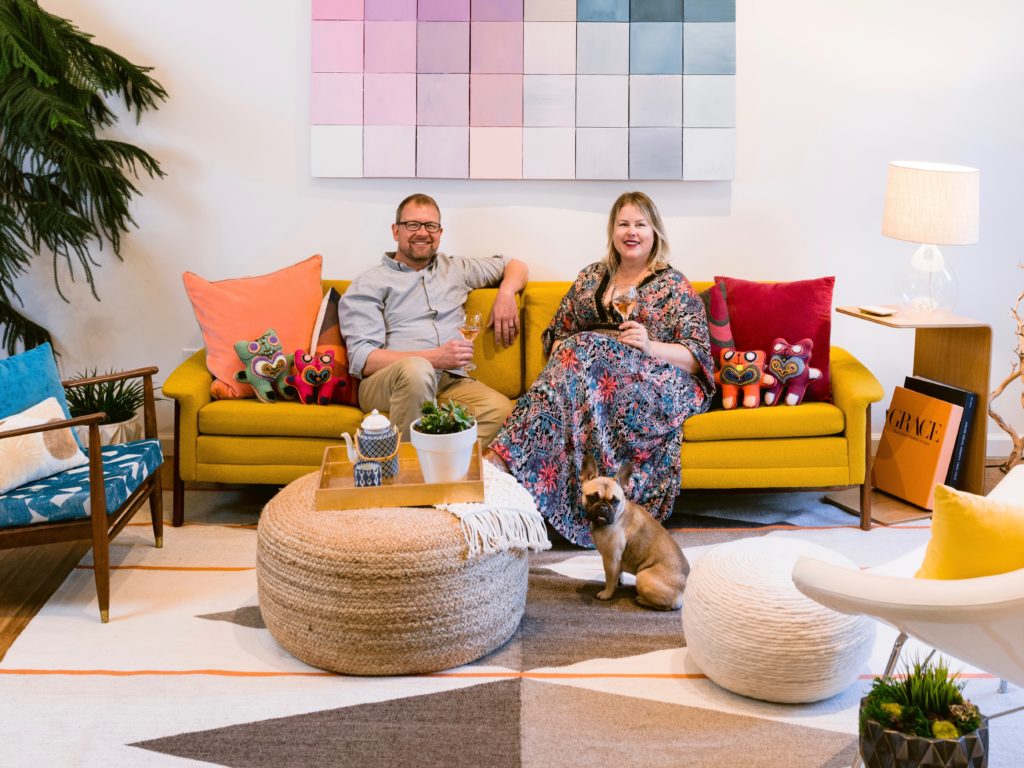 Over the past decade, Sonoma Distilling Co. owner Adam Spiegel has built a stellar reputation for his full-bodied whiskeys.