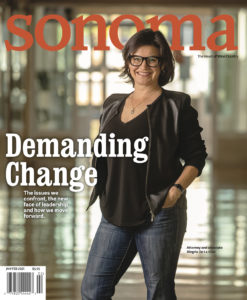 “Even once we get past this, how long will it take for those of us who like to hug people hello or goodbye to feel comfortable hugging?” asks Trebuchet guitarist Eliott Whitehurst.

It’s a fair question. Last year was a challenging one on many fronts, including big life changes for the members of the Petaluma band. Drummer Paul Haile and keyboardist Lauren Haile, the married couple in the group, became parents. Lauren Haile experienced unexplained hearing loss, which has caused her to adapt to different ways of performing. And live music came to a halt across Sonoma County as the coronavirus closed venues. All of this meant a longer- than-expected break before the recent release of the band’s third album, “It’s fine, I’m fine.”

Distance is a tough adjustment for a group so driven by their community. Over the years, Trebuchet has performed at countless local gigs and recorded with well-known North Bay musicians, including the Santa Rosa Young People’s Chamber Orchestra. They’ve played at notable festivals like BottleRock in Napa and Noise Pop Music and Arts Festival in San Francisco, and in 2019 they won Creative Sonoma’s “Next Level Grant,’ partially funded by the National Endowment for the Arts and intended to help local musicians advance in their careers.

“It was really cool, almost a community effort to get it done,” guitarist Navid Manoochehri adds.

The four bandmates met while studying music at Sonoma State University in the early 2000s. Playing together as students was a way to create a type of music their instructors could not teach. Thoughtful lyrics laced with graceful piano notes, power-packed drums, and intricate guitar riffs are hallmarks. At times a little melancholy, the music is always heartfelt and cathartic. “Sometimes I look back and think, this is so much emotion-wise, how dense the music is,” says Paul Haile. “It has a lot of weight.”

True to form, the record has a contemplative feel. This includes the title track, in which Whitehurst reflects on his dismay over the direction of the world and his decision not to have a child. “Anyone who’s at childbearing age or over a certain age has thought of all of the things in that song,” Lauren Haile says.

“SFCA” tackles the rising cost of living and the difficulty of making ends meet in the Bay Area. And “23” addresses the 2017 wildfires. Whitehurst explains he needed to take time to mentally process the devastation of the fires before he sat down to write. “It wasn’t super on-thenose about how horrific the fires were, but this was a huge thing that affected everyone around us,” he says.

Lauren Haile explains that while the music was recorded before the coronavirus pandemic, it resonates with this moment: “I know very few people who are navigating the world right now without an additional personal tragedy, whether it’s someone in your family or you yourself. Everyone’s feeling extraordinary stress on top of the global stress. We just need each other.”

Trebuchet recorded the album at a studio in Petaluma founded by two members of the band. They waited a while to release it but eventually realized there might never be an ideal time. “It was just like, ‘let’s just get this record out there,’ ” says Lauren Haile. “The album is called ‘It’s fine, I’m fine,’ and it feels more appropriate now than ever.”

Peek inside the bright, bohemian and beachy home of plant designer Lindsay Wallstrum.