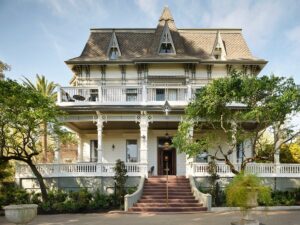 Peek Inside the Renovated Madrona in Healdsburg

Applewood Inn Is Now The Stavrand, Take a Look Inside 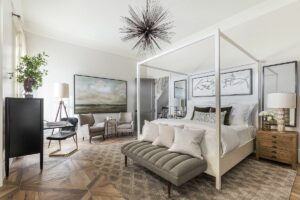 8 Cool, Unusual and Unique Places to Stay in Sonoma

Peek Inside the Renovated Lodge at Sonoma

A new luxury hotel has opened on ocean bluffs about 9 miles north of Fort Bragg, brimming with eye candy for naturalists and lovers of unusual architecture and décor. It also promises solitude, with just six guest rooms and the owner’s vacation home on the 2,000-acre parcel.

Located in the footprint of a long-gone lumber town, the Inn at Newport Ranch includes a three-bedroom hotel building (rooms start at $300 a night); Barb’s Room, across the parking lot from the main inn (starts at $250); the Redwood House, with three apartment-sized suites that range from $500-$775 a night; and Sea Drum, the owner’s four-bedroom house, which rents for $750-$1,200 a night.

Guests of the custom-built inn can enjoy vast views of rugged coastline and ocean, picturesque pastures where cattle graze and dense forestland, visible from throughout the buildings, porches, patios and hot tubs. They also can wander along more than 20 miles of trails on foot, all-terrain vehicles or horseback. Horses are available from the nearby Ricochet Ridge Ranch.

Those tempted to stay indoors can soak in the inn’s inspiring design and furnishings, which meld old-style craftsmanship, high-tech industrial design, antiques and found materials.

Many visitors do just that, said Creighton Smith, half of the husband-wife team who manage the hotel, which opened in September but remains a work in progress.

The outside of the cedar-shrouded main hotel structure — described online as “coastal ranch” style — at first glance resembles a cross between a high-end ski lodge and a farmhouse. But unusual details soon come into focus, such as the small metal-framed windows, one of many industrial touches that appear throughout the complex.

Others include light fixtures and heavy, barn-style sliding doors. The flooring varies from room to room. The main living room includes 30-inch old-growth redwood planks, some milled from logs left behind from the property’s mill days, and the events room has a turquoise-stained concrete floor inlaid with redwood burl.

Some of the furnishings defy categorization, like a massive hallway chandelier made largely from farm equipment found on the former ranch property.

Many of the door handles also are unique, including ones made from animal bones and a set comprised of ice-skating blades that belonged to the inn’s founder, Will Jackson, when he was a child, according to co-innkeeper Cindi Smith. He is now 87.

Jackson, a retired Wall Street investment manager whose primary home is in Vermont, began purchasing property in Mendocino County in 1986 after spotting an ad in the Wall Street Journal for an 850-acre cattle ranch with a bed and breakfast, the Orca Inn.

The following year, he purchased a vacation home on adjacent property, now called the Sea Drum.

Over time, he added more than another 1,000 adjacent acres to his holdings.

Jackson and his family began planning a new inn on the ranch nearly 15 years ago. They hired renowned Vermont-based architects Dave Sellers and Jim Sanford, known for their unusual designs and for incorporating nature into their buildings, and Los Angles-based design consultant Robin Cannell Baker, who also utilizes nature in her work.

Twenty-four redwood trees hold up the Redwood House, which opened in early December, stretching upwards from the lower level to the roof and bringing a magical, forested atmosphere to the three suites, each of which includes a kitchen, living room and deck with a hot tub and outdoor grill.

Tree trunks also are incorporated into the design of the main hotel building, with hallway and staircase walls paneled in thick, 5-foot-wide redwood slabs.

Some of the building’s counters also are made from redwood slabs, and one of its bathroom sinks is mounted inside an upright tree trunk.

The décor also includes whimsical touches such as a pair of cowboy chaps on the wall of the ranch house’s recreation room.

Jackson hired artists and artisans to construct the furnishings, many of them from Fort Bragg, and he chose Fort Bragg contractor Brent Anderson to head the construction team.

“We did as much as we could locally,” Creighton Smith said.

The property has a long, rich history.

Yuki tribes inhabited the area before lumber barons discovered the north coast’s mammoth redwood trees, according to a history of the coast.

Loggers arrived in the 1850s and built a series of mills along the coast, including one where the inn now stands.

The town of Newport grew up around the mill, then vanished when the trees within easy harvesting range were depleted. Lumber operations moved to Fort Bragg, which had a more easily navigable port, according to a history of the period.

It then became a ranch and later a bed and breakfast, which Jackson operated until about 1990, Smith said. About 150 head of cattle still graze the rangeland under a lease agreement with an area rancher.

Work on the inn itself is more than 90 percent completed, but its founder plans to continue to expand its uses in the future, including for educational field trips, Cindi Smith said.

Jackson — a retired partner in the investment council firm Brundage, Story and Rose — sits on the board of Shelburne Farms, a 1,400-acre working farm in Vermont that operates a nonprofit education center for sustainability.

His future plans for the Newport Ranch are in keeping with his preservationist goals, said Cindi Smith. “It’s his vision.”

You can reach Staff Writer Glenda Anderson at 462-6473 or glenda.anderson@pressdemocrat.com. On Twitter @MendoReporter