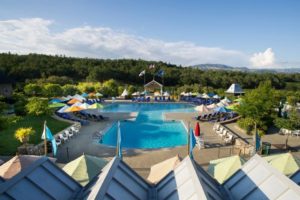 Winemaker Jason Jardine of Hanzell Farm & Vineyards, a historic winery perched high on the edge of the Mayacamas just outside downtown Sonoma, says that even after decades of experience with making wine, the energy of harvest season is unlike anything else he’s experienced. “It’s probably the most special time of year for me, when we’re all standing around the fruit that’s just come in, asking, ‘How does it taste? What tank is this going to go into? Are we going to do this Pinot whole-cluster?’ That’s when 99% of the winemaking is done, standing around in that circle.”

The team standing with Jardine in that circle is doing more than upholding tradition, however. Jardine is also a visionary organic farmer applying holistic practices to make the land healthy for food crops and livestock as well as grapes. The amount of old-school Sonoma winemaking history at Hanzell makes for an unlikely pairing with this cutting-edge approach—after all, it is a risk to change the way you farm 70-year-old vines. The de Brye family, which has owned the winery since the 1970s, is so committed to history that they haven’t changed the style of the wine labels in years. And yet, in another sense, Jardine’s goals are fitting, for the winery has always been ahead of its time. The landmark boardand- batten barn, for example, built by industrialist James D. Zellerbach in the late 1950s, contained all sorts of new technology for its era, including some of the earliest stainless steel wine tanks and one of the first on-site laboratories for analyzing wine chemistry.

Jardine built his career in organic farming and grape growing first in Oregon, where as 21-year-old newlyweds, he and his wife, Ali, were able to purchase a small property (they almost decided to plant blueberries instead of grapes). Later, he worked as a winemaker in Napa and Sonoma, not far from where he grew up outside Lodi. He arrived at Hanzell in 2014 with a dream of transforming the use of the land, operating in the tradition of such visionaries as author Jack London, whose 1910-era experimental farm is just a few miles up the valley. Jardine says it’s important to know that the level of sustainability achieved at the farm has its roots in traditional farming. “We’re not just some hippies up on the hill, doing this new thing that no one’s heard of before. We’re preserving history and really trying to honor it,” he says.

The diversity of species and opportunity for change were apparent when Jardine first arrived. Less than a quarter of the winery’s 200 acres are planted with grapes, and wildlife—deer, coyotes, turkeys, hawks—is all around. “Here, every small block of vineyard is isolated by these large areas of forest. You just feel like you’re not just in a vineyard, but that you’re part of the environment. You feel a responsibility to take care of the oak trees that are next to the grapes, and the bay laurel… It just opens you up to thinking beyond the vineyard,” Jardine says.

For Jardine and his colleagues, thinking beyond the vineyard means that grapes are just one of many living things the farm supports, and each of those living things, both cultivated and wild, has a role to play in balancing the farm’s overall output. Hanzell is home to 150 farm animals, from chickens and geese to pigs and sheep. The sheep and fowl, under the care of farm manager Brandon Brédo, are pastured in the vineyard several months of the year, where they can eat grasses and bugs and fertilize the vineyards with their manure. Two guardian dogs, Radley and Scout, protect the livestock from hawks and coyotes as they work through the rows.

The pigs are put to work primarily as fire suppression pigs: They eat through the underbrush in the oak woodlands, turning over the earth with their snouts as they forage for acorns and grubs, and tromping down small twigs with their heavy hooves.

“The animals are all doing different jobs,” says Brédo. “It’s like there’s a partnership. Like, the pigs will be rooting in one area, and there’ll always be three or four chickens hanging out with the pigs, because without the pigs, the chickens wouldn’t be able to get at those grubs or those seeds. It’s all of these sweet, interesting things that you pick up when you spend day after day with these animals.”

The animals are just one aspect of the farm’s overall green transformation. Over the past seven years, Jardine has worked with viticulturist José Ramos to change over the vineyards to organic production, and to stop tilling in between the rows. The mat of dried grasses on the floor of the vineyard helps protect the vines from heat, and not turning over the soil preserves microbes and helps sequester more carbon. “We have these massive cover crops that we crimp down, and that’s conserving a lot of moisture, protecting and putting armor on the soil,” explains Jardine.

No-till farming and regenerative agriculture are buzzwords in many vineyards around Sonoma County, but only a few can apply these methods to the degree that Jardine and Ramos are. “If we can make these adjustments that benefit the soil biology, benefit the wildlife and the longevity of the vines by creating a healthier environment—I mean, I just don’t get why you wouldn’t want to do it,” says Jardine.

For Ramos, who arrived at Hanzell in 1975 and raised his three children on the property, the switch to organic, no-till viticulture was welcomed. “I was so happy—it’s good for the ground, it’s good for the vines. To leave more grass, the vines say thank you. It’s like raising a little kid, you have to give them what they love,” says Ramos. Jardine calls Ramos Hanzell’s Zen master, a repository of 40-plus years of working knowledge of the land. Ramos knows intuitively when there’s something that needs attention in the vineyards, for example, and weeks ahead of time can predict the start of harvest down to the day.

The 2021 growing season has brought challenges at the winery. With low winter rains, the annual cover crops grew more slowly, which meant less natural forage for the farm’s livestock. Brédo had to bring in extra feed and adjust the grazing schedule in the vineyard blocks. Due to drier weather, the fruit set was excellent—but in April, a problem with a well pump meant that the winery was without irrigation for over two months. Going completely without water during late spring and early summer would have been a five-alarm emergency in many vineyards, but Ramos and Jardine were able to take the setback in stride. “I told everyone, ‘This is the test,’” says Jardine. “This is what we prepared for; this is why we farm the way that we farm. The vines should be able to adapt and get through this period.”

And that’s exactly what happened: The cover crops kept the soil cool and conserved existing moisture, and the vines adapted.

The well was back online by June, but in a year like this one, Jardine says he’s not using any vineyard water unless absolutely necessary. “I’m really grateful to be on a well, but we have to also be understanding that what we draw from the aquifer has an impact on our neighbors and the communities around us,” he says.

Jardine’s vision extends to the community in other ways as well. He is exploring more ways of increasing the land’s ability to produce food crops in conjunction with growing grapes. He believes he can extend the growing season, for example, so that he can get two rounds of food crops harvested in the time that it takes for the grapes to grow. The crops that currently grow in the vineyard and in the gardens feed everyone who works at Hanzell, from fieldworkers to sales managers.

And he is experimenting with growing grains like wheat and rye in between the vineyard rows. Imagine what’s possible, says Jardine, if you could double the production of the land by growing grains as well as grapes in the same space. “If we can find a way to feed the local community, all from our vineyard, that to me would be the ultimate. I would feel like I’d accomplished something in my life if I was able to pull that off. And we’re getting very close. We’re harvesting several thousand pounds of produce a year already.”

It’s the type of ambitious thinking that can change minds and change lives. “Stewardship is huge,” explains Brédo. “We’re upstream. Everybody’s upstream in a way, right? But we’re literally upstream. And our actions here, everything we do completely affects what happens downstream.” 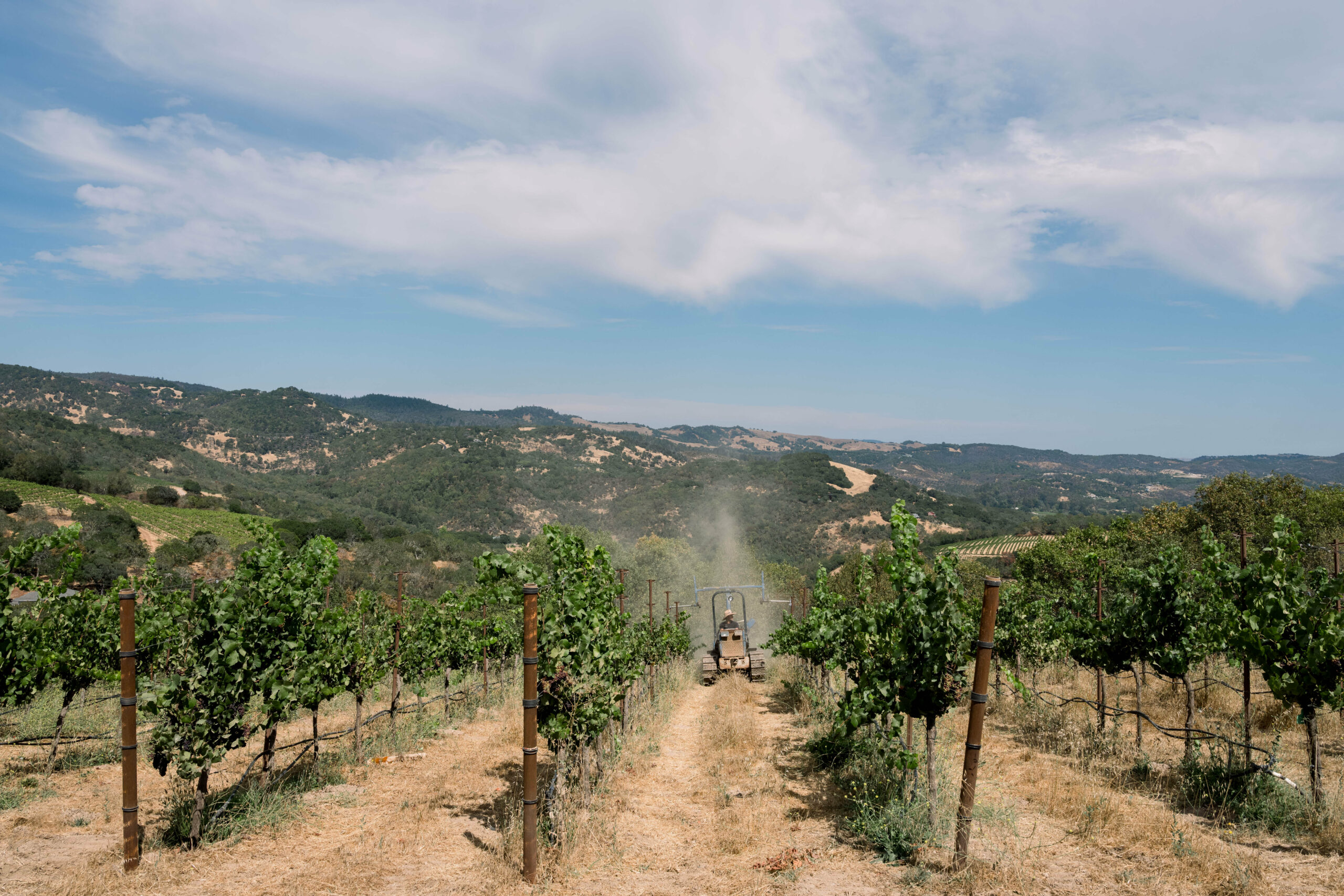 Farming practices at Hanzell go beyond the definition of organic. More importantly, says winemaker and president Jason Jardine, the holistic way they farm is not only better for the environment, but costs less, too. “Believe it or not, on a per-acre basis, I’m farming Hanzell for less than a lot of the conventional farms that I’m aware of,” he says. Some of the guiding principles that make the farm green include:

1. Extreme biodiversity: Hanzell is the opposite of a monoculture. On the 200-acre estate, only 42 acres are vineyards. The rest is primarily forest, with vegetable gardens and fruit trees mixed in.

2. No-till agriculture: Viticulturist José Ramos doesn’t use tractors to turn over the soil in between the rows of vines. The practice lowers water needs, maintains beneficial soil microbes, and locks carbon into the ground. Carbon released from tillage is a contributor to global warming.

3. Wildlife corridors: You won’t find fences around the vineyards at Hanzell. Deer, turkey — even coyotes and mountain lions — move freely throughout the property, and each has a role to play within the broader ecosystem.

4. Natural soil boosters: As cover crops break down in the vineyard, they add back nitrogen and other elements that were depleted by the previous year’s production. The livestock pastured in the vineyards also fertilize with their manure.

5. Fire-smart planning: Rarely a day goes by without the team tackling chainsaw work somewhere around the property. The pigs that graze the forest also lower the fire risk, and in the future, Brédo would like to incorporate prescribed burns and pile burning.

6. Food crops in the vineyard: Jardine integrates food crops like fava beans and yellow peas into the vineyard cover crop — he’s also tried squash and tomatoes. Earlier this summer, he completed a trial of a variety of rye that he hopes to grow as a grain crop in between the vineyard rows.

7. Few outside inputs: Ramos doesn’t apply additional fertilizer in the vineyard, and the livestock mainly eat what’s grown on-site, including silage put up in spring. (This year, due to drought, they did need to bring in additional feed.) Many cover crops reseed on their own, and vegetable gardens are planted with seeds saved from the year before. Non-native trees that are removed to manage the forest are milled into lumber.

8. Using less water: In the middle of a punishing drought, this may be the most important green principle of all. Since Hanzell switched to no-till agriculture in 2014, says Jardine, the farm has lowered its water use in the vineyards by 80%. “This is how we have to farm in the future,” he says. “There’s no other way.”

Peruvian restaurants are popping up all over Sonoma County. Here are a few favorites.