In 1993, one of Sweden’s most famous artists, Magnus Uggla, released a single titled “I Never Dance Sober.” The catchy pop tune, which took inspiration from the Cicero adage “nemo enim fere saltat sobrius, nisi forte insanit (no one dances sober, unless he is insane), struck just the right note with the Swedish audience—it soon became the soundtrack for debauched dance moves in suburban living rooms and city clubs.

When I, a Swedish transplant in Sonoma County, heard about an upcoming alcohol-free “yoga dance party” taking place on April 27 at the Finley Community Center in Santa Rosa, I could only imagine my fellow countrymen’s reaction. “A room full of sober people shaking their lycra-clad bottoms? No, thanks.”

Thankfully, living in the United States has broadened my horizons and I found myself getting curious about the event. By the time I learned it would be headlined by someone called “MC Yogi,” I was intrigued. I envisioned a grey-bearded, longhaired man from India, spinning records crosslegged.

As I dug deeper into this yoga dance phenomenon, I realized that my absence from dance clubs, Sweden and, until recently, yoga studios had left me a little out of touch. MC Yogi seemed to have no resemblance to my idea of a yogi—at all—and there is now a growing number of people, Swedes included, who enjoy dancing sans alcohol.

According to those in the know—The Guardian, The New York Times and The Washington Post—sober dancing has been “trending” on the international club scene for the past five years. The trend even includes an early-morning rave called “Daybreaker” that begins with an hour of yoga at 6 a.m. followed by two hours of dancing. In Stockholm, there’s now a nightclub called Sober.

In contrast to my antiquated vision of a yogi, MC Yogi is a yoga teacher who is also hip-hop artist and music producer from West Marin with 115,000 Instagram followers. His signature look includes dark-rimmed glasses, a fedora, hoodie, and jeans (he does have a beard, but it’s neatly trimmed). Off stage, he goes by the name Nicholas Giacomini. Friends call him Nick.

Giacomini has been practicing hip-hop beats and yoga poses for more than twenty years. Today, he divides his time between his Point Reyes yoga studio, which he runs with his wife Amanda, the recording studio, and wellness-focused festivals like Squaw Valley’s Wanderlust. He is passionate about a variety of things—his dedication to yoga and music combine with a love of art. At 39, he has achieved the meaningful existence and calm equilibrium that you might expect of a yogi. But life for Giacomini was not always lived in harmony.

As a teenager growing up in a prominent West Marin ranching family, Giacomini got caught up in “a world of drugs and chaos.” Arrested for vandalism and kicked out of three schools, he ended up in a home for at-risk youth. When he discovered yoga at the age of 18, the practice became his pathway toward a different destiny.

“It was the best feeling I had ever experienced,” says Giacomini, when thinking back on his first encounter with the centuries-old Eastern practice. “No drugs, no intoxication…I just felt so good.”

Yoga then became a major influence in Giacomini’s life: he travelled to India where he stayed in ashrams and collaborated with local musicians; then he journeyed across the United States and studied yoga with masters like Larry Schultz, the Grateful Dead’s personal yoga teacher until the mid 90s.

Eastern philosophy, mysticism and sounds soon made their way into Giacomini’s music. Songs like “Be the Change (The Story of Mahatma Gandhi),” “In Love We Trust,” “Breath Control,” “Rock on Hanuman,” and “Road Home” became “a reflection and expression” of the insights he gained by practicing yoga and meditation, as seen through the lens of his personal experience.

Now, back where “it all started” in Point Reyes, Giacomini says he had to “travel across the Earth” to really appreciate the area in which he grew up and to realize that “home is always inside of you.” On April 27, he will bring his brand of spiritual beats to Sonoma County.

This will be the second time MC Yogi has performed at the Finley Community Center—in 2017, some 150 people attended the event. This year’s event, organized by Santa Rosa’s Yoga One, will feature a two-hour masterclass with MC Yogi—a vinyasa, flow-style yoga session suitable for all skill levels.

The end of the class will be accompanied by live classical music—Shane Davis, a local yoga teacher and classically trained pianist, and cellist Diego Mendiola will perform a “Savasana sound bath.”

Then, just as you’ve found your inner zen, it’s time to roll up the yoga mat and cut the rug. MC Yogi and DJ Crisanto from Southern California will rock the audience with tracks like “Road Home” and “Dancing in the Sun” from the album “Only Love is Real,” and newly released single “Triumphant.”

In addition to the yoga and the dancing, event-goers will also be able to check out yoga outfits from Twisst Healdsburg and mats from OMGI, meet with practitioners from Well Sonoma, an integrated holistic collective, and get the right “yoga hair” (this is apparently an established expression) with the help of Aveda representatives.

And, while there won’t be any alcohol, there will be probiotic drinks. See you there. Namaste! 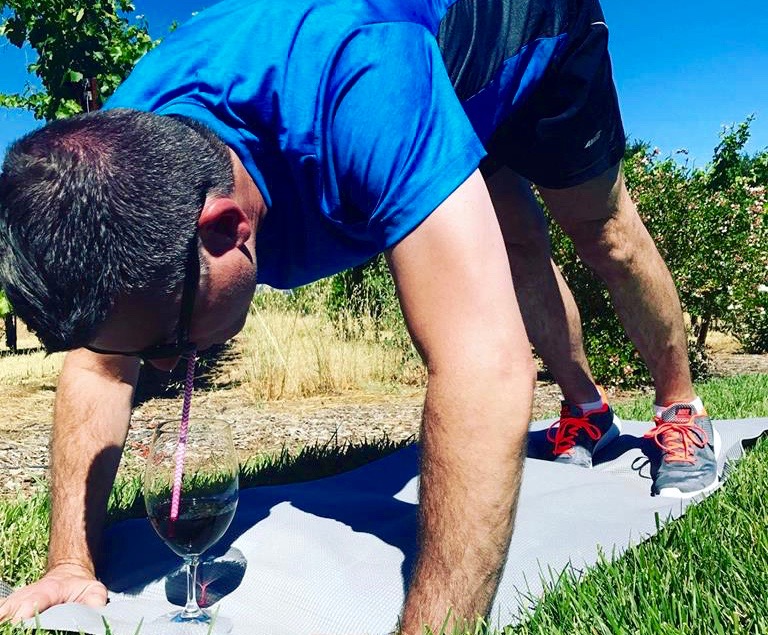 Pair Wine Tasting with Yoga at These Sonoma Wineries

Padma Lakshmi and Alice Cooper will be featured at BottleRock