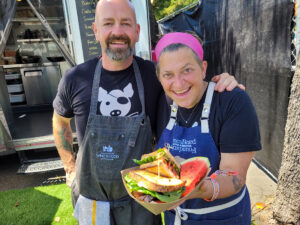 After several days of closure due to “equipment repairs”, locals are asking whether Bistro M on the Windsor Town Green will reopen.

It’s a question I’ve been unable to get an answer to since mid-week when a BiteClubber noticed a temporary closure notice on the door of the restaurant. Calls and emails to owners Bryan and Matthew Bousquet have gone unanswered, adding to speculation that this may signal the end of M.

The couple have their hands more than full with the rather unexpected success of their new venture Momma Pig, which opened several weeks ago. Talking to BiteClub just after opening, Bryan said that the restaurant was set to do over a thousand covers in just a few days. Part of the reason for closing Mirepoix and opening the barbecue spot, according to Matthew, was to allow the couple more time with their young daughter. Operating two restaurants doesn’t exactly facilitate a lot of spare family time.

Stay tuned for more news as I find out.

Hidden bar in the heart of the Alexander Valley