Some days all you need is a little walk through the woods, with enough ups and downs to make the blood pump and enough shade to keep you cool. If it comes with a little refreshment at the end, who could complain?

That’s the formula for this “only in Sonoma” hike, the 2.4-mile Bartholomew Memorial Park trail. It packs a workout into a 90-minute loop, takes you through a deep oak woodland and, in the process delivers postcard-worthy views of the Sonoma Valley, two historic wineries and, when the weather cooperates, the Golden Gate Bridge.

Turn the outing into an occasion by packing a picnic to eat on the landscaped grounds and pairing it with a bottle of wine from Buena Vista Winery or Bartholomew Park Winery. Both maintain tasting rooms within each reach.

The entire park was once home to Hungarian Count Agoston Haraszthy, who planted grapevines there in 1861 and built the Buena Vista winery to process them. A villa for his family soon followed.

Less than a decade later, the vines were wiped out by Phylloxera and Haraszthy abandoned them. He died in 1869 in Central America, and his villa later burned. It was replaced by a replica.

The overgrown property was purchased in 1943 by a war correspondent named Frank Bartholomew and his wife, Toni. They eventually sold the winery. After Frank’s death, she created the memorial park and built a replica of the count’s villa. It now holds the Bartholomew Park Winery’s tasting room.

Visitors can park near the villa and hike the loop in either direction. About midway, Benicia’s Lake is a natural shady rest stop. During wet months it is filled with pollywogs, singing frogs and mosquitoes.

Benches are located on either end of the loop, providing another chance to stop and drink in the scenic landscape below. 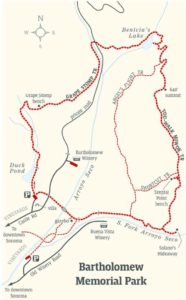 (Closed from January 1 to April 1)

Exposure: a mix of open meadows and shaded forest

Bartholomew Memorial Park is a little known gem tucked into the hills less than two miles northeast of Sonoma. The 375-acre park leases part of its diverse land to Bartholomew Winery. This hike is not a meandering stroll through a winery, it only begins and ends there. The trail is a backcountry hike winding through oak-covered mountain slopes and redwood groves. The hike follows portions of Arroyo Seco and the South Fork of Arroyo Seco to a pond, lake, cave, and two impressive overlooks.

From East Napa Street by the Sonoma Plaza in downtown Sonoma, drive one mile east on East Napa Street to Seventh Street East. Turn left and continue 0.3 miles to Castle Road. Turn right and drive 0.4 miles to the Bartholomew Park Winery entrance. Enter the winery grounds and go a quarter mile to a road fork. The right fork leads to the tasting room. Veer left 0.1 mile to the trailhead parking lot.

From the north end of the parking lot, -follow the posted trail 40 yards to Duck Pond. Curve right along the east side of the pond to a trail gate. Pass through the gate and cross a stream in an oak, manzanita, and madrone forest. Climb the hill on the Grape Stomp Trail and traverse the slope, parallel to the stream. Head up the shaded draw and recross the stream. Climb steps and zigzag up the hill to Grape Stomp Bench and an overlook of Sonoma and San Pablo Bay. Weave along the contours of the hills with small dips and rises. Descend to a fork of Arroyo Seco Creek by a private road.

Rock-hop over the creek and cross the road. Climb eight steps and head up the forested hillside. Follow the north side of Arroyo Seco Creek, passing above Benicia’s Lake. Descend steps and hop over the creek upstream of the lake. Enter a redwood grove with Douglas fir and continue climbing. A side path on the right leads to the east shore of the lake. The main trail continues to a posted junction at one mile. Angel’s Flight Trail descends to the right for a slightly shorter and easier loop.

Bear left on the You-Walk Miwok Trail, climbing to the 640-foot summit that is just past a bench. On clear days, the vistas extend as far as the Golden Gate Bridge. Descend from the upper slope, with the aid of dirt and log steps, to the Shortcut Trail on the right. Stay straight 20 yards to a side path on the right to Szeptaj Point bench, with beautiful views of Sonoma from under a canopy of oaks. Continue downhill on the main trail to a posted junction. Detour to the left 80 yards. Follow the South Fork of Arroyo Seco upstream, passing small waterfalls. Continue over mossy boulders to Solano’s Hideaway, a massive rock formation with caves. Solano was an Indian chief of the Suisun Tribe and a friend of General Vallejo.

Return to the junction and continue west, passing a junction with the lower south end of Angel’s Flight Trail. Pass through a trail gate and skirt the backside of the Buena Vista Winery. Pass through a second gate to a narrow paved road by a gazebo on the left. Cross a rock bridge over Arroyo Seco Stream and follow the path on the right side of the road. Cross Castle Road and complete the loop at the trailhead parking lot.