Glen Ellen residents Lauri and Tim Dorman, who lost their ranch home in the 2017 Nuns Fire, found a key source of recovery and resilience in their three adult children.

Just days after the fire, the family all spread out around a big table at the home of their oldest daughter in Marin. Working from a cluster of laptops, the couple’s children kicked off the long insurance process and notified the couple’s many friends. “The kids didn’t want us to have to tell that story over and over,” explains Lauri.

“This is what we trained for as a family,” says Tim, noting how fortunate they were to have their kids’ support. “And their technology!” laughs Lauri.

The couple brought plenty of professional skills to the process of rebuilding. Lauri, a former operations director at a large catering company, found meaning in managing small details. “Give me a spreadsheet, and I’m in hog heaven,” she says. “In many ways, that’s how I got through.” Tim, an executive and leadership coach, is steeped in the art of listening. 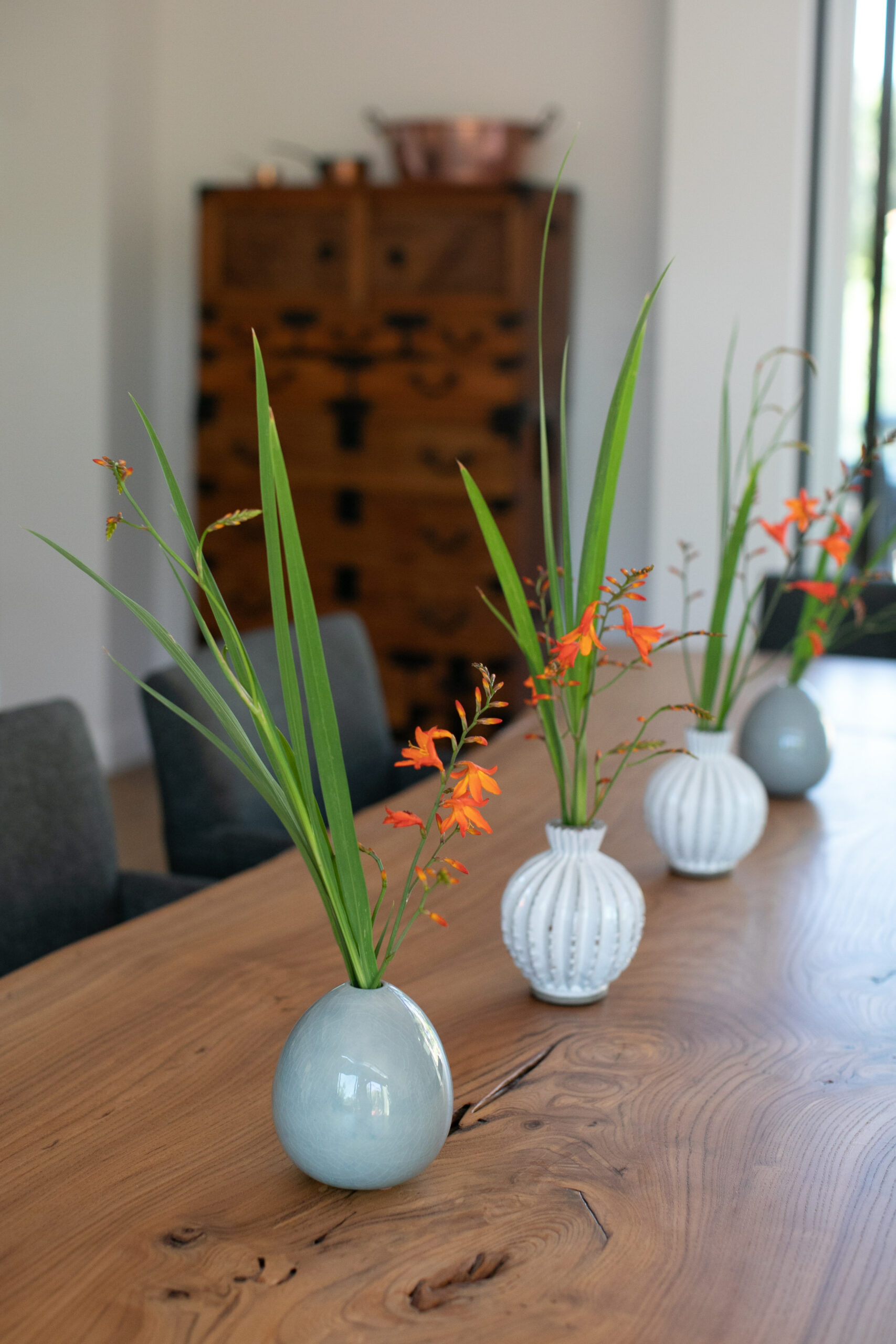 In mapping out their own plan of reinvention, he says they were guided by an overarching sense of purpose, a plan to figure out how to recapture their joy. “When you lose everything, life hands you a blank canvas,” he explains.

Early on, they met with an architect to discuss rebuild options. They soon decided a custom “stickbuilt” home wasn’t affordable or fast enough for the timeframe they had in mind. Instead, they settled on a prefab Breezehouse by Blu Homes—a modern structure with open views through large windows.

A year and a half after the fire, the home’s three main modules, with nearly all interior elements already in place, including appliances, cabinetry, and tilework, arrived on trucks at their lot in Glen Ellen. The entire Dorman family gathered alongside friends and neighbors to watch as a crane lowered the modules onto their new slab foundation—a process that took just a couple of hours. As the crane operators worked, family and friends celebrated with glasses of wine and a special playlist of songs centered around the theme of home.

The layout of the new home fits well with how the Dormans like to spend their time. A large deck overlooks the yard, where they garden and keep honeybees. In the large dining area just off the kitchen, a new table was custom-built from a salvaged oak tree.

“We needed something with some soul,” Lauri explains. “Nearly everything in the house is brand-new.” In decorating, they say they didn’t want to replicate the possessions and furniture they once had, which included antiques and other finds from years spent living abroad. Instead, they now find meaning in new pieces, like the handmade quilt that sits at the end of their bed, a gift from a colleague of Tim’s brother. Or the desk in the office, which their son and a friend fabricated from a backyard oak that was in the path of the fire. The heavy oak grain enfolds long, gray burn marks.

Outside, the couple sees meaning in nature’s resilience. Their small collection of olive trees is a mix of ones they planted anew after the fire and three others that burned, were cut down to stumps, and, to the couple’s surprise, regrew beautifully. A half-charred oak still survives, as does a treasured Gravenstein apple tree that Lauri harvests each year to make applesauce with her grandchildren.

The resilience of these trees isn’t lost on the couple. “If the oak can recover,” Tim says, “so can we.”

They credit friends and neighbors with bolstering their resilience. Early on, Lauri’s friends from the local beekeeping group coordinated housing.

Another friend blanketed their entire neighborhood in over 5,000 daffodil bulbs—a sign of hope in that first difficult spring after the fire. The gratitude came full circle during a special service at Kenwood Community Church, where their son spoke to the congregation, thanking them for their support of his parents.

In the early weeks after the fire, Tim recalls thinking it would have been easier for the couple to pack their bags and start a new life somewhere else. But that changed as they saw friends in their community stand “shoulder to shoulder” with them. “We made a full commitment to the people who were fully committed to us,” Tim says. “We were overwhelmed by the intensity of it.”