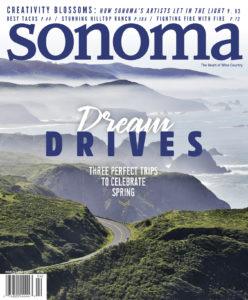 Ned Kahn’s uniquely engineered kinetic artwork — all hinged squares, flapping chain mail, patterns, and shapes — is displayed in public places around the globe and someday soon it could fly aboard the International Space Station. Though usually constructed on a grand scale — resulting in huge, reflective expanses that respond to wind and shifting air currents — Khan’s latest endeavor treats his Sebastopol neighbors to a temporary collection of smaller pieces right downtown, on Depot Street.

On the site of the future Hotel Sebastopol, artist and MacArthur genius grant winner Ned Kahn has created a kinetic installation called the “Air Garden.”

Kahn and his “trusty right arm,” Santa Rosa artist and ceramicist Todd Barricklow, erected the sculptures on the future site of Hotel Sebastopol — a development project currently on hold because of the pandemic. Kahn and Barricklow are calling the 1¼-acre area the “Air Garden,” a tribute to Kahn’s fascination with structures that make air visible — and, he hopes, render it more vibrant in the consciousness of those who see his work.

The sculpture garden is temporarily enclosed by a chain-link fence, for safety and security reasons, but Kahn hopes there will soon be opportunities to invite the public to experience the work up close. And when his crew is done moving heavy equipment and cranes around the lot, he plans to seed native grasses and flowering plants, creating “a little oasis of nature, kind of embedded in the heart of the town.”

Already there’s a 30-foot twisting tower of white Teflon pieces, a large “wind hammock” stretching 44 feet across, a series of sunset-colored panels, and a suspended circular piece that looks like a dream catcher. Passersby “have been so nice,” says Kahn. “That’s been probably the funnest part of the whole thing. All the feedback has been super positive.”

Kahn, who was named a MacArthur Fellow in 2003 (winning what’s commonly known as the “genius grant”) is best known for huge, shimmering arrays of metal and other materials set in motion by the air. He wants to do more than make strikingly vivid artwork, however. He hopes to inspire love for the air that animates it.

His work has always shown a fascination with physics and movement — the ways in which fog and light, sand, or even seeds can be coaxed and manipulated into intriguing scenes of beauty. “If you could alter people’s sense of stewardship and love for the Earth and the atmosphere and the air, then maybe you could change the way they feel about the air. Because the air, being invisible, it’s so easy to forget about it,” explains Kahn. Make it visible, he says, and people will remember.

“I guess my hope — and maybe it’s just a fantasy — is that some small number of people, when they see the air, how beautiful it is, it will shift their thinking, their relationship with the air and kind of fall in love… You love your kids so much you would do anything for your kids. If you had that same feeling, or even a trace of it, for the air …” he says, his voice trailing off.